These robots are here to help

The Kinova Arm is built to empower humans, to complement and augment their capabilities at work and play.

There have been numerous developments in the world of robotics, resulting in robots being more user friendly, empathetic and intelligent than ever.

While they may not be as affordable as we’d like them to be, robots can be empowering and effective in many fields including education and health.

They are able to perform many tasks and applications as well as interact with a whole host of people, gather data and be precise and consistent in their tasks.

Here’s a short list of some of the robots that Dr Hanafiah Yussof works with at his office in Cyberjaya:

This sixth generation humanoid robot comes with speech recognition capabilities, allowing it to communicate in more than 20 languages. It is also able to detect when a fall is imminent and protect itself, and if it does fall, NAO is able to stand up on its own. With new built-in cameras with a 68.2° field of view and autofocus, NAO6 can detect people easily.

NAO6 is also able to hear and understand a lot better, making dialogue a full part of its interaction. You can tell when it’s listening as its eyes light up.

Thanks to new motors, NAO6 can move longer without overheating. It is also more connected than ever with Bluetooth and WiFi.

NAO is viewed as a teaching aid tool, especially for promoting inclusivity, and allows for barrier-free communication.

Pepper is designed to be used in professional environments. With numerous sensors (including two 5-megapixel cameras and one 3D camera), Pepper is able to see and detect people in its environment.

It can attract their attention and invite them to approach and interact with it. When Pepper sees that someone is looking at it, the robot engages in dialogue with the person, and provides him or her with a service. Sanbot (left) and Pepper, two of the robots that come in handy for businesses.

Pepper has a touchscreen which increases its capacity to interact and enables it to provide more information, particularly in graphic form. Pepper is able to understand and express itself in numerous languages; and is also able to analyse and empathise the emotional state of people who come into contact with it.

When WiFi is available, Pepper is able to access advanced voice recognition and emotional analysis services.

An entirely programmable platform, Pepper offers infinite usage possibilities in professional environments. At 120cm tall and 28kg, the robot is much larger than NAO – it moves on omnidirectional wheels and has navigating capability.

This one is a cute omniwheel mobile robot platform which can come in handy for STEM education and hobbies. It has a fully programmable Arduino-based controller board and is lightweight and easy to assemble. 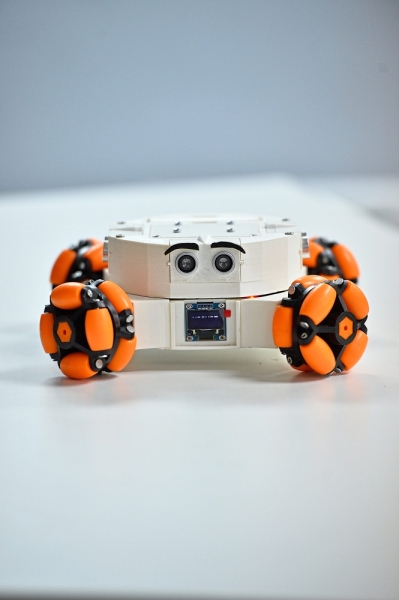 Rookie, a lightweight and easy to assemble mobile robot.

It uses open-source hardware and software and its programming is based on Arduino (Script) and Visual Language Programming (VLP).

Its interactive software can be tailored to one’s ability (beginner, intermediate, advanced) and ready made modules are available for customisation and integration. Anyone from a primary school student to STEM educators and robotics trainers and developers would find Rookie exciting.

Built to empower humans and augment their capabilities, the Kinova Arm is made from lightweight carbon fibre, is durable and weather-resistant. It comes with grippers – three flexible fingers which are able to firmly grasp objects of varying shapes and sizes.

Almost any power wheelchair is capable of full robotic arm integration, and it uses its own accumulator to provide energy to the arm.

The Kinova Jaco service robot can be mounted on a wheelchair and controlled using the chair’s joystick.

It will be able to help someone who is wheelchair bound reach for high objects, hold and grasp objects and assist those with mobility issues.

For more information on these robots, go to www.robopreneur.com.