At the Samsung Galaxy Unpacked event in San Francisco last week, the electronics giant announced that it will continue to deliver interesting innovations that beats users’ expectations.

“For those who say everything possible has been done, open your mind for the dawn of a new mobile era. Buckle your seatbelt as the future is about to begin,” said the president and CEO of IT & mobile communications for Samsung Electronics, DJ Koh.

Samsung kicked off the event by showing off its Galaxy Fold, the company’s much-awaited foldable smartphone with the Infinity Flex display.

It took the company eight years to debut a workable foldable device following the reveal of a prototype with flexible display in 2011.

Now, the device is ready to be shipped worldwide on April 26. It has a 4.6in HD+ Super Amoled ­display on the outside and a 7.3in QXGA+ dynamic Amoled screen on the inside that folds out like a book. 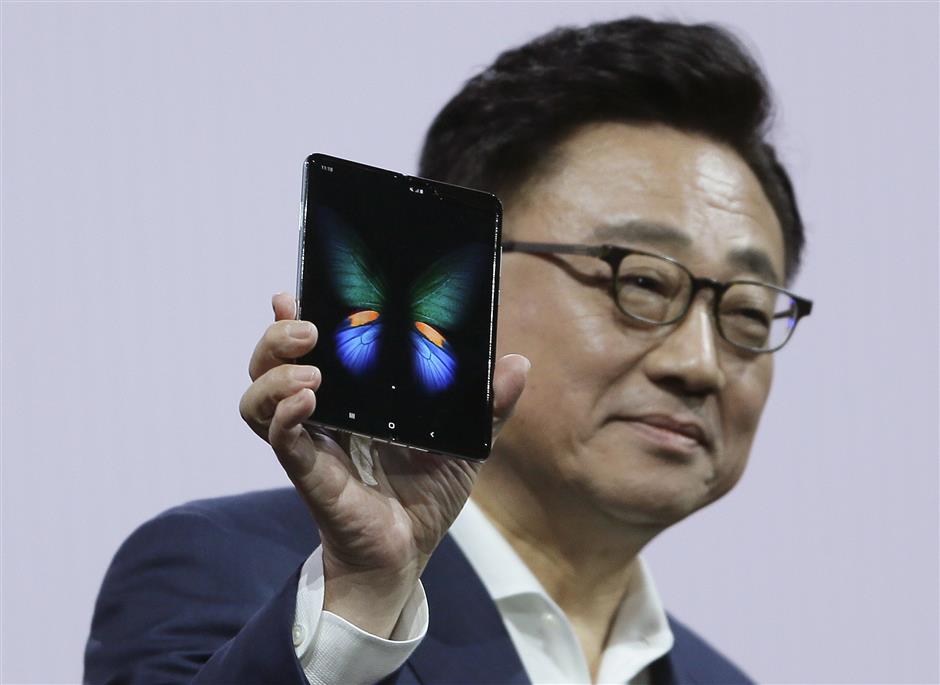 Koh holding up the Galaxy Fold which has a 7.6in screen that folds and six cameras. — AP

“We created the Galaxy Fold for those that want to experience what a premium foldable device can do, beyond the limitations of a ­traditional smartphone,” Koh said.

The device is equipped with a next-generation octa-core ­processor and has 12GB RAM and 512GB storage.

Samsung showed a demo of how the Galaxy Fold could easily run three apps like YouTube, an Internet browser and a messaging ­application all at the same time.

The device runs Android 9.0 and comes with a 4,380mAh battery capacity.

The price of making a foldable phone commercially available to users? It’s a whopping US$1,980 (RM8,050).

The Galaxy S series has ­definitely come a long way since the first model back in 2010 which had a 4in Super Amoled display, Exynos 3 processor, 512MB RAM and 5-megapixel ­camera.

Fast forward to now and the ­company’s new Galaxy S10 smartphones are packed with features.

All new models under the series – the Galaxy S10, S10+ and S10e – have an all-new dynamic Amoled display that’s HDR10 (high dynamic range) certified. The screen displays vivid digital ­content with a wider range of ­colours, and deeper blacks and brighter whites.

Samsung even claims that the colours remain accurate even under harsh sunlight.

Both the Galaxy S10 with a 6.1in display and the larger S10+ with a 6.4in display have a 93.1% screen to body ratio, offering more real screen estate while minimising distractions.

The two smartphones also have an Ultrasonic Fingerprint Scanner embedded under the screen that reads the 3D contours of a ­physical thumbprint and not just a 2D image for improved security.

The smaller-sized Galaxy S10e with a 91.6% screen to body ratio has the fingerprint reader on the power button on the side. From left: The Galaxy S10, S10 5G, S10+ and S10e smartphones have multiple main cameras, including one with an ultra-wide lens with a 123º field of view like the human eye, so what you see is what's in frame. — Bloomberg

The Galaxy S10 and S10e have a 10-megapixel selfie camera on the front while the S10+ has an additional camera – an 8-megapixel RGB depth sensor.

All the sensors on the front, including the camera, is housed in a pinhole so you get “more screen”.

The Galaxy S10 and S10+ has three main cameras on the back, a first for the Galaxy series.

The ultra-wide lens has a 123° field of view like the human eye, so what you see is what’s in frame.

The Galaxy S10e has twin cameras on the back – 16-megapixel with ultra-wide shots and 12-megapixel sensor for wide angle shots.

All three models feature Wireless PowerShare – the back of the phone can be used to charge other devices that adhere to the Qi standard, including phones like the Note 9 and Galaxy S9, and accessories like the Galaxy Buds wireless earbuds.

The Wireless PowerShare ­feature will automatically turn itself off once the device being charged reaches 100%. 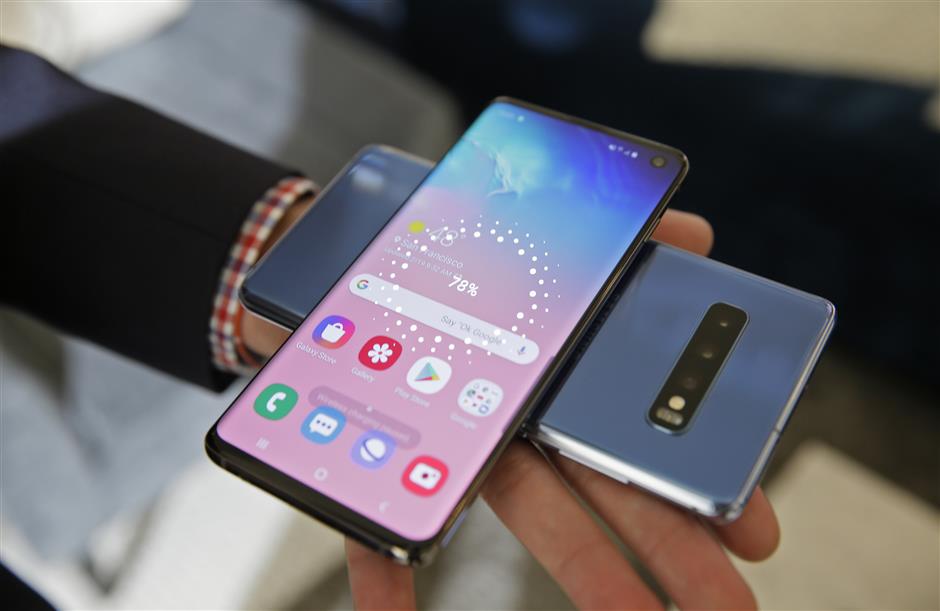 The Galaxy S10 is capable of wirelessly charging other phones. — AP

The Galaxy S10, S10+ and S10e will be available in Prism White, Prism Black and Prism Green. On top of that, the Galaxy S10+ will also come in two all-new colours – Ceramic Black and Ceramic White.

The pre-order period is until Feb 28 and while stocks last, and the smartphones are expected to hit store shelves nationwide on March 8.

Samsung also unveiled its first flagship 5G smartphone – the aptly named Galaxy S10 5G – so your phone will be future-proof when the 5G networks take off.

The Galaxy S10 5G model has two supersized features – a 6.7in dynamic Amoled display, the ­biggest ever on a Galaxy phone, and a 4,500mAh battery. 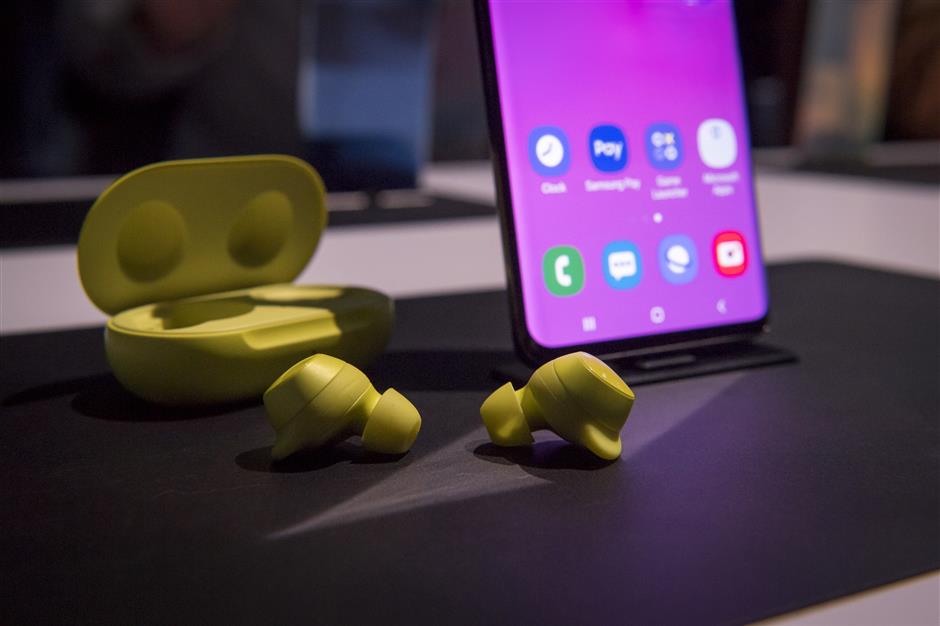 The 3D depth camera comes in handy for applying Bokeh effects on video – not images, mind you – and measuring distance.

With a 5G network, the phone is claimed to be able to download a full season of a TV show in just ­minutes. Users will also be able to lose themselves in graphic-heavy Cloud games with no frustrating lags and stay in touch with friends and family via real-time 4K video calls.

Sadly, this model will only be available in select markets with 5G carriers.