Big Tech firms march to the beat of Pentagon, CIA despite dissension

Mountain View, Calif., home of Google, is joining other tech centers in pondering new taxes based on employer headcounts -- levies that could jolt Apple and Google -- but if voters endorse the plans, a fresh wave of such measures may roll toward other corporate coffers. (Dreamstime/TNS)

WASHINGTON: A funny thing has happened to Google and Amazon on their path toward high-tech success: They have become crucial cogs in the US national security establishment.

Both companies are expanding teams of employees with security clearances to work on projects that include deploying artificial intelligence and building digital “clouds” to offering law enforcement facial recognition tools that can even read the mood of people caught on camera.

The security establishment's embrace of Big Tech has ruffled the feathers of traditional defence contractors and roiled employee ranks, in Google's case, over whether the company is being drawn into what disgruntled employees called “the business of war”.

“They are becoming a critical part of national security, without question,” said Alexander Rossino, a senior principal research analyst at Deltek, a Herndon, Virginia, firm that offers software and services to defence contractors.

In some ways, the evolution of companies born to disrupt the status quo into business giants with a broad array of clients, including the security establishment, is a result of the profits to be made doing business with the federal government.

The Pentagon currently is testing a customised Google AI surveillance engine that sifts through massive amounts of footage from tactical drones to produce what it calls “actionable intelligence and insights at speed”. The tests are under way at six locations in Africa and the Middle East. Such drone footage has been used in the past to target and kill ISIS extremists.

The pilot, known as Project Maven, spurred nearly 4,000 of Google's 88,000 employees to sign a petition in April demanding that the project be cancelled because it would “irreparably damage Google's brand”. The petition added: “Building this technology to assist the US government in military surveillance – and potentially lethal outcomes – is not acceptable.”

The internal protest about Project Maven appeared to be taking a toll. The tech website Gizmodo, citing three unnamed sources, reported Friday afternoon that a Google executive told employees earlier in the day that the backlash over Project Maven had been severe and that the company would not pursue further artificial intelligence work with the Pentagon.

Google declined to answer questions about Project Maven, and a spokeswoman for the Mountain View, California, company did not answer broader queries about the company's activities in the national security sphere.

For most of its life, Google operated with the motto “Don't be evil”. That motto, which once introduced its Code of Conduct, was pushed down to the very end of the lengthy document in a version updated April 5.

Google's zigzagging over whether to pursue ties with the Pentagon has unfolded since then.

The company's former chief executive, Eric E. Schmidt, told a House panel April 17 that Google should move ahead on Project Maven even as it sorts out qualms and works to create a set of principles over how artificial intelligence can be deployed for defensive, and perhaps offensive, purposes.

Schmidt said the Pentagon “must ... create a foundation for similar projects to flourish”. Schmidt has clout both with Google parent Alphabet Inc, where he serves on the board, and as chair of the Defence Innovation Board, an advisory group to the secretary of defence.

The Pentagon began its outreach to high tech companies under former Defence Secretary Ash Carter, a theoretical physicist who set up a Pentagon outpost in Silicon Valley in 2015 to help the military speed up adoption of high-tech innovations. Current Defence Secretary Jim Mattis visited both Google and Amazon last August, and pledged to expand the experimental defence outpost in Mountain View, in the heart of Silicon Valley.

For its part, Amazon Web Services, a subsidiary of the Seattle-based e-commerce giant, runs a secret “cloud” for the CIA that allows the agency to share top secret information with other parts of the intelligence community. It won the US$600mil (RM2.38bil) contract in 2013.

An even bigger project is in the offing: Amazon Web Services is a frontrunner to build a massive secure cloud for the Defence Department that some analysts say could rise toward US$10bil (RM39.78bil) over coming years. Google, Microsoft and more traditional defence contractors like General Dynamics are also expected to bid for the information technology, or IT, project, which has the futuristic acronym JEDI.

“It's the world's largest IT procurement ever. ... You show me some other IT contract for US$10bil (RM39.78bil),” said John Weiler, managing director of a think tank on governmental technology purchases known as the IT Acquisition Advisory Council.

In contrast to Google, where hand-wringing over the direction of the company has spilled into public view, Amazon has not hidden its ambitions to lock up national security business, arriving in Washington with elbows swinging at traditional defence contractors.

“Amazon is saying, 'I'm taking you guys all on, and double middle fingers to you all',” Weiler said.

The chief executive of Amazon Web Services, Andy Jassy, told CNBC in early May that traditional contractors resented Big Tech companies for competing against them on the JEDI cloud contract.

“There has been a lot of noise from some of the older guard suppliers who are worried about losing some business, but our government deserves the best technology, the most capabilities, innovations, and best cost structure – especially at this time,” Jassy said.

Jassy's division is a rising star at Amazon, reporting US$5.4bil (RM21.48bil) revenue in the first quarter of 2018, a 49% increase year on year. Its high margins comprise a bulk of Amazon's overall profits.

Established contractors “are going to tell you that there is concern that (the JEDI cloud contract) is being wired for Amazon”, said David Myers, a specialist on information technologies at American Defence International, a Washington consulting firm for defence contractors.

Others say the idea of the Pentagon playing favourites is far-fetched.

“For those who would say the fix is in for Amazon, isn't that the same company that the president tweets about all the time?” asked retired Marine Maj. Gen. Arnold L. Punaro, who is a former chairman of the National Defence Industrial Association, a nonprofit that draws members from industry, military, government and academic spheres.

Indeed, President Donald Trump has repeatedly tweeted his hostility toward Amazon and its founder, Jeff Bezos, who personally owns the Washington Post. In early April, Trump in a series of tweets accused Amazon of taking advantage of the US Postal Service and of failing to pay a fair share of taxes.

Some older tech companies have done business with the Pentagon for decades, including Microsoft, which signed a US$927mil (RM3.68bil) contract in 2016, and IBM.

As news of the Google employee petition leaked to the media, another group calling itself the Tech Workers Coalition passed around another petition in Silicon Valley and the Seattle area.

“Google says its technology will only be used to 'non-offensive' ends. Our last few years working in the tech industry has issued reminder after painful reminder of the unintended outcomes of even benignly designed tech,” a spokesman for the group, identifying himself only as William, said in an e-mail.

But the drive has not resonated, gathering a scant 330 signatures at press time.

Amazon Web Services is moving into other corners of the national security arena. It has bought two startups spun out of the National Security Agency, the nation's secret monitoring and data-collection arm. In late 2016, Amazon bought a San Diego firm, harvest.ai, which uses artificial intelligence to detect threats from disgruntled insiders in companies or to spot intruders attempting to steal valuable data or customer information.

Two of the three founders of harvest.ai came out of the NSA.

Earlier this year, Amazon bought Sqrrl, a Boston-area threat intelligence company with the logo: “Target. Hunt. Disrupt.” Six of the company's seven founders came out of the NSA.

Separately, Amazon Web Services is marketing a powerful facial recognition tool, called Rekognition, that can identify up to 100 people in a crowd in near real time, and then analyse factors such as the openness of their eyes, the slant of their lips and emotions expressed in their cheeks to judge their sentiment.

“Amazon Rekognition can detect emotions like happy, sad, or surprised from facial images,” a company website says, and by analysing over time, the tool can begin “constructing a timeline of the emotions” of a subject.

Amazon Web Services has sought to keep a low profile for Rekognition, in some cases asking potential law enforcement clients to sign non-disclosure agreements, according to public records requests filed by the California office of the American Civil Liberties Union.

The Orlando Police Department began a pilot program with Rekognition in December, and testing continues, said Sgt. Eduardo J. Bernal. During the testing, he said, the department “is not using the technology in an investigative capacity or utilizing any images of members of the public”.

The Sheriff's Office of Washington County, Oregon, is also testing the platform.

To be sure, the tool can be used for less controversial purposes, such as identifying terrorist video content or images inappropriate for children. It can help authorities comb through video to find fugitives and locate missing people.

As Big Tech companies engage in more business in the national security arena, they may strike up alliances with old guard defence contractors, analysts said.

“Remember, coopetition is what they call it in the business here. Yesterday's competitor is today's teammate,” said Rossino, the Deltek analyst.

A retired Navy vice admiral who later served as a vice president of defence and intelligence at IBM, Kevin P. Green, said he expects major tech companies to understand the stakes when the defence establishment comes calling for help.

“The advanced technologies and the new capabilities that they could provide are absolutely essential to the national security of the United States,” Green said.

“I have high expectations that they'll make the right kinds of decisions, and I certainly hope that they will continue, as they have in the past, to support the national security missions of the United States and our allies,” he added. — McClatchy Washington Bureau/Tribune News Service 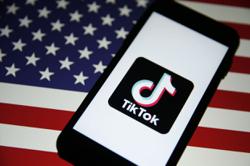 Opinion: Blocking TikTok opens a can of worms for Facebook, Google