This remote Chinese school has just three students, but with live streaming technology, they share a classroom with hundreds

Thanks to high bandwidth internet technology, the classrooms at Lumacha and other schools in the northwestern part of China are no longer quiet.

Ten years ago, the grounds at Lumacha primary school in remote Dingxi, a farming village in the mountainous region of China’s Gansu province, overflowed with 300 students during class breaks. Today the schoolyard is a lot quieter: there are just three students.

The plummeting student population is a consequence of China’s urban migration, with millions of rural residents having moved to big cities over the past decade in search of higher paid jobs – most taking their kids with them.

Now, thanks to high bandwidth internet technology, the classrooms at Lumacha and other schools in the northwestern part of China are no longer quiet – except that the chatter is coming across a live streaming network that connects hundreds of students spread across a vast area of China’s country side.

As part of Chinese president Xi Jinping’s goal to eradicate poverty across the nation by 2020, the central government has funded initiatives aimed at narrowing the gap between the quality of education in rural and urban areas. In February Beijing authorities announced they would boost internet speeds in rural schools so they are on par with major cities within two years, with China Unicom, the country’s second-largest mobile network operator, providing 100 Mbps cable service to provincial schools.

Technology development has also been a priority for the central government, with the goal of improving the country’s living standards. At the Two Sessions meetings this week Chinese premier Li Keqiang called for the strengthening of China’s basic research capabilities, including the launching of a number of science and technology innovation programmes, building national laboratories and encouraging corporations to spearhead similar innovation. 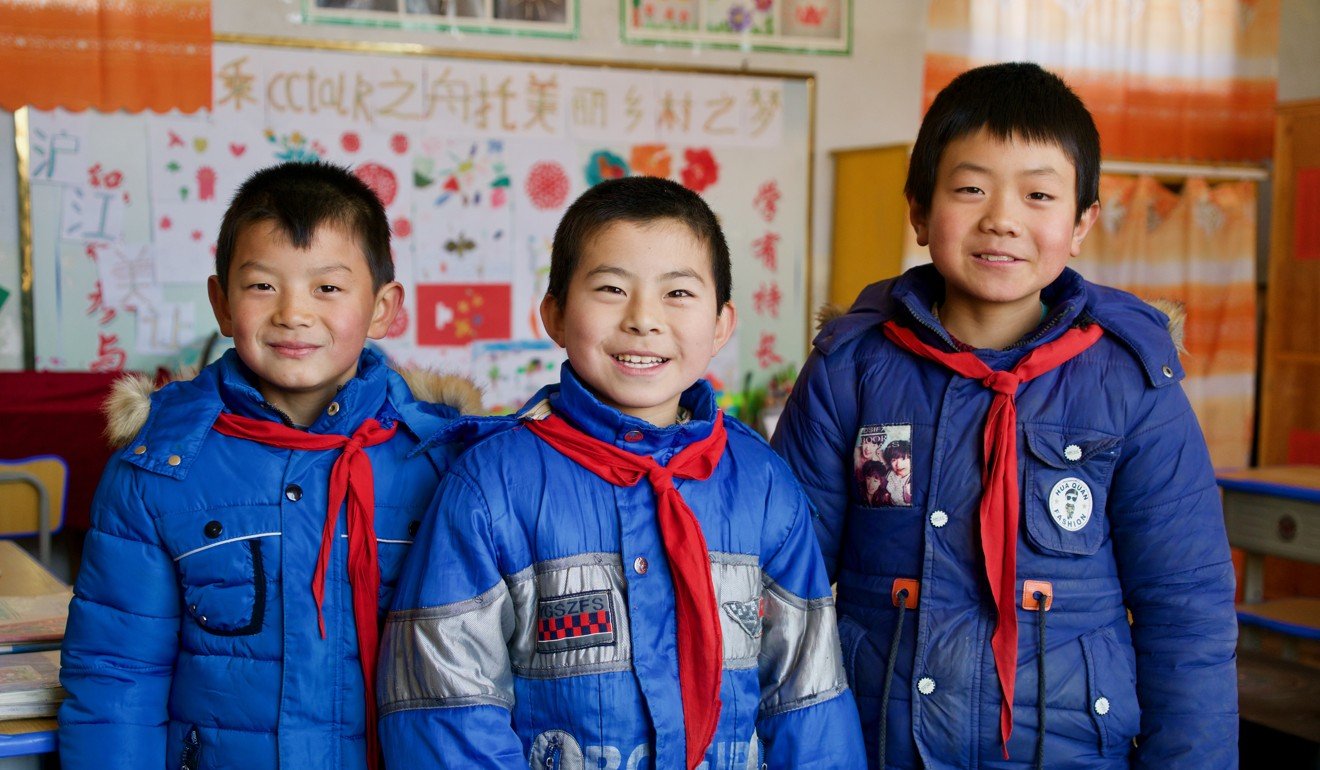 "Rural children are not any less bright than urban students. What they lack is knowledge of the world,” said Wu Hong, chief education officer at Hujiang EdTech, the educational technology company behind the initiative. “Internet and live-streaming gives them access to experiences that they would never have had before.”

The furnishings in the main classroom at Lumacha are sparse – six wooden desks sit in the middle of the room, and several long, cloth-covered tables along the walls display the students’ arts and crafts. During the winter, temperatures dip below minus 10 degrees Celsius, and the classrooms get so cold that it is necessary to wear thick outerwear, even indoors. Natural sunlight streaming in through the windows each day is crucial because there is no lighting in the classroom.

But the school’s simple furnishings belie the fact that Lumacha’s classroom is equipped with high-speed wireless internet, a large smart touch screen display and a webcam, secured to the wall with tape, as part of the Chinese government’s push to provide better connectivity to rural schools.

Every day, 10-year-old Chang Wenxuan and his two classmates, walk almost an hour across a canyon to get to school.

Once in the classroom they eagerly turn on the touch screen display, which is connected to a nearby computer that runs on the Windows 7 operating system. One of them will expertly navigate the cursor on the screen and log in to an educational platform titled CCTalk, Hujiang’s interactive online learning platform, where the three students take part in live-streamed classes daily, raising their hands to answer questions asked by the remote teachers. 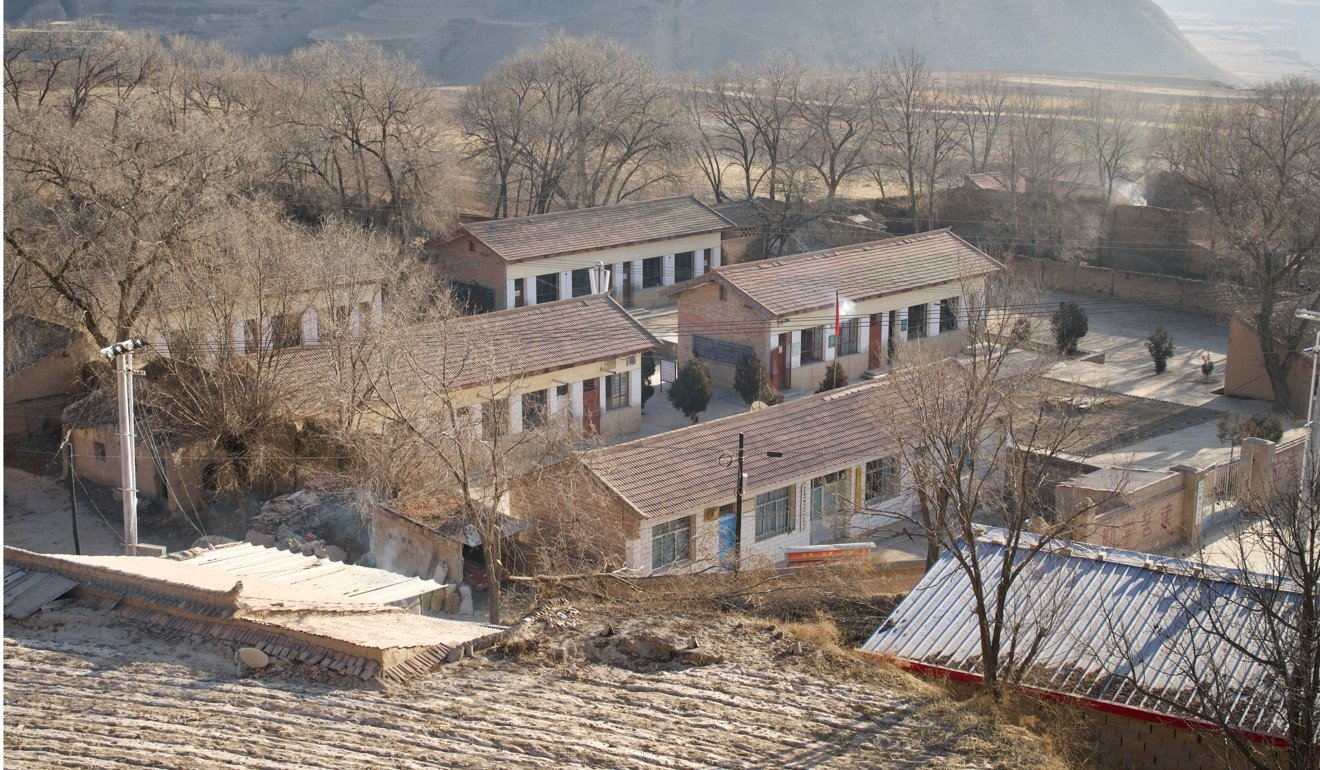 Depending on the day’s schedule, live-streamed classes for the students could include anything from arts, crafts and music to lessons on mental health or personal safety, all taught by teachers from neighbouring schools. It is during these online lessons that the three students get a glimpse of the world beyond their village, interacting with students from other schools.

Lumacha primary school is one of 28 schools in four educational zones which are part of a “Sunshine Classroom” initiative run by Shanghai-based Hujiang EdTech. The initiative is part of Hujiang’s corporate social responsibility programme Hu+. Established in February last year, Sunshine Classroom brings together schools from four educational zones in Dingxi, allowing teachers to share resources by live-streaming lessons to other schools.

Before the Sunshine Classroom initiative, the three Lumacha students had never attended any arts and crafts or music classes, according to school principal Feng, who has been teaching at the school for over a decade.

“None of the teachers here, including myself, have any knowledge of music or art. We would use the time to go over core subjects like mathematics or language instead,” said Feng.

Shao Jintang, head principal of the Lijiabu educational zone, which comprises 14 schools including Lumacha primary, was the key official responsible for getting schools in the nearby zones to sign on to the Sunshine Classroom initiative.

“In [Gansu] we don’t lack teachers, what we lack are resources and teachers who are skilled in specific subjects, like art or music,” Shao said.

Some of Hujiang’s own teachers also participate in the initiative, giving classes to students via live-streaming although they are based in urban cities.

“The quality of education in the countryside is not as advanced as in the cities … many [rural] teachers will leave for jobs in the cities when they’ve gained enough experience. Now, we use technology and online classes to have good teachers who are in the cities teach our students,” Shao said, adding that this will help narrow the country’s gap between rural and urban education.

At Lumacha primary, Feng also teaches English to the three boys, though he admits his understanding of the language is limited.

“I specialise in teaching Mandarin, but because there isn’t anyone to teach English here any more, I have no choice but to try my best,” Feng said.

Among the 14 schools in the Lijiabu education zone, there are just three music teachers compared to 611 primary school students.

“Before we started streaming classes online I would often travel to nearby schools to teach the students there,” said He Lijuan, who teaches music at Zhangwan Central School in the town of Lijiabu. “For some schools that were too far to reach, and did not have music teachers, the students never had such lessons.”

Now, He specialises in teaching music to Primary 5 and 6 students, but instead of having around 10 students at a time, her classes are broadcast to more than 100 students across the 28 schools.

“It was difficult at first as many of them had no sense of rhythm or tone. If I managed to teach them how to sing just two lines of one song, that was already a big accomplishment,” she said. “They’re so much more confident now.”

But the benefits for students in such rural schools are more than just learning about the arts. According to Feng, taking part in live-streaming classes has boosted their confidence in public speaking, and has even improved their spoken Mandarin.

“My three students would often speak in their local dialect, even at school, but because the live-streaming classes are all conducted in standard Mandarin, their spoken language has really improved,” said Feng. “They look forward to every live-streaming class and are always eager to answer the teacher’s questions. The three of them aren’t lonely at all.”

When Chang is asked if he would like more classmates, he shakes his head, grinning from ear to ear.

“No, because then we each have more toys to play with,” he cheekily replied, adding that he has made many friends from the live streaming classes. 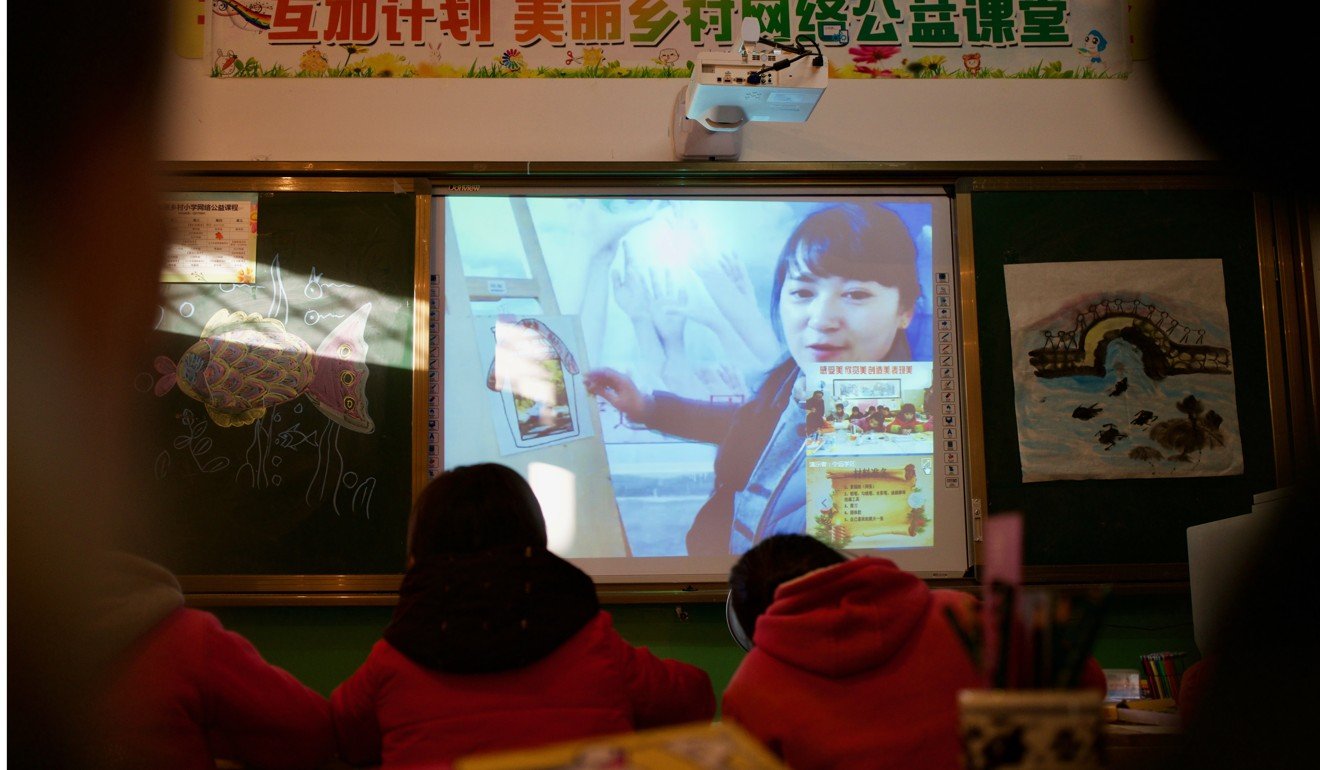 Wu at Hujiang Edtech believes that the biggest advantage of using the internet to live-stream classes to rural students is that it gives them a peek into the world beyond their village, and even to countries outside China.

In May, Sunshine Classroom organised a live-streamed virtual tour in cooperation with the Frederiksborg Castle Museum in Denmark, where students had a chance to interact with museum curator Mette Skouggard.

Live-streaming is just one of the many ways technology is helping to transform education in China’s impoverished rural areas.

Shenzhen-based start-up Pujiang Technology is another company working to help rural and lower-income students improve their studies. The company works with smaller schools in cities like Chengdu, Nanjing, and Zhuhai, which often enrol “left-behind” children whose parents have moved to bigger cities and urban areas in search for better-paying jobs, but leave the kids behind in the care of relatives.

Pujiang Technology developed an app called Zhiyu Education, which allows schools to digitise students’ examination scores and academic evaluations. The app also allows parents to record and send video messages to their children, who can then watch them on their teacher’s smartphone.

“The Zhiyu app has helped build a bridge between the school and parents, even if physical distance separates them, allowing parents to better understand how their children are performing academically,” said Chen Jianqiang, headmaster at Yingcheng middle school in the mountainous regions of Yingde, Guangdong province.

Zhiyu Education is already used in Sanya, a city on southern Hainan Island, after the company signed an agreement with the local education bureau to connect all 100 schools to the app, according to Pujiang’s 29-year-old founder Zeng Zhao. Nationwide, the company is working with almost 500 schools and 300,000 students.

Back at Lumacha primary, student Chang has already decided what job he wants when he finishes school. “I want to be an astronaut, because then I can fly through the skies and explore space!” — South China Morning Post