Even a paper map is still handy – while in Pos Titom, Pahang, Adil (right) and community members use it to identify topographical features. — Adil Othman

The popularity of Waze and Google Maps may have made GPS devices less relevant but fans continue to find a use for it.

Malaysia’s online mapping communities – Malsingmaps and MySgFreeMaps (MFM) – were once the envy of the world but have now shrunk since the advent of navigation apps like Waze and Google Maps.

Malsingmaps and MFM were established in 2001 and 2008, respectively, before ­smartphones and navigation apps were widely available.

Community members – consisting of ­dedicated GPS mapping enthusiasts – would drive on each and every street in a ­particular area to ensure that the maps were accurate before rolling out updates to the ­public for free.

The crowd-sourced maps were of such high quality that the two communities signed an agreement with international GPS device companies, including Garmin and PapaGo, to allow their maps to be used on their devices.

However, as Malaysia grew to become one of the countries with the most active Waze users in Asia, GPS devices have been ­relegated into a niche item used mostly by adventurers who go hiking, mountain biking and off-roading.

Malsingmaps founder Adil Othman, 47, said that the community’s member activity slowed down as the sale of GPS devices dwindled – even Garmin Asia Pacific had to shift its focus from personal navigation devices to fitness trackers.

“In the past there were lots of ad-hoc ­contributors who used to send us updates whenever they drove into an unmapped area, but that rarely happens these days,” he said. He estimates that the user base has reduced by 75% since its heyday.

Since people have access to free maps on Waze and Google Maps, the members have turned into passive users who only ­download the maps when needed.

“Back then we could take pride that our community was emulated by a lot of other countries and we were one of the first (online mapping communities) to be that organised,” said Adil, a lawyer by profession. MFM co-founder Anthony Yong, who has since left the community, said a majority of the members have retired their GPS devices and only use navigation apps on their phones for their daily commute.

“If I want to use a GPS device, I have to make sure the maps are updated,” said Yong. Google Maps and Waze, on the other hand, automatically download the latest maps.

Once an active mapper, Yong stopped mapping in 2010 as the hobby became too time consuming. He said navigation apps saved him from carrying an additional device and with Google Maps providing an offline map option, he doesn’t have to worry about his phone running out of data.

For Adil and his friends in the community, the convenience of navigation apps have made them less reliant on GPS devices.

“Using GPS devices requires a lot of work from users like downloading the maps from the Internet and uploading it into their device.

“With the age of the smartphone, you don’t need to do all of that, there is no hassle of cables and learning how to load maps,” he said, adding that the live traffic information is also very useful.

Yong cited another reason for the declining use of GPS devices. He said the community was very active when it first started as they were building the map from zero but now that most of the areas have been mapped, there is “not much value” left for contributors.

“The mapping community has been around for 10 years, what is needed to be mapped has already been done. Now they are mostly maintaining the maps and reporting the occasional new point of interest or route as they change all the time,” he said.

GPS devices still have an edge over navigation apps as the mapping community members enjoy venturing off the beaten path to map places that have yet to be recorded.

According to Adil, the maps of outskirt areas remain incomplete on Waze because the technology requires cellular coverage before an area can be mapped.

“That is the only drawback that I can see. If you want to go to an orang asli village in a jungle, you can’t drive there and map using Waze,” said Adil, who still spends six to 10 hours a week mapping.

“If you want to go to areas that are more remote such as jungle trails with no cellular ­coverage, you would still need to use our maps. This is the niche we have unfortunately fallen into,” he said.

So a small group of hardcore mapping enthusiasts like Ong and Adil still continue mapping, keeping the community alive, albeit on a smaller scale.

Ong still prefers to use a GPS device for his daily commute. — ONG CHEE CHUNG

“These users drive around and turn on the recording feature on their device to collect data, track log and points of interests, and then they send it to us to integrate it into the map and release an update,” Ong said.

“With the demand for GPS devices reducing, why do they still continue mapping?

“It is ultimately made by Malaysians for Malaysians,” he said.

Although both founders foresee a possibility of GPS devices becoming obsolete, they are confident that the mapping community will go on for a long time to come.

“I don’t think our community will die so soon... I’m not worried at all, even though the users are getting less, we still enjoy doing the mapping,” Ong said.

Adil said Malsingmaps is even toying with the idea of using its database to build a curated map app that provides food and activity recommendations.

“I think the community will continue to go on but on a much smaller scale. We are ­trying to find ways to make it useful again to users,” he said.

Adil and Ong emphasised that this is a hobby fuelled by the passion of discovery, and one that they are not ready to give up even if no one uses their maps.

“Are we upset that Waze has affected our user base? No. Mapping is not just about finding a particular area, it’s also about taking note of all the places that surround it.

“And for so long as the fire remains in our belly, we will keep going,” said Adil. 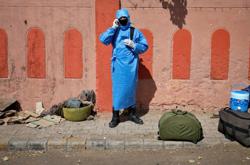