Ride with Robi the robot

Robi sitting on his charging base. It’s too bad that the design of the base is such that Robi cannot set himself down to charge.

This robot walks, talks and listens to you

Judging from the number of people that gathered around our desk when we started Robi the robot up, everyone seems to have a fascination with automatons, especially those that can speak or sing.

In fact, Robi does more than that – it recognises commands and can ­perform a number of tricks, like doing push-ups and answering questions in a variety of languages.

However, while a robot that does all this is nothing new, the Robi is a little unusual in that you actually build it from parts that come bundled with a weekly magazine.

Yes, that’s right – Robi is an interactive robot that you can build yourself.

As far as we can remember, Robi is the most advanced product that we’ve seen sold as a part-by-part kit in ­magazines.

The kit comes in parts spread over 70 magazine issues, with detailed assembly instructions.

Robi can speak, sing, dance and do pushups when asked to do so.

The first issue is RM24.90 but depending on the part you get in each issue, some issues (such as the one with the CPU or the speech recognition circuit board) can cost you RM137.

However, those prices are not the norm and most issues of the magazine will cost you RM74.90 each.

Subscription prices will be lower, however – there’s a 10% discount off each issue when you subscribe.

The magazine is released weekly, which means that it’s going to take well over a year to complete building the robot – that’s quite a long time to wait to get the complete robot.

We got our prototype Robi already pre-assembled so we didn’t have the opportunity to experience the fun of putting the robot together.

However, we did get to test the product quite a bit in the week or so that we had Robi to try out.

Aesthetically, Robi is a pretty cute robot – some people we showed it to have observed that it looks vaguely like Osamu Tezuka’s Astro Boy.

The robot does feel hefty and pretty high-quality in the hand.

Our only concern is the docking base for the Robot – we’re not sure if it’s our prototype sample, but it does take a bit of force to dock Robi into its base to charge.

The base looks like a tiny stool which Robi sits on, but strangely enough because of the design of the power connector, the robot can’t go back and sit down to charge itself.

Robi’s scarf houses the power switch and also doubles as a handle for carrying the robot around.

The power switch is located on Robi’s scarf, which also serves as a carrying handle – the instructions recommend that you carry the robot either using this carrying handle or hold it around the waist to ensure that you don’t damage the ­servomotors.

Once you turn it on, the eyes will flash to tell you that Robi is ready to go.

Robi has microphones and voice recognition technology and it responds to certain phrases like “What’s your name?”, “Robi come here” and “Introduce yourself.”

This isn’t Apple’s Siri or Google Assistant however – not only are you limited to specific phrases, you also have to speak slowly, fairly loudly and clearly to get Robi to respond.

We tried it a few times and at first Robi wouldn’t respond until we increased the volume of our voice and spoke clearly.

Robi is supposed to respond to over 250 phrases, but the prototype model we got responded to only about 20 or 30 phrases.

The localisation also includes some Malaysian English phrases, so Robi can respond to “What’s your name?” with “Just call me Robi lah!”

Battery life is not particularly long – if you ask Robi to do push-ups or dance a lot, you’re looking at perhaps about 15 to 20 minutes of battery life at most before Robi will tell you that he needs to be charged again.

Oh yes, one thing that Robi can also do is that it can be used as an infrared remote control for your TV, although we couldn’t test this function since we had no way of setting the built-up robot to learn the infrared signals from our brand of TV.

From what we’ve gathered, though, you set the robot to “learn” the ­infrared signal of your particular TV brand during the assembly process – Robi simply captures the TV remote’s ON/OFF signal when the robot’s ­infrared circuit board is put into ­learning mode.

Whether you think Robi is a great product or not depends on your expectations – if you think you’re getting a personal assistant or pet that will follow you around and carry stuff for you then you’re going to be disappointed.

However, as a project to put together with your kids which will ultimately get you a walking, talking, dancing robot, then Robi is really fun – I know that if I were a kid, I’d have been ecstatic to build such a thing.

However, do be aware that although spread across 70 issues, you’re ­ultimately paying about RM5,300 if you buy it at the local newsstand, or almost RM5,000 if you subscribe.

Pros: Surprisingly sophisticated for a kit robot.
Cons: Battery life is relatively short; Robi only responds well if you speak clearly and slowly. 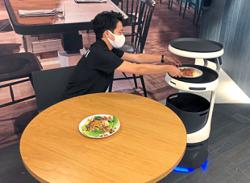