Biosensor chip under your skin to monitor health 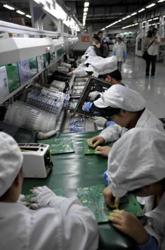 MINUTE: The chip is capable of simultaneously monitoring, in real time, several health parameters such as temperature, blood sugar levels and cholesterol.

Researchers presented this week a biosensor chip installed beneath the skin that monitors health and medicine dosage all the while communicating the data to a smartphone.

Several laboratories from the Swiss Federal Institute of Technology in Lausanne (EPFL) have been working on a new biosensor chip that makes continuous monitoring and analysis over long periods of time possible.

Their project was presented on May 26 at the International Symposium on Circuits and Systems (ISCAS) in Lisbon, Portugal.

This 1cm sq device contains three main components: a circuit with six sensors, a control unit that analyses incoming signals, and a radio transmission module. Implanted under the skin, it has an induction coil that draws power from an external battery attached to the skin by a patch and can also communicate with a smartphone.

"A simple plaster holds together the battery, the coil and a Bluetooth module used to send the results immediately to a mobile phone," said Dr Sandro Carrara, a researcher from the Integrated Systems Laboratory (LSI) at the EPFL.

The chip is capable of simultaneously monitoring, in real time, several health parameters such as temperature, blood sugar levels and cholesterol. "This is the world's first chip capable of measuring not just pH and temperature, but also metabolism-related molecules like glucose, lactate and cholesterol, as well as drugs," said Dr Carrara, and it can do so for several days or even weeks.

A definite breakthrough for patients taking long-term treatments, this invention will allow for the real-time monitoring of the effects of medicine on metabolism. It will then be easier to adjust the dosage for specific patients. According to a release by the EPFL, until now, the blood work that medical staff rely on was generally a snapshot indicative of the moment the blood is drawn before it undergoes hours -- or even days -- of analysis.

The biosensor chip has already been tested on mice to continuously monitor glucose and paracetamol levels without a wire tracker getting in the way of the animals' daily activities. Human testing should begin within the next three to five years.

"Knowing the precise and real-time effect of drugs on the metabolism is one of the keys to the type of personalised, precision medicine that we are striving for," concluded Dr. Carrara. — AFP Relaxnews