By CHONG JINN XIUNG
This is the year of wearable technology and it’s not hard to see why. More than ever people are starting to use wearable devices such as smartwatches and fitness bands.

Tech giants around the world are stepping up efforts to introduce wearables. Google itself is ­working on its Glass smart eyewear and Android smartwatch and even Apple is rumoured to be working on “iWatch” although we will only know for sure on Sept 9 when it holds its annual event.

As people become more health conscious, there is a huge potential for wearables to make an impact. It’s expected to become a big contender for your wallet over the next three to four years.

The company expects the wearable market to grow to an estimated US$1bil (RM3.19bil) by 2016.

Entrepreneurs here have been quick to jump on the bandwagon to meet the demand for wearable tech and are going beyond just activity tracking.

The WaryBee, which measures 29mm in diameter and 8.5mm thick, has a panic button that a user can press when in an emergency. 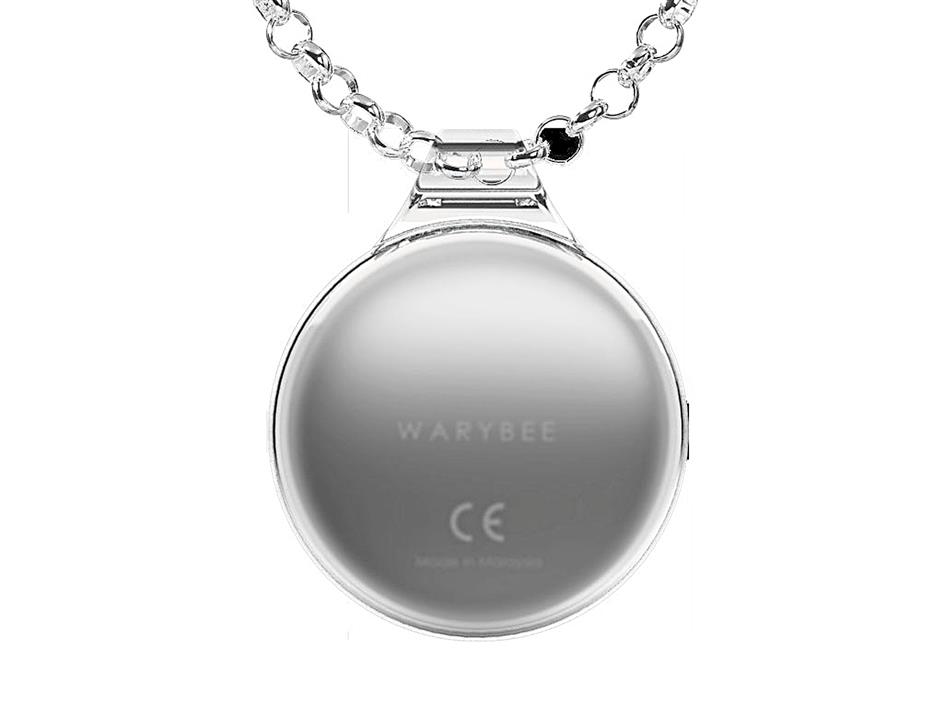 The WaryBee can be hidden in a necklace

“We have plans to integrate the device into fashionable jewellery for ladies. It will not only look good but will also keep them safe,” said Teng.

“All a victim needs to do is press the button and an alert message along with the approximate GPS position will be sent from his or her phone to the person’s emergency contacts via the WaryBee app.”

The device uses Bluetooth to communicate with a smartphone (both iOS or Android) and has an effective operating range of up to 35m. Even if the phone was taken away from the victim, the WaryBee will still work as long as the phone is not switched off.

“Your smartphone is the first item that will be taken away by an attacker,” said Teng. “Even if it’s not taken away, you won’t really have the time to unlock your phone and call for help.”

WaryBee will also send out an alert to other users of the app within a 30m radius, so that they know a crime is in progress in their vicinity.

“Everyone will be able to watch out for one another in case of any emergency,” said Teng.

He also hopes to share the data with the police department in the hope that it can make use of it to map out criminal activity in a ­particular area.

WaryBee is expected to go on sale in February. The price has yet to be finalised but Teng expects it to cost between RM147 to RM198.

Wearables can also help save lives. Geoffrey Tan started working on a band to help his father who suffers from frequent hypoglycemia attacks at night.

“It really hit home when my parent’s diabetic neighbour who was living alone, passed away due to untreated hypoglycemia. It ­hardened my resolve to find a way to help my father and other diabetic patients,” said Tan.

Hypoglycemia, a common ­problem in people with diabetes, occurs when a person’s blood sugar drops to abnormally low levels. If left untreated, it can lead to seizure, coma or death.

Tan formed Geob International Sdn Bhd to work on Hypoband, which is designed to be worn on the wrist to detect the wearer’s skin temperature and humidity. 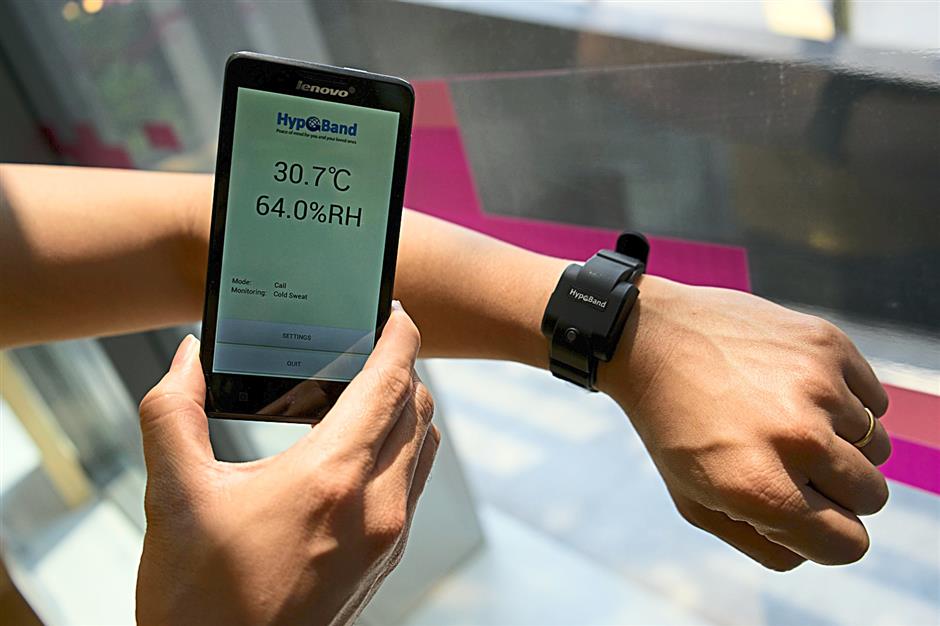 The Hyboband is designed to detect hypoglycemia attacks.

As soon as it detects cold sweat, a common symptom of ­hypoglycemia, it will sound an alarm and trigger a companion app on the user’s phone to send out an alert.

The app, which runs on both iOS and Android smartphones, also includes the location of the wearer on Google Maps.

The Hypoband can also double up as a panic button which is especially handy for the elderly should they experience a fall or injury.

He is hoping to expand the Hypoband’s capabilities to allow doctors to remotely monitor a patient’s condition, as they can warn patients even before they experience a hypoglycemia attack.

The Hypoband goes for RM480 and Tan is currently in talks with telcos to bundle it with a ­smartphone as part of a package for senior citizens.

The use of wearable tech in sports is not new but local startup Sportboleh is hoping to take it to another level.

Founded by Joseph Dolcetti, a former consultant for the National Sports Institute of Malaysia, the company wanted want to address a common complaint among athletes — that the gym equipment doesn’t prepare them for real performance on the field or court.

This gave birth to the Exogen suit which consists of a pair of shorts, adjustable forearm and leg sleeves, and a top that is made of a combination of several cooling layers that dissipate heat and wicks away sweat.

Also, the surface of the suit is made of a velcro-like material so that weights can be attached to various parts of the body.

“Exogen is a light suit that does what equipment at the gym can’t do and that is to allow athletes to perform their activities at high speeds,” said Patrick Potvin, head of research at Sportboleh.

Potvin said the beauty of Exogen is that it can be applied across almost any kind of sports be it ­badminton, squash, swimming, cycling, ice hockey or golf. 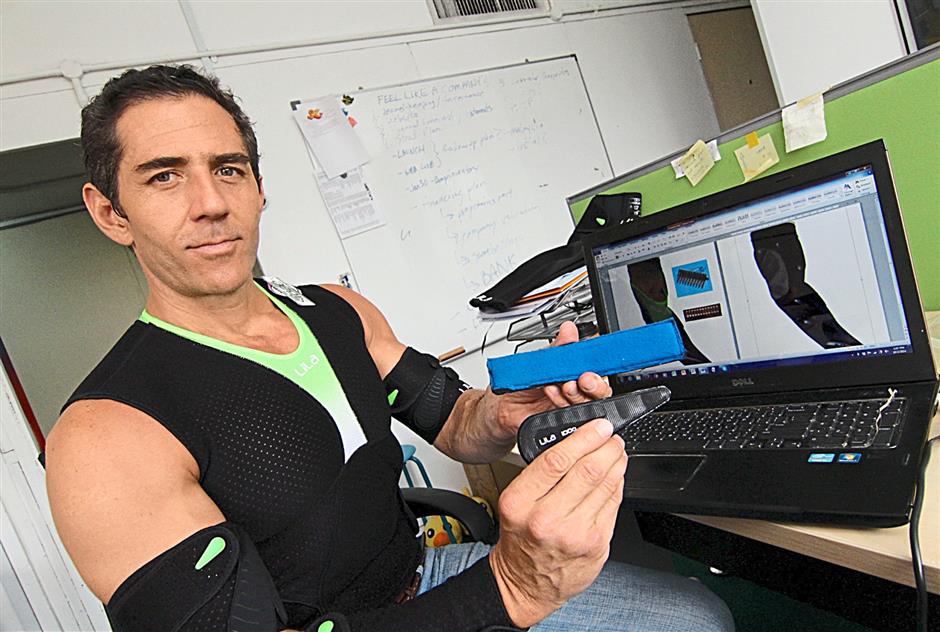 Versatility is the Exogen's strong suit. It can be used for just about any sport.
The company claims the suit can improve an athlete’s performance by up to 17% in speed and power, and calories burnt by 12%.

“When you overload the body with resistance, you are forcing it to adapt to improve,” he said.

The Exogen has been adopted by notable athletes such as national shuttler Datuk Lee Chong Wei and squash queen Datuk Nicol David.

However, the use of Exogen is not limited to professional athletes, as it can also help casual sportsmen who want to improve their game.

“If you want to, say, improve your golf swing, you only need to wear the forearm sleeve and not the whole suit. Add some weights to provide resistance and you are good to go,” said Potvin.

The next stage of development will involve ­creating a ­biometric system called Exotek which ­incorporates ­biosensor ­technology like a heart rate ­monitor, inertial sensor and ­accelerometer to measure ­performance.

“There are three main metrics that we use to measure an athlete’s performance, namely their heart rate, calories burnt, and power and speed,” said Dolcetti.

The Exotek system will be sold as an optional accessory for those who want a detailed breakdown of their workout performance.

“We also hope to develop a ­companion mobile app for Exotek that connects to iOS or Android smartphone, as it can function as a virtual personal trainer that provides real-time feedback,” said Dolcetti.

Sportboleh expects to complete work on Exotek by next year with beta trials scheduled for the second and fourth quarter of 2015.

No power, no ­problem

Malaysia is also making advances in the field of ­alternative power sources for wearable technology.

Although wearable devices are small in size, almost all of them need power to function and most rely on ­conventional batteries. The ­problem with such ­batteries is that they have a short finite lifespan and contain harmful chemicals.

Associate professor Dr Mohd Haris of Universiti Teknologi Petronas (UTP) and his team have been working on an alternate energy source for a tyre pressure monitoring system (TPMS), which can be used to power wearables.

TPMS, which also measures ­temperature, is expected to improve the safety of vehicles. However, the harsh and hot ­environment isn’t suitable for ­conventional batteries.

The team at UTP have created an electret-based energy harvester that supplies power to run a TPMS system for more than 10 years without needing a recharge or replacement.

According to Dr Mohd Haris, the same method can also be applied to wearable devices or even ­pacemakers for the heart, as it can use a person’s body heat to ­generate power.

“In the not too distant future, we may even see our mobile phones relying on hybrid power ­generators that use different energy sources such as thermal, electrostatic, solar or motion,” he said.

“We would be able to keep our smartphones and wearable devices running in any situation.”

Despite the many benefits ­wearable devices bring to users, it may take some time before they gain mainstream acceptance.

The average user will still be focused on smartphones in the next five years and wearables will be more of an add-on device, according to Anshul Gupta, principal research analyst at Gartner.

However, it’s just a matter of time, as wearables hold a lot of promise for the future.