Samsung TabS into the future

Members of the international media looking at the new Tab S in Madison Square Garden. (Official Samsung shots) *BYTZ USE ONLY*

Unveiled at New York’s Madison Square Garden, the Galaxy Tab S was certainly a looker with a mere 6.6mm thickness and an ultra-thin bezel. Available in two sizes — 10.5in and 8.4in — the screen alone should turn heads with its WQXGA Super Amoled (active matrix light emitting diode) display, similar to that found in the company’s TV range.

Ready for its close up

Samsung claims this is a world first in tablets as its Super Amoled display can deliver more than 90% of Adobe RGB colour space, promising users a wider colour range, deeper contrasts, as well as better pixel quality on top of pixel quantity.

Indeed, the electronics giant seems to have gone to great lengths to make the screen one of its standout features — the company claims it will detect ambient light and temperature of the viewing environment and automatically adjust gamma, saturation and sharpness to reduce strain on the eyes, as well as improve outdoor visibility even in direct sunlight. 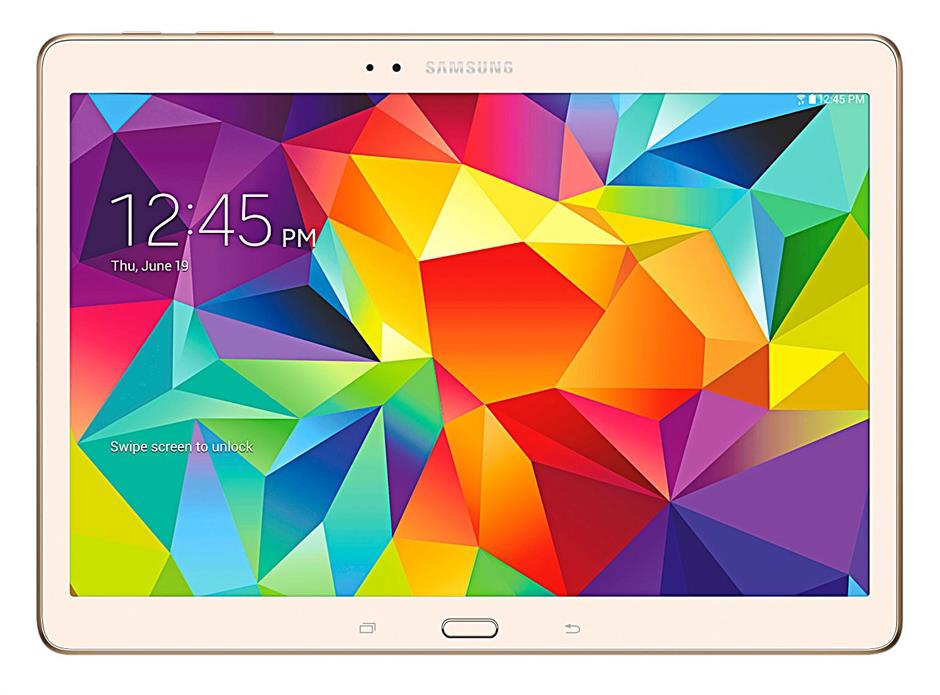 SHARP: The screen alone should turn heads with its WQXGA Super Amoled display.

The attention to display quality seems to have sealed the deal on a number of strategic collaborations with bigwig content providers such as Conde Nast, National Geographic and even comic book titan Marvel, all of whom had reps present at the big unveiling parroting the same line — that they were thrilled their beautiful, award winning photos could now be showcased on a device that could do them justice.

Users can expect to view such iconic magazines as Conde Nast’s Vogue, GQ and Vanity Fair in Samsung’s Tab S-exclusive subscription-only Papergarden app, an optimised viewing environment for interactive digital magazines. At the demo, the company showed off a video of a golfer teeing off right on the pages of a magazine, instead of the usual static photos or photo galleries. 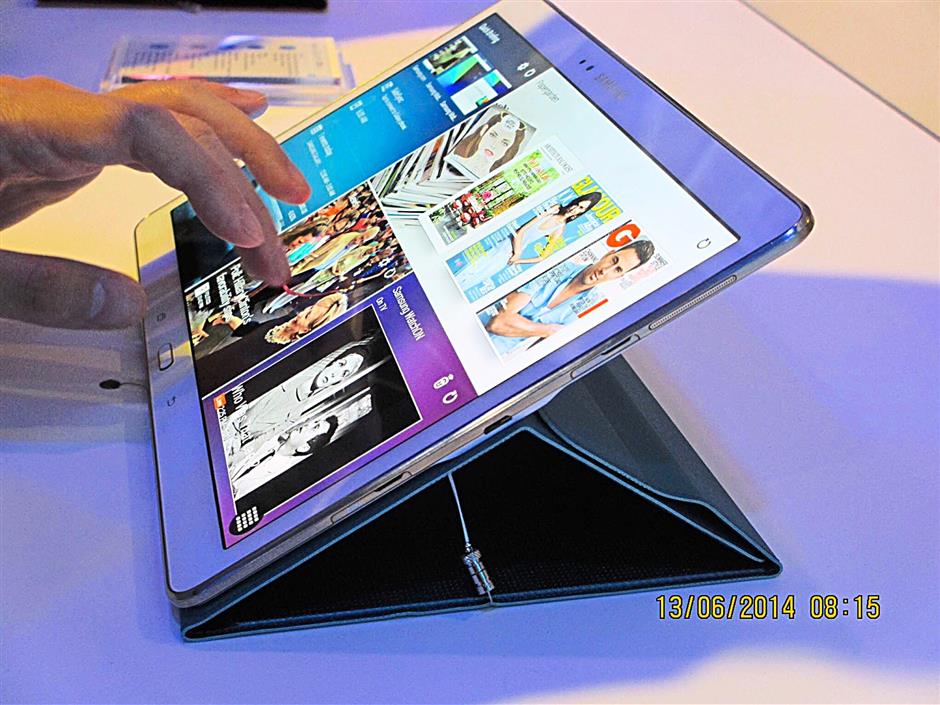 GLAM: Galaxy Tab S users will be able to access such iconic magazines as GQ and Vogue via the Tab S-exclusive subscription-only app, Papergarden.

Tab S users can also look forward to three months of unlimited free membership to the Marvel Unlimited app, with access to over 15,000 comics.

There was also much hype about the Avengers: Age of Ultron collaboration with Samsung — beyond product placement in the upcoming Avengers movie, there will be custom Marvel-branded Samsung products, with Samsung users getting early sneak peeks at Marvel movies debuting in 2015 (starting with Age of Ultron) and Marvel One-Shots over the next year, plus other exclusive content.

If the multimedia features have you worried about battery drain, fret not — Samsung claims the battery is good for 11+ hours of video playback at 1080p, which is about half a season of regular US TV shows or the entire Lord of The Rings trilogy at one go, all on a single battery charge.

Not all play and no work

Samsung seems set on carving out a niche in the fast-growing productivity market segment with connectivity features such as SideSync 3.0 which includes a briefing widget, as well as call forwarding and file transfer functions.

Galaxy S5 users in particular will be thrilled to know that SideSync 3.0 now allows you to mirror the tablet on your phone as well — instead of just the phone to the tablet as with previous versions — which means you can transfer files from one device to the other without the need for a data cable. 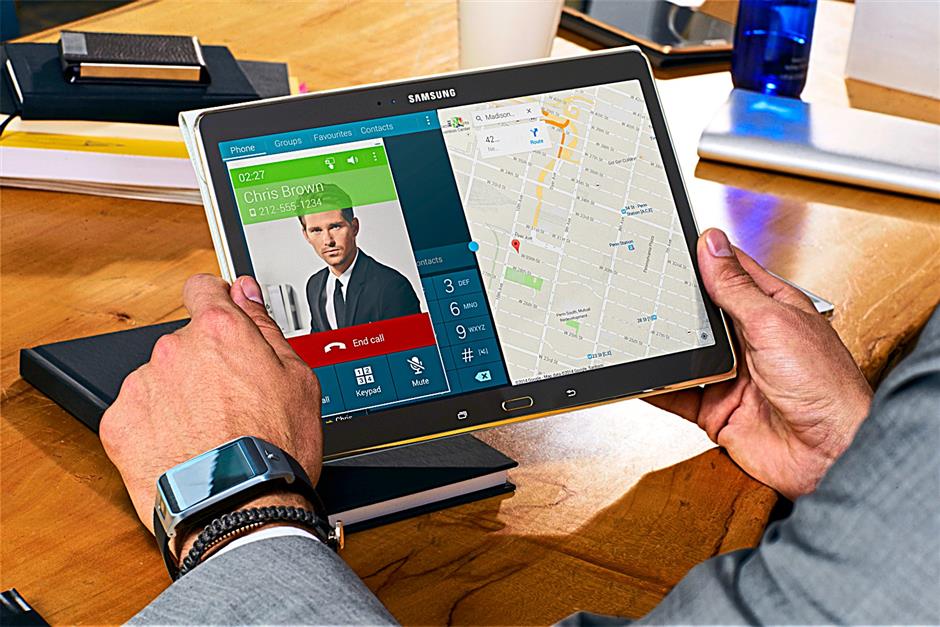 ANSWER THAT CALL: Mirror your Galaxy S5 on to your Tab S with SideSync 3.0 and take calls on the tablet with the Call Forwarding feature, even if your S5 is in another room.

You will also be able to drag and drop images or text from your phone into e-mail messages being written on the tablet, and take voice calls via the call forwarding function from the S5 on the Tab S, even if the S5 is in a different room.

However, those using other Samsung devices will have to wait until the latest update is rolled out.

The briefing widget allows users to see at a glance what else is happening on other apps on the Tab S without having to switch out of one app to the other.

Other features include a Remote PC function, which connects the tablet to your home PC while on the go, and QuickConnect, which detects all devices in the vicinity — be it a PC, keyboard, mobile or tablet — and takes all the guesswork out of how best to connect those devices to your Tab S.

This means that all devices within range (not just Samsung devices) which are WiFi-, Bluetooth-, NFC- or WiFi Direct-enabled will be automatically detected for easier collaborative work. 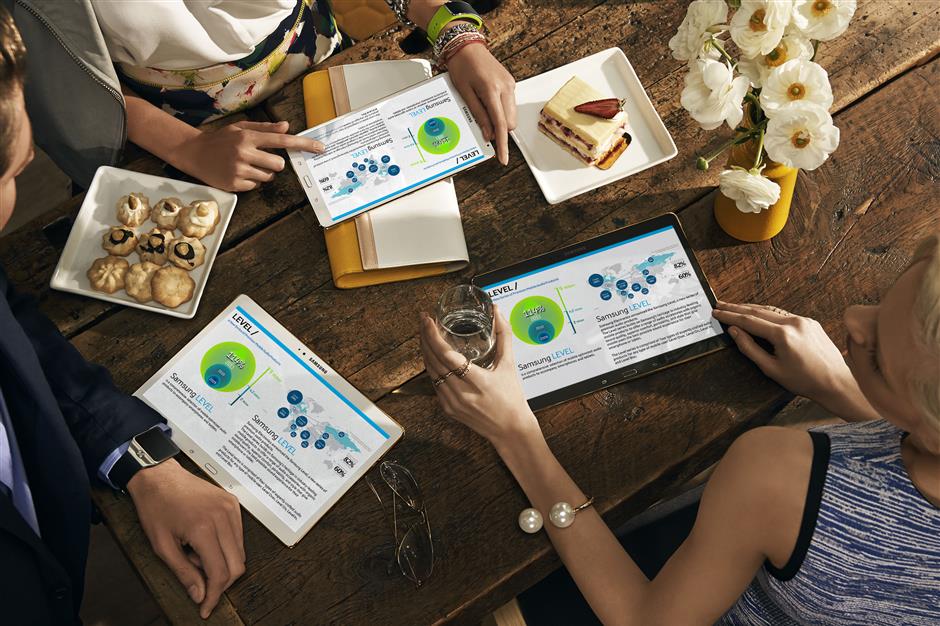 Last but not least, Samsung has also upped the security features on the Tab S by making it its first tablet to boast a fingerprint scanner.

Best of all, fingerprint scans can be enabled for not just one but up to eight users with its Multi-User mode, making it ideal for families who share a tablet. Multi User mode also allows each individual user to customise and save their own homescreen and apps.

There is also a specially designed Kids’ Mode with its own dedicated interface and kid-friendly applications — a boon for parents who worry about what their kids may get up to on the Web.

Launch dates and prices for Malaysia will be announced at the local launch tomorrow.