There's an app for that

Your smartphone is only as powerful as the apps you install on it. If you are a proud owner of a new Android ­smartphone or iPhone, it can be quite daunting to sift through the online marketplace for the right apps.

This is because Google’s Play for Android and Apple’s App Store for iOS devices offer tons of apps for just about everything. And if you are not careful, you can even get infected with malware if you download the wrong app from the Play store for your Android smartphone. This is not the case for the App Store as it’s closely monitored by Apple.

To get you started we have picked the best apps in five categories — browser, camera, photo editing, music streaming and Cloud storage. Without further ado, here they are.

Among the first apps Android users tend to download for their new devices other than Facebook are web browsers. While iPhone users are happy to stick with the default Safari app, Android users have a ­tendency to go for third-party alternatives such as Chrome and Firefox, as they offer numerous handy features.

There are plenty of choices for both ­platforms but the ones that are the most powerful are Dolphin Browser, Javelin, Chrome and Firefox.

Dolphin Browser (Android, iPhone) is one of the best mobile browsers, as it’s incredibly fast, feature-packed and highly customisable.

In fact, the Android version resembles the desktop version of Chrome much more than the Chrome mobile app itself.

Dolphin comes with two awesome features — Gesture Browsing and Sonar. Gesture Browsing allows you to, for instance, draw an “N” on the screen to open a new tab or a “G” to surf to Google’s homepage. You can also customise the gestures to your liking.

Sonar, on the other hand, is a brilliant way to browse using voice commands and it’s pretty accurate, especially if you want to visit popular websites.

If speed is what you want then you should check out Javelin (Android only). Made by a one-man team, Javelin has a built-in ad blocker which filters out most ads, allowing you to surf faster. This also means that it’ll take up less of your data bandwidth. 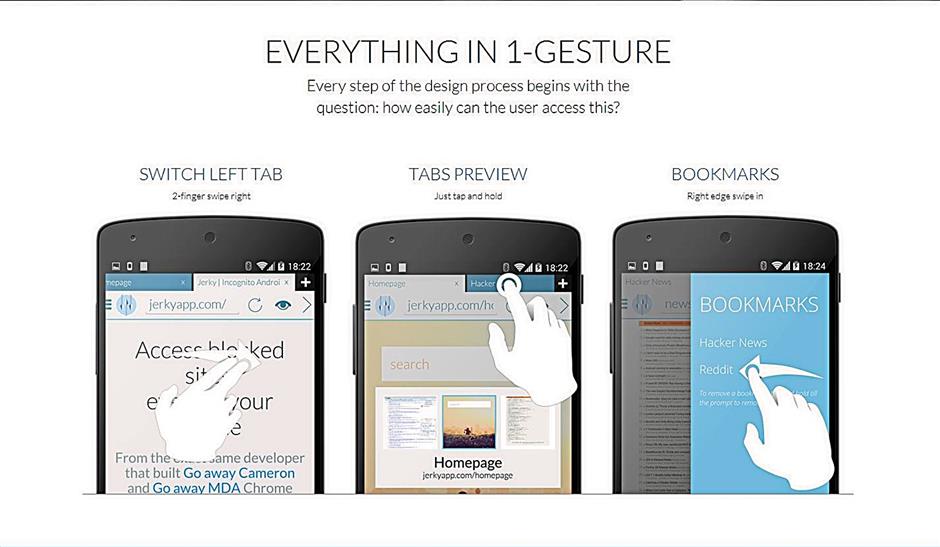 Javelin also simplifies browsing with handy gesture commands for switching tabs, ­accessing your bookmarks and getting a ­preview of open tabs. It also has a Reader mode which reformats a webpage into an easy-to-read page.

While it’s free, it comes with in-app ­purchases for unlocking features like Spirit Mode (US$1.99 or RM8) which allows the user to get around websites blocked by a company’s web proxy.

The free version also limits the number of open tabs to 10 and doesn’t allow the user to change the homepage. It costs US$2.99 (RM10) to remove these limitations.

Firefox doesn’t offer elaborate features but it’s stable and straightforward to use. If you want more features you can install ­add-ons and extensions, just like on the desktop ­version.

It’s also one of the few browsers that still supports Flash which makes it very versatile, as a lot of websites still use it.

It also has a Reading Mode that strips down web formatting to present a simple page to you. On the downside, it’s not as fast as the other browsers but this will change with time as it’s continually being updated.

Chrome is one of the most widely used desktop browsers in the world and it’s rising in popularity on the mobile front as well.

The mobile version is simple and speedy, and it can sync tabs and bookmarks across multiple devices. This makes it easy to, say, seamlessly continue browsing from your PC to a smartphone.

It has Google Voice Search which lets you quickly search the Web by speaking instead of typing.

More and more people are using their smartphones to shoot photos instead of a dedicated camera which is not ­surprising. While the stock camera app on most ­smartphones are pretty good but there are better ones on the app marketplace.

There are tons of camera apps for both platforms but one of the best is Camera360 Ultimate. The number of modes, effects and filters the free app comes pre-installed with is simply amazing. And if you are not satisfied, there are plenty more you can download and they are mostly free.

Camera360 also allows you to back up your photos to is own Cloud service.

On the downside, most of the features are for post-capture editing and not for snapping photos. 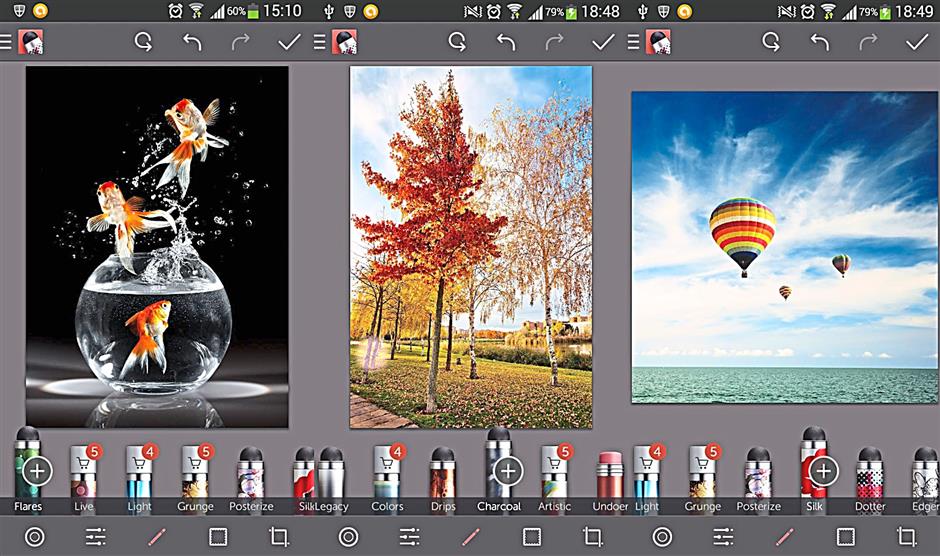 Style brushes in Repix allow you to add and mix effects to create funky images.

If you are a new user, VSCO Cam (Android, iPhone) is a straightforward app that makes it easy to capture photos with its clean ­interface.

However, the advanced features only seem to be available for iPhone for now — this could be because the app was launched on the iPhone first.

Only iPhone users will enjoy features such as the ability to lock exposure, focus and white balance independently. It also has a handy digital level meter for keeping your photos straight.

However, it has an unusual flaw — it doesn’t automatically save photos to your camera roll and you must do it manually.

Although the basic filters are sufficient, users can purchase more and they are priced between US$0.99 (RM3) and US$5.99 (RM19).

If you want an app that’s focused more on Android than iPhone, try Cymera. It has all the basic photo editing features as well as effects, filters, and borders. What makes Cymera good is that the interface and ­presentation make it fun to use this app.

The Android app has received a major update and facelift which has yet to reach the iPhone version.

Nowadays you don’t have to transfer your photos to a PC to edit, as there are a lot of apps that allow you to do basic editing on the device itself.

While many camera apps include photo editing features, they are not as powerful as standalone apps.

The control point system makes it easy to enhance an object in the picture without ­having to select its borders manually. So, if you wanted to change the colour balance of a rock, you can place a control point on it and make adjustments without affecting the rest of the picture.

Another app worth considering is Repix (Android, iOS). Instead of offering standard filters, Repix comes with style brushes that let you add effects such as Flares, Grunge, Silk, Drips and Charcoal using your finger.

The app has tons of brushes and by ­mixing them up, you can create really funky pictures.

The regular brushes are free but you have to pay for the premium ones.

If you are a fan of Instagram then you will love Pixlr-o-Matic (Android, iPhone) which is free. It comes with loads of filters, overlays and borders, and more can be downloaded from within the app.

While it has more filters than its rival, Pixlr-o-Matic is just a photo editing app without the social aspects of Instagram.

For those who need more than filters, Pixlr Express should fill their need. It has all the advanced features you need to properly adjust an image on the go. You can crop, sharpen, smoothen and resize images, as well as adjust the colour, contrast and brightness.

When it comes to music, you can never have enough. Instead of ripping songs from CDs or buying them on an online store, you can subscribe to a number of services that give you access to a wide range of songs.

These services come with free apps on both the iOS and Android platforms.

One of the best is Spotify — even if you don’t subscribe to the service you will have access to all the songs but the app will play them in shuffle mode or include ads in between tracks.

There is also a Radio option where the app will recommend stations based on your ­listening pattern.

The latest update has overhauled the design for a better experience which is ­consistent on all platforms, including the Web and tablet.

To remove the limitations you have to subscribe to the premium service which costs RM14.90 per month. Maxis subscribers will enjoy a discounted rate of just RM10 a month.

Another popular choice is Deezer, the ­second largest European music streaming service provider with over 30 million tracks. Deezer has also started offering a better free service but it also includes ads from time to time when you are listening to songs.

Deezer’s premium+ service is currently on promotion for RM7.45 per month for six months before it returns to the regular price of RM14.90.

But if you are a DiGi postpaid subscriber you could get it for free if you are on plans such as DG SmartPlan 78, 108 or 148.

Whether you choose Spotify or Deezer will depend on their music selection and which interface you prefer.

Those who are into the indie scene will prefer Soundcloud, the social sound platform. It offers a lot more indie music, remixed tracks and radio podcasts.

The mobile app has been improved ­recently and now is as good as the Web ­version.

The problem with mobile phones is that you can damage them beyond repair or lose them much more easily than, say, a PC. It’s important that you always back up the data on your phone.

Nowadays, you can back up to the Cloud which also makes it possible to share the data with other devices such as a PC or tablet.

It’s worth mentioning that the iPhone comes with its own service called iCloud which backs up most of the information on your device but there is no harm in signing up for a third-party service as they can co-exist.

Four of the most popular services are Google Drive, Microsoft OneDrive and Dropbox. All three have a free option and are available for both Android and iPhone, as well as many other platforms.

Google’s service offers the largest storage space for free — users will get 15GB of space which should be sufficient for most uses. You can upgrade to its premium service which starts at US$1.99 (RM6) per month for 100GB of space.

Drive has a pretty basic interface but it does a good job of tying up all of Google’s various services such as Gmail, Maps and YouTube.

Microsoft’s service has been renamed from Skydrive to OneDrive. The company offers 7GB of free storage and its service makes it easy to work with its products. For instance, if you have a Windows 8 machine, OneDrive is built into the operating system which will make it easy to share stuff between your PC and mobile phone.

The other choice is Dropbox. It’s one of the most widely used Cloud storage service but only comes with 2GB of free storage. There are a number of things you can do like ­inviting friends to try the service to get more free storage.

Also, if you own a new Samsung ­smartphone like the Galaxy S5, you will get a whopping 48GB of space for free for two years.

For Cloud storage, there is no harm in using all three services, as you will be getting even more space.