Big push into gaming brings out Amazon's gentler side

SAN FRANCISCO: Amazon.com Inc, a company known for its ruthless drive, is courting the free-wheeling coders and dreamers of the gaming industry with a lighter touch as it seeks to break into an arena now dominated by Apple and Google.

The online retailer, infamous for undercutting rivals and pressuring suppliers, hopes that making nice with game developers will help it build a vibrant app platform on its new Fire TV and gain ground in an area where it severely lags the competition.

For example, Amazon last year contacted London-based developer Ashraf Hegab out of the blue. In contrast to the sink-or-swim style of Apple's and Google's app stores, Amazon promised to promote his game actively if he brought it to its platform, he said.

"With Amazon, it feels a lot more intimate and personal," said the founder of eight-month startup Playir. "With Apple, you get feedback, but it's a more formal Q&A. You feel like you're being judged."

Gaming is the top revenue generator and one of the top five activities on smartphones and tablets, and to catch up, Amazon must compete with rivals Apple and Google for users and developer time. 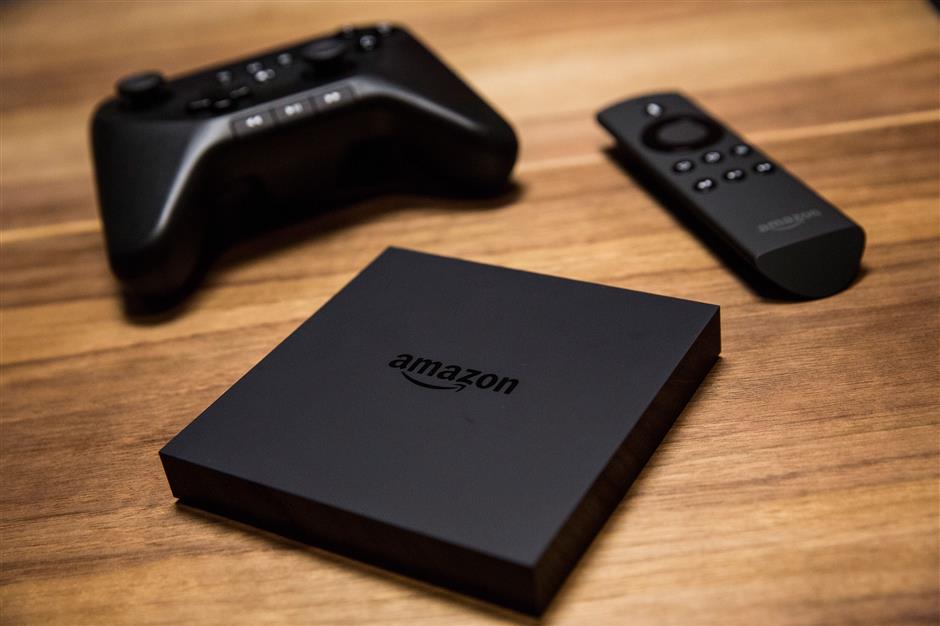 BIG PUSH: The Amazon Fire TV along with its remote control and gaming controller at a media event in New York City. — AFP

Last week, Amazon doubled down on its gaming strategy with Fire TV, a palm-sized US$99 (RM319.82) streaming device that also allows users to play games on their televisions and, executives hope, will help displace some of the millions of costlier Microsoft Xboxes, Sony PlayStations and Nintendo Wiis in households.

For nearly 20 years, Amazon — a company that chief executive Jeff Bezos nearly named Relentless.com — has been anything but friendly in its drive to offer customers the lowest possible prices on everything from kitchen knives to diapers.

But game developers say Amazon has forged a bond with developers over the last two years by offering marketing support, feedback and other perks. It is building credibility by hiring respected veterans for its in-house gaming studio.

It has offered discounts on Amazon Web Services, the cloud computing service used by a majority of startups. And in some cases, it is even giving them money to test its ad services.

"We obsess about making that easier and easier — the tools that we provide, the support we give through our business development teams," Mike Frazzini, vice-president of Amazon Games, told Reuters in an interview.

Some remain sceptical of the Fire TV's ability to go head-to-head with Apple TV, or edge out the top-selling PlayStation4.

Developers expect Apple to bring gaming to its streaming box. Its iOS platform already commands a large contingent of mobile app developers, a handful of whom have built billion-dollar companies.

There has yet to be a breakout game title or company from the Amazon platform like Finland's Supercell, whose two main titles — Clash of Clans and Hay Day — made US$2.4mil (RM7.74mil) a day in revenue last year. The Internet giant hopes to change that.

Amazon "has pissed off a lot of book publishers and others in e-commerce, but not developers as much," said Zaw Thet, a partner at Signia Ventures, which backs a number of game startups.

"I don't think Amazon really cares about making money through game revenue. They care about capturing your attention and up-selling you all of the products that have to do with that."

The iPhone's arrival in 2007 created a population of gamers addicted to affordable or free games played in bite-sized chunks of several minutes. Amazon thinks there's a market for the same sort of more casual game on the living-room TV, away from time-intensive "hard-core" console titles like Call of Duty.

But it's unclear how strong demand will be. Ouya began selling its US$99 (RM319.82) Android game console last year but has had disappointing sales.

"The big question is where is the consumer demand for that because it's so easy to access those games in so many different ways," said David Cole, an analyst at DFC Intelligence.

Others warned not to dismiss the company that in two years has captured a significant share of the tablet market. Amazon has data on consumers' buying habits and their credit cards on file, making it easy to make in-app purchases, executives said.

"They understand customer relationships and one-click shopping and if you put in the technology section, there are lots of interesting capabilities to disrupt the space," said Kent Wakeford, chief operating officer of social and mobile game developer Kabam.

Developers designing games for Fire TV or considering it hope their apps will catch on with Amazon's estimated 240 million users. More than 800 million Android devices were sold in 2013 and because Amazon's platform is based on Google's software, it does not take much effort to adapt games to Amazon's app store.

Amazon has successfully jumped into new sectors before with the Kindle e-reader in 2007. By then, it had earned a reputation among book sellers for its ruthlessness.

Game developers say Amazon has so far demonstrated nothing but a willingness to collaborate and promote their games in ways Apple and Google do not.

Amazon recently gave some developers US$500 (RM1,614.25) to test its ad campaign tool, said VNL Entertainment founder Lucius Yu. They also gave him free Amazon coins for users to spend on purchases made within its School of Chaos.