LONDON: Dennis Aabo Sorensen lost his left hand when a firework rocket he was holding exploded during New Year's Eve celebrations 10 years ago, and he never expected to feel anything with the stump again.

But for a while last year he regained his sense of touch after being attached to a "feeling" bionic hand that allowed him to grasp and identify objects even when blindfolded.

The prototype device, which was wired to nerves in the 36-year-old Dane's left arm, blurs the boundary between body and machine and scientists hope it could one day revolutionise the lives of many amputees.

There is still work to be done in miniaturising components and tidying away trailing cables that mean the robotic hand has so far only been used in the lab, but Sorensen said the European research team behind the project had got the basics right.

"It was a great experience. It's amazing to feel something you haven't been able to feel for so many years," he told Reuters in a telephone interview. "It was pretty close to having the same feeling as in my normal hand."

Details of his month-long use of the bionic hand, including results from a week of concentrated daily tests, were reported by researchers from Italy, Switzerland, Germany, Britain and Denmark in the journal Science Translational Medicine on Wednesday.

Alastair Ritchie, a bioengineering expert at the University of Nottingham, who was not involved in the research, said the device was a logical next step but more clinical trials were now needed to confirm the system's viability.

"It's very exciting preliminary data but it's a one-case study and we now need to see more cases," he said.

Despite notable advances with prosthetic limbs, current artificial hands fall down when it comes to providing sensory feedback — a key element in human dexterity.

In his every day life Sorensen uses a commercial prosthetic hand that can detect muscle movement in his stump to open and close his hand, but provides no sense of touch and requires him to watch constantly to prevent objects being crushed.

Ultra-thin electrodes the width of a human hair were surgically implanted into the ulnar and median nerves of Sorensen's arm before he was attached to the robotic hand, which is equipped with various artificial sensors.

These sensors measure the tension in man-made tendons on each finger to assess the force used to grasp different objects, while computer algorithms transform this information into an electrical signal that the nerves can interpret.

The result is real-time sensation, including a gradation in feelings that allowed Sorensen in tests to detect both shape and consistency. In a series of experiments, he was able to recognise the basic shapes of objects, such as the cylinder of a bottle, and also feel differences in the stiffness between a mandarin orange and a baseball. 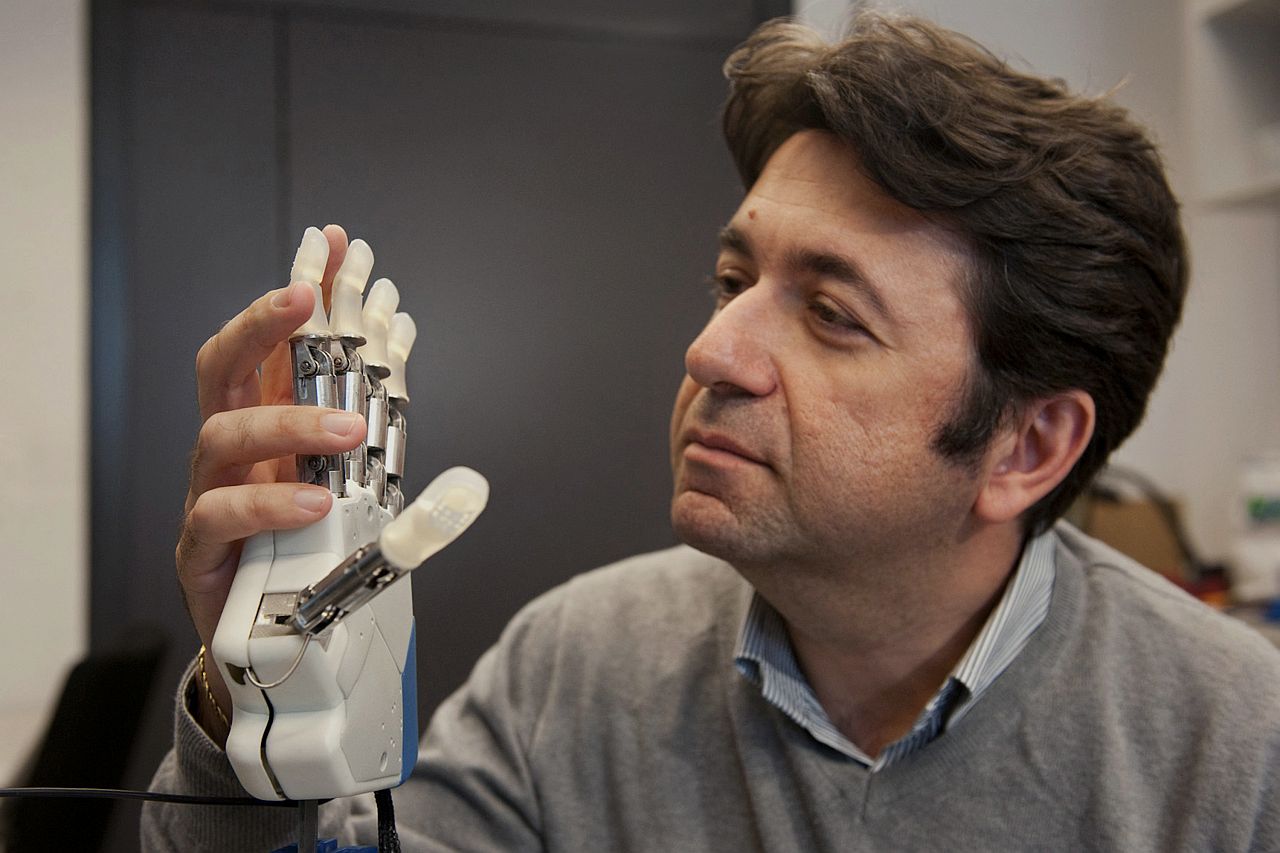 It is a big advance on an initial LifeHand 1 device unveiled in 2009, which was less refined and was not implanted on the patient but only connected through electrodes.

There is still a need for further work, however, in order for the new hand to differentiate between more detailed textures, as well as between hot and cold.

Silvestro Micera, an engineer at the Ecole Polytechnique Federale de Lausanne and the Cuola Superiore Sant'Anna in Pisa, said the challenge now was to ensure the system could remain implanted on multiple patients for "many months".

"Our final goal is to have this in clinical practice in five, six or seven years time — but the next step is to show in two to three years that this can work long term not just in one patient but in several patients," he said.

Assuming further clinical trials go well, the research team is likely eventually to bring in a commercial partner, although Micera said this was not on the cards just yet.

One big unknown is cost. The high-tech device will not be cheap but Micera said the surgery to implant the electrodes was relatively straightforward, which should limit hospital bills. — Reuters