It’s a big world out there, and it’s one that’s rich with data.

Ever since tech dependent lifestyles have become the order of the day, society has unwittingly been leaving behind lots of digital information trails as individuals go about their daily lives. This growing mass of data exhaust offers wealth untold and an increasing number of organisations have started to leverage on the power of Big Data such as these.

“The definition for Big Data differs for each organisation,” says Dr Mark Chia, analytics lead at SAS Institute Sdn Bhd. “Basically, if the data exceeds an organisation’s ability to analyse the data in a timely manner, that’s when it’s considered Big Data for them.”

According to Chia, Big Data comes in many forms. It can be differentiated based on its velocity (the speed at which the data is received), variety (structured or unstructured) and its volume.

In order for companies to progress and gain better insights into their customer base, he says that they would need to take into account both structured and unstructured data.

Chia offers a simple example for differentiating structured and unstructured data. On mobile app stores such as Google Play or iTunes, the total number of downloads for a particular app would be regarded as structured data, whereas unstructured data would be the various comments written by users when they submitted reviews for the app. 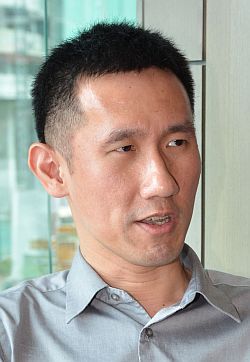 Chia: “The definition for Big Data differs for each organisation.”

“You can then see the correlation between the number of downloads and the sentiments people have about the app. You won’t get the full picture of what’s happening unless you analyse both kinds of data. For instance, a decrease in downloads could be because of bad user feedback,” Chia says.

He adds that SAS tools such as Social Media Analytics and Text Analytics can help companies make sense of unstructured data.

“What it does is it basically analyses data from blogs, news websites, forums and social media websites such as Facebook or Twitter. Then, a sentiment analysis is performed and we can find out whether a post is positive, neutral or negative. The idea is that you are able to go through these unstructured data to identify what the public thinks about a company or a particular topic,” says Chia.

He says that this would give a company a competitive edge as it could then respond to unfolding situations in real time. Such an organisation would also be able to make better decisions due to the additional insights gained from such analytics.

“You’d be interacting with your customer at the point where they have an issue,” Chia adds.

This is especially crucial in today’s fast paced world, where ordinary events can quickly take a turn for the worse if an organisation is not vigilant.

“With the advent of technology and social media, everything has changed. It’s now the individual customers who decide where they want to shop and what they want to say about the company. If someone has a negative experience with the company, they’ll make sure everyone knows about it,” says Chia.

But the benefits of analytics are not confined to the realms of commerce alone.

A United Nations initiative known as Global Pulse has also explored how Big Data can be used to help policymakers around the world to track and deal with socio-economic issues such as unemployment or hunger more effectively.

“Traditionally, when it comes to analysing population sentiments, it’s always been a laborious affair. Government decision makers can now pre-empt a major economic downturn just from analysing conversations. They can identify what has happened before and put policies in place to prevent it from happening again in the future,” claims Chia.

“It would be more transparent because you would be showing the people that this is why you’re doing something. As long as you can justify and backup all your decisions with facts, you would have nothing to hide.”

However, this does not completely eliminate the need for leaders to make intuitive judgment calls.

“The facts will give you a pointer towards what needs to be done but you would still need leaders who are able to use their expertise to make those informed choices,” Chia adds.

Reflecting on the local landscape, he says many Malaysian companies have become aware of the need to move into Big Data and analytics.

However, Chia adds, “I still think that they still some way to go in terms of fully utilising analytics within the organisation.”

Among all the economic sectors, he says the telecommunications and financial sectors are among those that have become more analytically inclined in recent times.

In general, Chia advises corporate leaders to devote time to developing an analytics roadmap for their organisation as it will help them stay ahead of the game.

“You probably might start things off on a smaller scale, maybe localised to a particular department. Introduce them gently to analytics, to how it will work and how it will benefit that department and then work it up across the entire enterprise. Ideally, what we want is for the company to grow its own analysts in-house in the long run,” he says.

Related story:
Big data is good for government too