PRESS TO PLAY: You can control the camera and music playback using the O-Click gadget.

Having reviewed the Oppo N1 when it first landed on our shores, we couldn’t help but notice that the design of the successor has vastly improved aesthetics and ergonomics.

The new model is called the N3, as the company follows an odd numbering system for its products and as such there isn’t an N2.

With the N3, Oppo has outdone itself, giving it a unique design that’s both pretty and practical. Although it’s largely made of plastic, it looks like it can handle a knock or two. 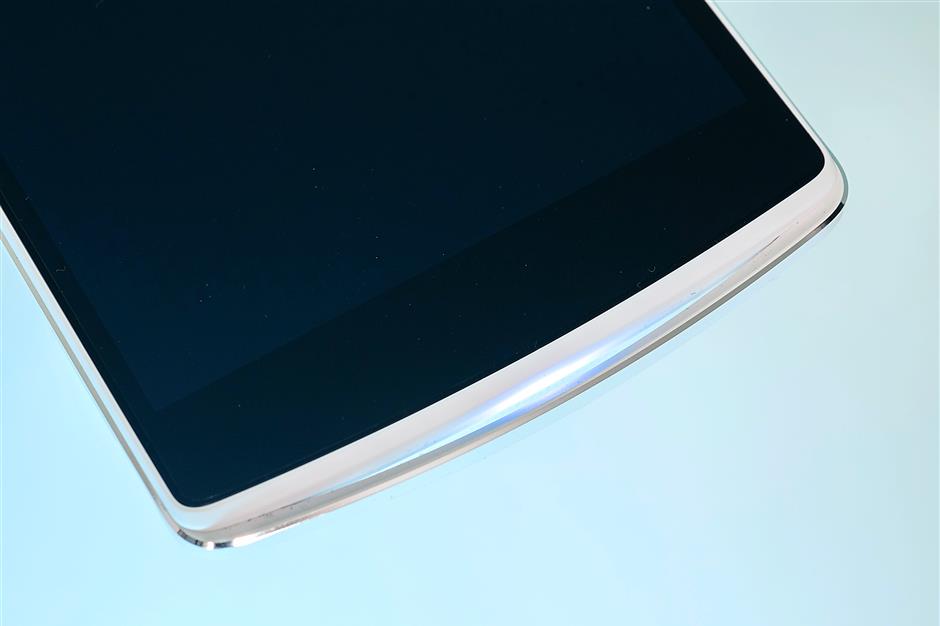 BLINKING LIGHT: You will know if you missed a call or message thanks to the bright Skyline Notification light.

A thin metal strip runs along the edge of the phone, extending out in a curve at the bottom to make space for the LED notification light.

Oppo calls it Skyline Notification 2.0 and it’s broader than a standard Android LED light. As it’s located at the bottom, it’s noticeable when the phone is placed face up or down which is great.

However, it’s puzzling that it has only one colour — white — which limits customisation.

Size matters
The N3 has a 5.5in screen, a tad smaller than the N1’s which stands at 5.9in. The screen has good viewing angles as well as colour accuracy, and is sufficiently bright.

Also, the reduction in size makes the N3 much easier to hold and operate with one hand.

Just like the N1, the N3 has a touch panel on the back but it has been improved to include a fingerprint sensor for authentication. It’s quite intuitive for unlocking the smartphone but you will need fairly large hands or long fingers to reach the sensor. Also, the sensor took a few tries to recognise our finger on some occasions. 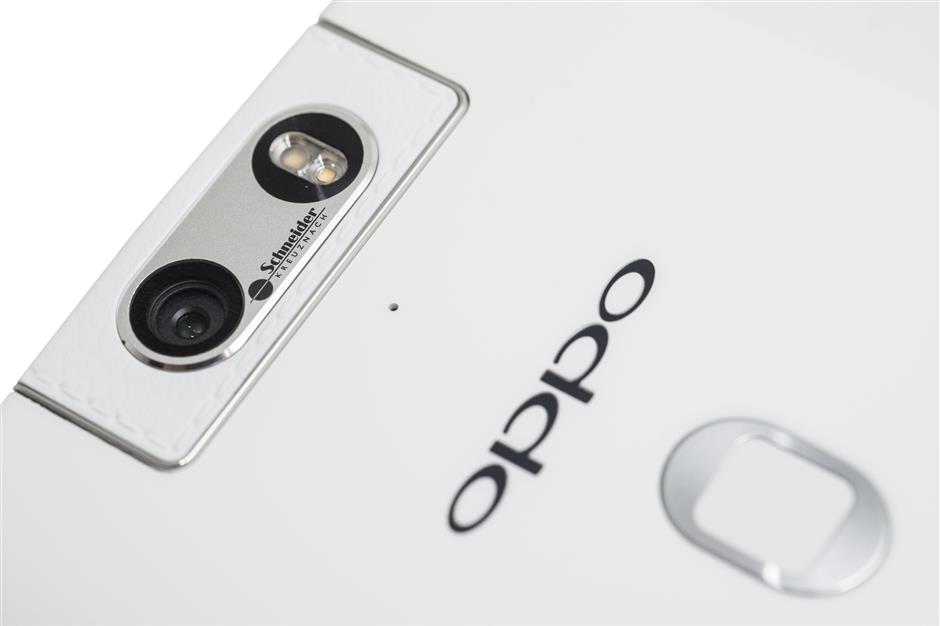 Secure your smartphone: The touch panel on the back can be used for authentication.
The audio jack and USB port are on the sides, as Oppo had to use the top for the motorised camera and the bottom for the Skyline Notification. This will be a problem if you like to listen to music on the go, as the cable for the earphones will be sticking out on the side which can be uncomfortable when the phone is in your pocket.

The N3 is no slouch in the performance department — it suffered no lag and operated smoothly throughout the review period even when handling demanding games.

Two-in-one
Oppo was the first to feature a rotating camera in a smartphone with the N1. It has improved it in the N3 by making it motorised and bumping up the resolution from 13 megapixels to 16.

You’ll especially appreciate it for panorama shots, as you don’t have to pan the camera from side to side as the motorised camera will take care of this.

Image quality and detail were good thanks to a better sensor although we noticed a slight purple fringing in some shots. 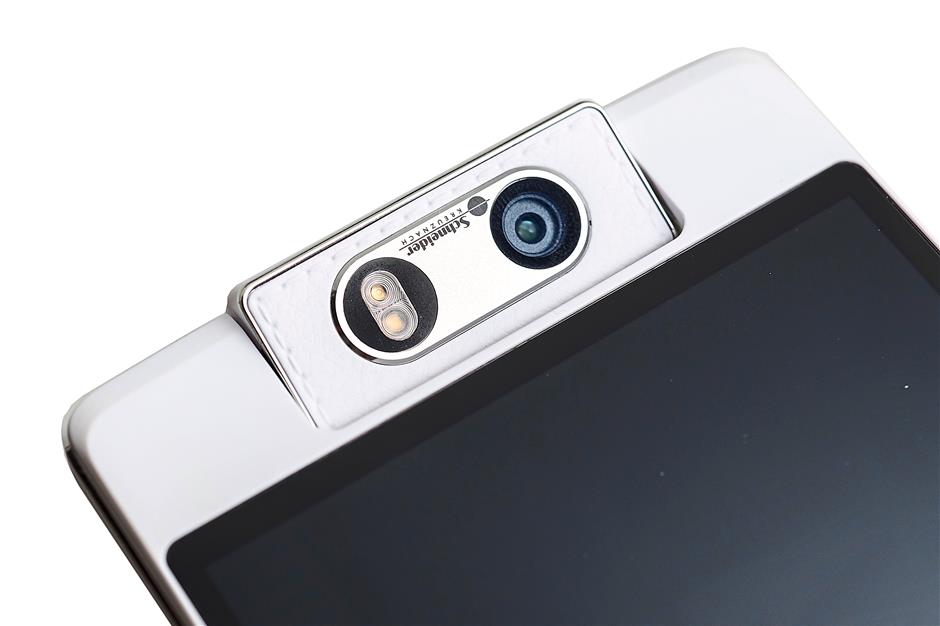 UNIQUE: The 16-megapixel motorised camera doubles up as both the front and back camera.

The N3 only has one camera which doubles up as both the front and back unit, as it can rotate. Selfie shots looked great but we are not surprised as it’s probably the only smartphone that has a front 16-megapixel camera.

The only downside is that the rotation mechanism is a little loose and the camera can move while in the pocket.

The speaker on N3 is surprisingly loud and clear, and the Wave Maxx Audio sound setting allows you to tweak it to your liking.

User interface
The N3 runs on Android 4.4 KitKat with the company’s ColorOS 2.0 user interface (UI), which  looks sleek with a translucent and modern design.

The UI isn’t drastically different from the stock Android version which means most users will not have trouble adapting to it. 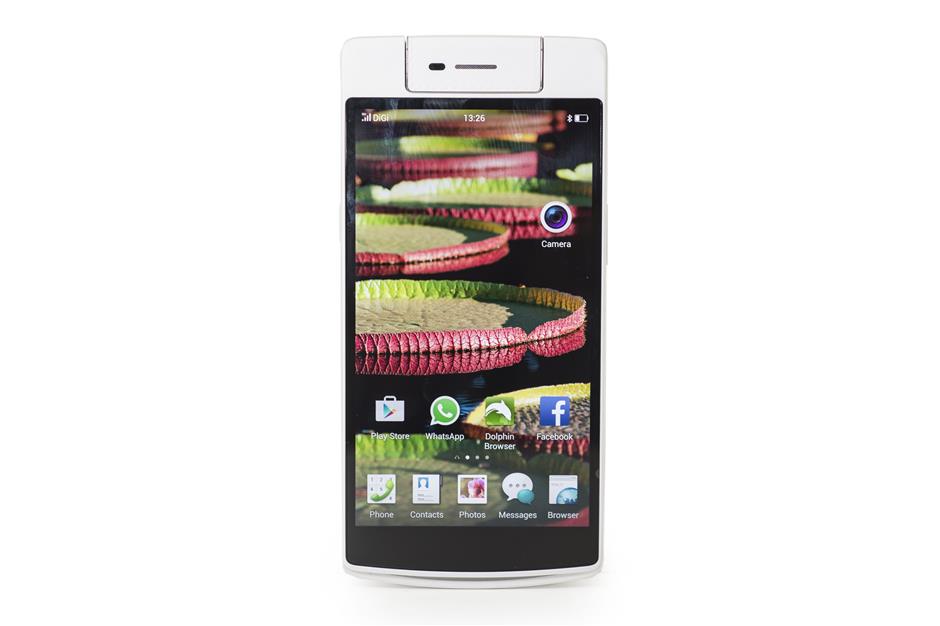 The ColorOS user interface looks better than ever.
However, the settings page looks a bit drab as it’s mostly monochrome and also because we have seen the one on the Oppo R5 which is in colour. Also, the App Drawer has been removed in this version, so all apps installed on the smartphone will appear on the homescreen instead of the App Drawer.

There is no word yet when and if the smartphone will receive an update for Lollipop.

In terms of battery life, the N3 easily lasted a day even though it was used a lot for posting on social media networks such as Facebook, Twitter and Instagram, all of which were done mostly over the 4G network.

On some days we have even managed to stretch the battery life to 1.5 days.

Like most Android models, the N3 tends to heat up if used extensively but not to a point that it’s unbearable to hold.

It’s not really a problem if the smartphone runs out of battery as long as you are close to a power outlet, as the bundled charger has a rapid charging function that can boost up the power level to about 75% in just 30 minutes.

The charger is also a lot less bulky now so it’s easy to lug around with your smartphone.

Conclusion
In terms of design and functionality, the N3 outshines its predecessor.

There is a lot to like about the smartphone such as the Skyline Notification and motorised camera, both of which make this device unique in a crowded Android market.

If you are looking for a solid Android smartphone that stands out then check out this model.

Pros: Amazing selfies with 16-megapixel camera; motorised camera is handy for shooting panoramas; battery easily lasts more than a day.
Cons: Only one colour for notification light; has not been updated to Lollipop yet.