Samsung has a track record of generating immense hype for its flagship smartphones. Year after year, many around the globe eagerly wait for the announcement of the electronic giant’s latest Android smartphone.

This year is no different, as the company has released the Galaxy S5, the new flag bearer for its highly popular Galaxy line.

One constant upgrade we have seen with the Galaxy S devices over the years is in the size of the screens. Continuing this trend, the S5 has a screen that is 5.1in big, a minor upgrade from the 5in of its predecessor, the S4. This makes it only 0.2in smaller than the original Galaxy Note, which started the whole phablet category (devices that are too big to be categorised as phones and too small to be tablets). Due to its thin bezels, the S5 doesn’t feel like a phablet, and is still very manageable with one hand.

Super Amoled screens are known for their vibrant colours and the one that the S5 is equipped with doesn’t disappoint. Unless you are one of those who is against the colours on such screens for not being natural enough, you will be satisfied with the display and its Full HD resolution. 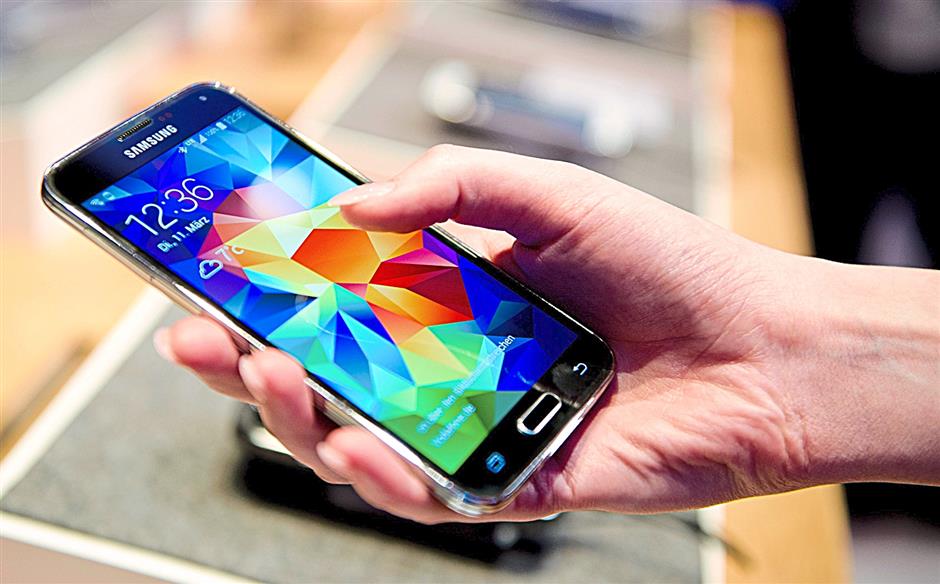 BRILLIANT HUES: Super Amoled screens are known for their vibrant colours and the one that the S5 is equipped with doesn’t disappoint. — EPA

While the front of the S5 has the same look we have come to expect from Samsung ­devices, the reverse side has undergone major changes. The S5’s back cover is still made out of plastic, but has a faux-leather design similar to the Galaxy Note 3, minus the fake stitching and decorated with indented dots instead. The back cover offers better grip and a more ­premium feel than its predecessors, but will disappoint those who were expecting the highly rumoured metal casing.

The review unit that we received has 16GB internal memory. As the operating system (OS) and built-in apps occupy the same space, the user only gets about 10GB. If this is insufficient, the S5 has a microSD expansion slot. 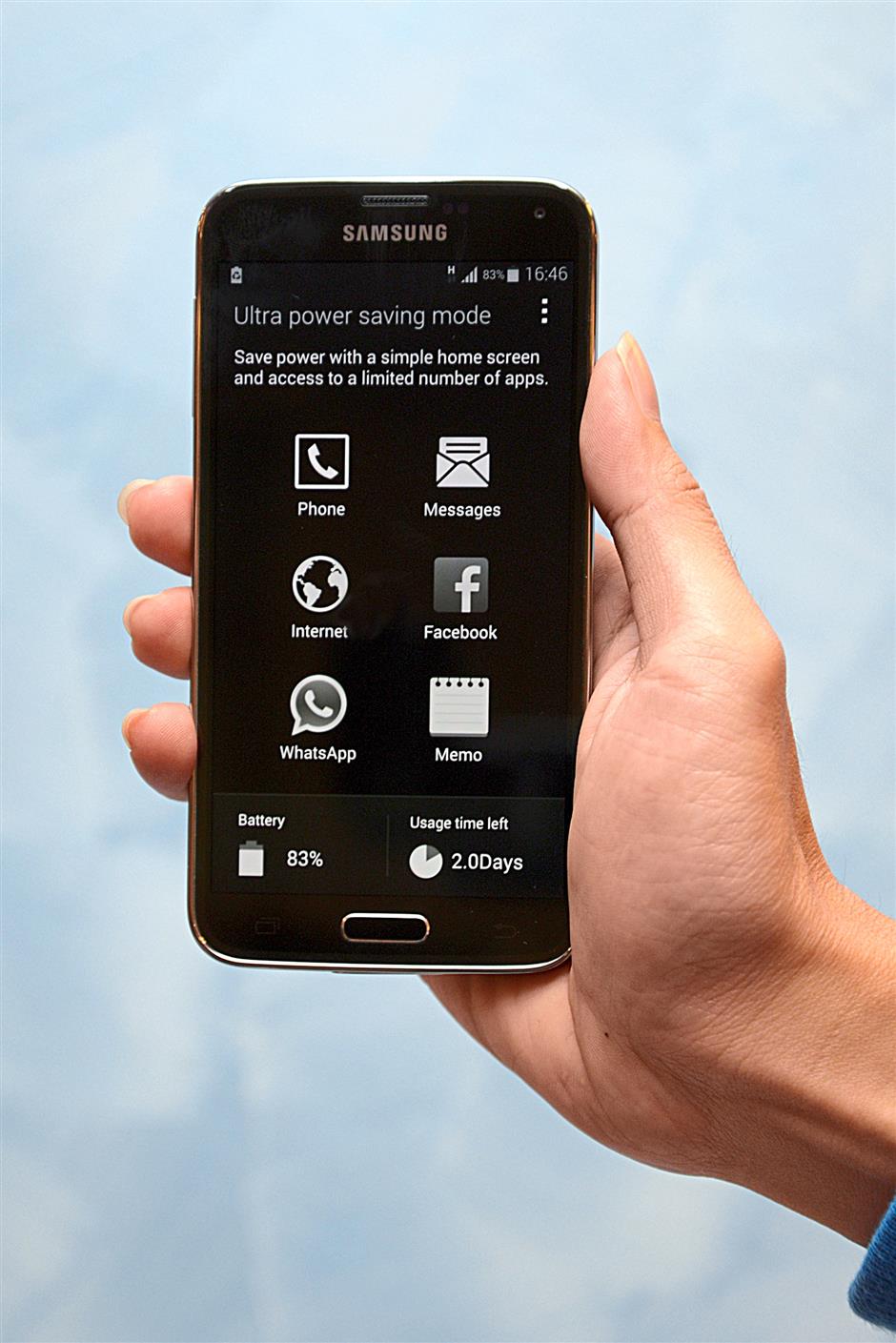 On moderate usage, the S5 managed to last a day and a half before requiring a charge. Besides the regular power saving mode, there is also an ultra power saving mode which switches the screen to greyscale and restricts access to applications, ensuring that the battery is used for critical features like making calls.

With so much firepower, the S5 is one hot device, literally. We have experienced instances where it started to heat up on us. This problem isn’t specific to the S5, as we have encountered this in many of the smartphones on the market.

The S5 boasts some impressive specs, such as a quad-core Krait 400 processor clocked at 2.5GHz that powers the phone, as well as a Qualcomm Snapdragon 801 chipset and 2GB RAM.

The S5 runs on the latest version of Android KitKat 4.4.2, which is complimented by TouchWiz, the company’s customised user interface over the base Android OS. 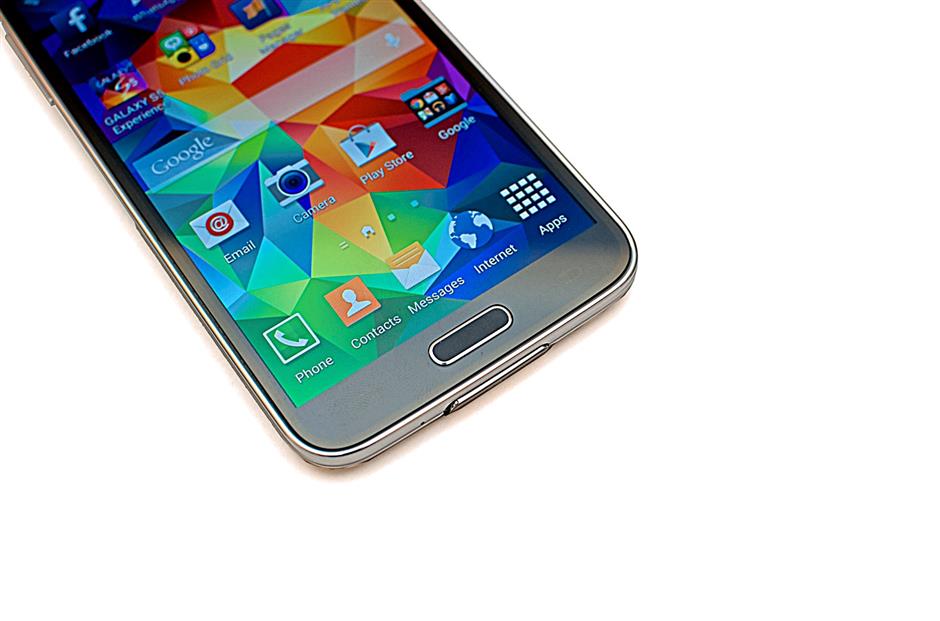 LOOKING SHARP: The new TouchWiz is refreshing and no longer as laggy as previous versions.

The version of TouchWiz on the S5 has received a major overhaul. The look is refreshing, and most importantly, is no longer as laggy as the earlier versions. In fact, the S5 felt more stable than any other Samsung device. If there is one complain we have about the interface, it’s in the number of options which can be a little overwhelming to new users.

Even in terms of software, there is a long list of offerings, such as air gestures and ­multi-windows, which have been introduced with past models. In fact, there are so many features that most people who get the phone probably won’t be aware of half of them until much later.

When we first tested the camera, what impressed us the most is the autofocus — it’s noticeably snappier than other smartphones that we have reviewed. The camera is also feature-rich, maintaining all the effects and modes from the previous devices while adding a few new ones such as selective focus. If that isn’t enough, users can also download more effects.

Pictures that we snapped were sharp with good colour balance. Camera performance in low lighting turned out quite respectable too.

Just like what was introduced in the Note 3, the video camera of the S5 is capable of shooting videos up to Ultra HD or 4K resolution.

Heart of the Galaxy

Located beside the LED flash is a heart rate monitor — all you have to do is place your finger on it and it will measure your heart rate. It seems like Samsung is really pushing for health awareness with the S5, as there are a number of fitness tracking features included in the S5.

Another much-talked about feature of the S5 is the fingerprint scanner. While it does work, you will have to ensure that your finger swipes down in a very similar way as the setup process for it to be recognised. 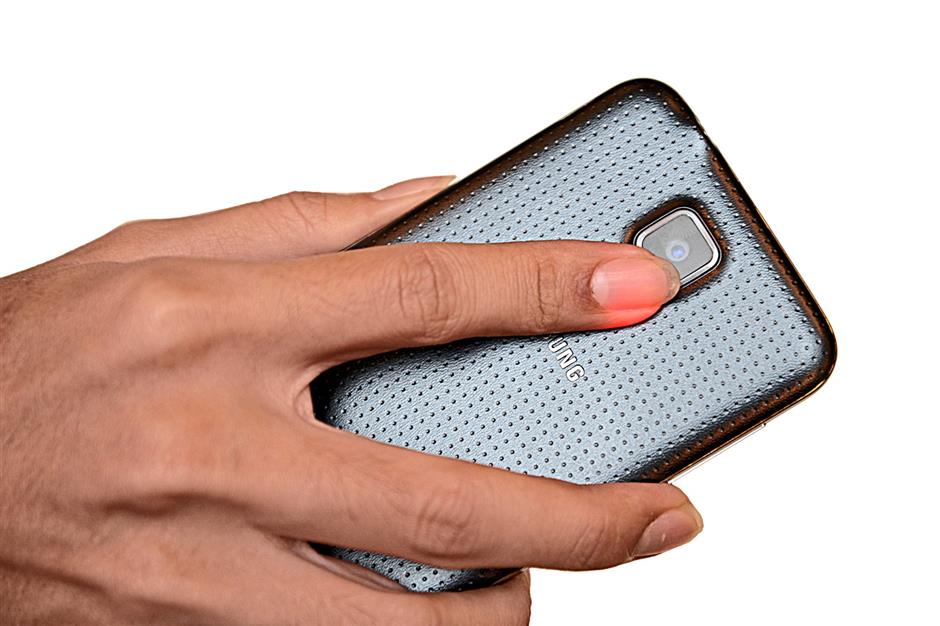 TELL TALE HEART: The sensor on the back allows you to measure your heart rate.

Users can register up to three fingers. For those who are worried about not being able to use your phone if something happens to your fingers, the setup process requires you to input an emergency password just in case you can’t get the phone to detect your finger.

Another change from past Galaxy S series phones that is evident is the dust plug for the microUSB port. This is in line with the device’s IP67 certification, which means that the S5 is resistant to dust and water. That means that your device will have higher chances of surviving a dreaded fall into the toilet bowl.

The Galaxy S5 proves to be yet another amazing Android from Samsung. Besides offering greater stability, the device has a long list of features to offer, too many to be covered in one review in fact.

Of course, the S5 does have its own shortcomings as well. The extensive list of features can be overwhelming, and can be a little confusing especially for those who are not tech savvy. The extra features eats up quite a fair bit of space, but thankfully the device has a microSD card slot.

The device is also prone to heating up, as we have encountered a few times when testing the camera and playing graphic intensive games. However, this is a common problem with many high-end smartphones and is by no means a fault specific to the S5 alone.

Despite facing tough competition from other manufacturers, the S5 will be a popular choice among those who are looking for a high-end Android device. It is a device that does justice to the lofty standards set by its predecessors.

Cons: Too much bloatware; heats up; not revolutionary.