Samsung Galaxy Gear -- FOR BYTZ USE ONLY

This watch tells the time... and makes calls too.

As innovation in the smartphone industry is slowing down, manufacturers are trying to tap into other potential markets, such as wearable devices.

Among the new entrants in this market this year, the Galaxy Gear has received the most attention, as it is the first smartwatch attempt by top smartphone manufacturer Samsung.

We put the Gear, which was announced alongside the company’s highly popular Galaxy Note 3, to the test.

In terms of looks, the Gear appears rather futuristic with its square design. It brings back memories of the many interactive watches portrayed in science fiction programmes during the 1980s and 1990s.

Those who aren’t used to plastic watches will undoubtedly have to get used to the feel of the Gear’s strap.

Despite the plastic quality of the strap, the Gear itself has one of the sturdiest builds among the smartwatches that we’ve come across with its stainless steel design for the watch case. The Gear has only one button, which is located on the right side of the device. This can be used to power on and off the screen, although there’s not much use for it as the Gear’s gyroscope works fairly well. Whenever you move your wrist up to look at the time, the screen will automatically turn itself on.

Screen visibility is not an issue, as we could still see the display with ease even while we were directly under the afternoon sun.

For the Gear to work, it has to be paired with a compatible Samsung devices such as the Galaxy Note 3 via the bundled adaptor which clips around the Gear.

The adaptor is also required for charging the Gear, as the port to plug in the micro USB cable is understandably placed on the adaptor and not on the Gear itself. The battery, at 315mAh, can last between one to two days depending on usage. 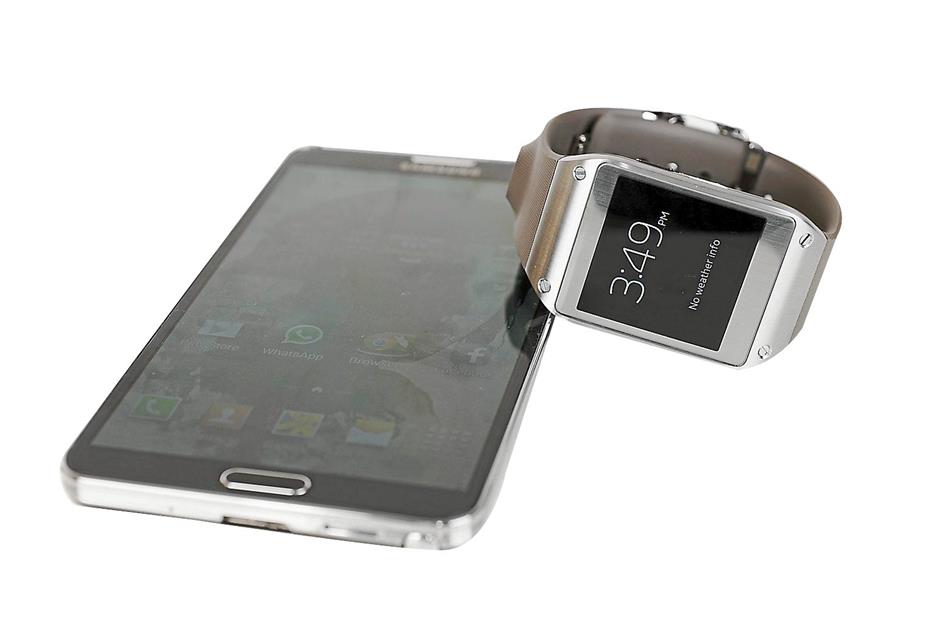 We used the Galaxy Note 3 and upon pairing with the Gear, we were prompted to download the Gear Manager app from the Samsung store.

The app functions as the brain of the Gear. Most of the tweaks and configurations of the Gear’s interface are set up via this app.

As a watch, users can choose from a selection of modes that are offered in Gear Manager. This includes numerous analogue and digital clock variations, as well as customisable shortcuts to accompany the clock.

Since there are no other buttons aside from the power button, navigating around the Gear’s interface is done via swipe and gesture control. As a rule of thumb, swiping downwards will take the user to the previous screen.

The other features of the Gear include reading SMS messages, receiving notifications for certain apps, controlling your smartphone’s media player, and counting the amount of steps you’ve taken as well the amount of calories you’ve burned.

One of the finest features is the auto lock function. If you walk away with the Gear from the paired smartphone or tablet when this is enabled, the screen will automatically lock itself up with a security method of your choice (PIN or pattern). This will be undone when the Gear comes back within range.

The main question that has been posed to us when we were seen with the smartwatch was whether it is capable of making calls, and the answer is yes. In a sense, it works like any other Bluetooth headset and transfers the calls from your phone to the watch. There is a loudspeaker and microphone built into the strap, so when making or receiving a call, you can speak to the watch, just like how the Power Rangers or Inspector Gadget used to do on TV.

Arm yourself with apps

New apps can only be downloaded via Gear Manager on the paired device. It allows users to access a new subsection of the Samsung App store which is otherwise inaccessible.

While the selection of apps is still rather limited, we’ve noticed that there was a steady increase of apps throughout our review period.

For now, users can check out different clock themes, fitness apps and third-party apps for connecting to social media networks.

When the Gear was announced, one of the features which raised our eyebrows was the camera. A camera on the wrist is a recipe for disaster in the wrong hands (pun intended). Samsung has addressed this by disabling the ability to mute the camera shutter sound. This means that there is no way to turn of the shutter sound, which can be pretty loud and attention-grabbing. Quality-wise, the 1.9-megapixel camera is actually decent. Don’t expect the image quality to be on par with your smartphones but they are better than anything that you can ever expect from a wearable device. Pictures can easily be transferred to the phone at the click of a virtual button.

In addition to snapping pictures, the Gear’s camera is also capable of shooting short video clips lasting no more than 15 seconds each.

Samsung’s Galaxy Gear is one of the most prominent smartwatches to be released this year and it’s expected to increase the adoption of wearable devices.

The main purpose of having a smartwatch is to minimise the need to take your phone out of your pocket when a new notification arrives. The Gear is great for this, as you can read your SMS without ever picking up your phone.

And as of writing this review, Samsung is expected to release an update that will allow users to read third-party app notifications to show up in full. In other words, you will be able to read messages from Gmail, Facebook, Twitter and more. The only downside is that the Gear will only work with a Samsung device running on Android 4.3 or above which means it works with a very limited device currently.

But as with the app update, the Gear can only get better with time.

Pros: One of the better built smartwatches in the market; unexpectedly good camera;