This Windows device is a computer for work, a tablet for gaming, and most unique of all, a portable sketchbook for artists.

There are three things we like using our ­computers for: Playing games, ­doodling ­cartoons and “working.” (Programming when the boss is looking, surfing the Web when he isn’t.)

This explains why the Microsoft Surface Pro has become one of our favourite gadgets — it’s a Windows 8 PC/tablet with a digital pen that we can carry everywhere. We love it!

That said, it’s not perfect. The Pro can’t compete with an iPad when it comes to ease of use, and it certainly can’t replace a dedicated gaming PC if you want to play something heavy like, say, Far Cry 3.

However, for a certain type of geek, the Pro is an amazing jack-of-all-trades — it’s a computer for work, a platform for light gaming, and (our favourite bit) a digital sketchbook for artists.

Want to know more? Well, here are our Pro impressions!

Have pen will travel

There are two basic questions that everyone asks us whenever we talk about the Pro, and the first is: What is it?

Essentially, the Pro is a fully-featured Windows 8 PC that has the portability of a tablet. It’s roughly the size of an iPad albeit twice as thick (27.5 x 17.3 x 13cm), and fairly lightweight at about 910g. GET CREATIVE: Draw and paint to your heart’s content using the digital pen that comes with the Pro.

One of its key highlights is a touchscreen that utilises Wacom technology — if you have an artistic streak, you’ll be able to gleefully draw and paint to your heart’s content using the digital pen that comes with the Pro.

We’ll get to the second question later, but first let’s see what the Suface Pro can — and can’t — do very well.

The Pro boasts 4GB RAM, a third-gen Intel i5 processor, a single full-sized USB 3.0 port, and either 64GB or 128GB of storage space (depending on the model you get), so it can run pretty much anything you throw at it.

Programming? Sure, we already have the Java JDK and a WAMP server installed.

Web surfing? Come on, you don’t even need to ask. We’ve comfortably used the Pro for all those activities, and the battery could last us for four to five hours.

Games? Okay, that comes with some caveats. We’ve been enjoying a bunch of games on it, including Minecraft, Bastion, Magic 2014, Monaco: What’s Yours Is Mine, D&D: Chronicles of Mystara and Terraria. (We love you, Steam.)

Some of our games could be played entirely on the touchscreen, but honestly, if you’re interested in gaming, the Pro’s optional keyboard cover, sold seperately, is mandatory.

There are two attachable ­keyboard covers for the Pro — the flat, pressure-sensitive Touch Cover and the I-have-actual-buttons Type Cover. When combined with the Pro’s built-in kickstand, these ­keyboards let you functionally transform the tablet into a laptop. 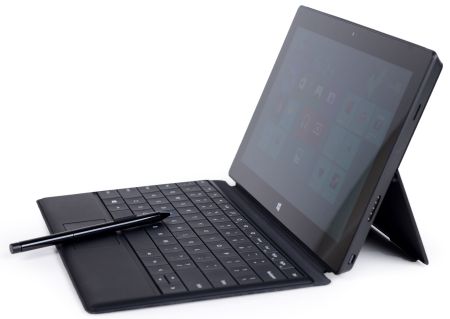 FLEXIBLE: The two attachable ­keyboards let you functionally transform the tablet into a laptop.

Now, did you notice what’s ­missing from the games we installed? If you said “any game that uses a significant amount of 3D” then you’ve earned 10 ­puzzle-­solving picarats! (Sorry, gaming joke.)

The Pro’s Intel HD 4000 graphics system makes it a poor choice to run pretty much any first/third-­person shooter asides from the ­original Doom. Heck, we tried installing Just Cause 2 — which came out way back in 2006 — and it could only run in a stutter even with most of the visual settings turned down.

The part about art

Fortunately, the Pro’s ­graphics system works perfectly for its role as a sketchbook. We installed Photoshop Elements onto our Pro, and this allowed us to whip it out anytime we wanted to doodle a ­cartoon or draw a comic strip.

Drawing on the Surface was fluid and the computer was very responsive, but to fully utilise the pressure sensitivity features of the pen, we’d strongly advise that you first install the Wacom WinTab drivers. It’s available here: bit.ly/1adm2mY (under Tablet PC) or here: bit.ly/YIqQ2a.

Here’s something really fun we did: We used the Surface’s two 720p cameras to take snapshots of our friends, then used those photos as a reference for caricatures. We just wish we could install drivers to improve our drawing abilities though; currently our friends kinda look like Doraemon.

The sketchbook functionality is actually the original reason we got excited about the Pro — it first piqued our interest when Mike Krahulik of Penny Arcade started using it to draw a number of comic strips.

If you’re not really into drawing, then no worries, the digital pen still has another use. The Pro’s hi-res 1,920 x 1,080-pixel screen, combined with the Windows 8 desktop environment, causes the icons/buttons on screen to be too small to be accurately tapped on using a finger. Happily, the pen easily solves this accuracy problem.

On that note, the icons-are-too-small-to-tap-using-fingers problem is actually indicative of some of the limitations of the Pro. Because the device straddles the line between a tablet and a computer, there are areas where the it’s inferior to a dedicated machine of either family.

For starters, getting the Surface out of sleep mode can take a few seconds, instead of the near-instantaneous awakening of an iPad. For another — and this is a weird one — the Pro isn’t as flexible as a laptop, in terms of where you can place it. NEAT-O: The Pro’s ­graphics system works perfectly for its role as a sketchbook.

Sure, as a tablet, you can use the Surface while you lie in bed, but if you’re sitting on a couch in front of the TV, the Pro’s kickstand-and-bendy-keyboard anatomy doesn’t lend to it sitting comfortably on your lap. Plus, the kickstand ensures that you can’t really change the angle of the screen, like you can with a laptop.

All said, those are small ­complaints, and the Surface Pro is still an amazing, well-rounded machine. Just be sure not to confuse the Pro with its ­functionally ­challenged brother, the cheaper Surface RT.

Quick aside, here’s our super-short review of the Surface RT: It’s Really Terrible. It doesn’t have the full features of a PC so you can’t even install PC games on it. If you’re even faintly considering the Surface RT, then our advice is to spend the extra cash to get the Pro (64GB) instead.

Earlier, we said everyone keeps asking us two basic questions about the Microsoft Surface Pro, and this is the second one: Should I get it?

Our answer is an all-caps YES! ...with a tiny disclaimer: If you’re already an established Mac user, then you’ll likely be more ­comfortable with a MacBook Air if you’re looking for portability and power. If you’re a professional artist with a big budget, you’re probably already aiming for a Wacom Cintiq, the luxury car of drawing tablets.

If you’re more interested in ­playing the next Call of Duty than smaller indie games, then you’ll still need a fully-spec-ed gaming rig instead of a PC you can carry around.

However, if you’re a geek who simply wants a lightweight, fully featured computer that you can take everywhere for work or some light gaming; and/or if you’re an artist who wants a mobile digital sketchbook; then you’ll find that the Microsoft Surface Pro is just flat out good.