TAXI MECH: Your ground troops are the key to winning most battles, and sometimes you just need to use your big ol mech to ferry your troops around to their destinations.

Here is a game where you not only command an army of robots, but you yourself are a giant transforming robot.

So what happens when you add giant transforming robots into a videogame that’s a cross between an RTS (real-time strategy), MOBA (multiplayer online battle arena) and twin-stick shooter? Why, you get the awesomeness of AirMech, that’s what! QUITE OFFENSIVE: Turtling won't help — the only way to win in AirMech is to constantly attaaaaack!

AirMech is a strategy game where you command an army of robots to destroy your enemy’s Fortress while defending your own. That’s the basic premise. The fun part is when you realise you’re not some armchair general giving orders from above. You’re out there on the battlefield with your troops, piloting a titular Air Mech that transforms between a mobile aircraft and a heavily armed giant robot.

This sounds pretty cool (and it is!) but you first need to wrap your head around the fact that playing AirMech feels a lot like playing two different games at once: you’re both a soldier in an action-centric, twitchy, top-down/twin-stick shooter and a general in a strategy game. THE BEST DEFENCE: Sometimes protecting your outposts will require you to have so, so very many guns.

The action game/shooter bit is pretty simple — you see enemies and you shoot, pew pew. You gain levels and you unlock new abilities, like missile barrages or healing beams. You kill, you die and you respawn.

The strategy game aspect meanwhile can be a bit of a micromanagement mind-bender, as you need to personally deploy individual troops onto the battlefield. And then keep an eye on them so they don’t march straight into a wall of turrets. It’s a bit like babysitting, except the kids are unapologetic engines of wanton destruction. (So... pretty much like babysitting after all.)

The micromanagement thing might sound like an issue, but honestly, all these elements combined actually leads to some pretty intense gameplay. 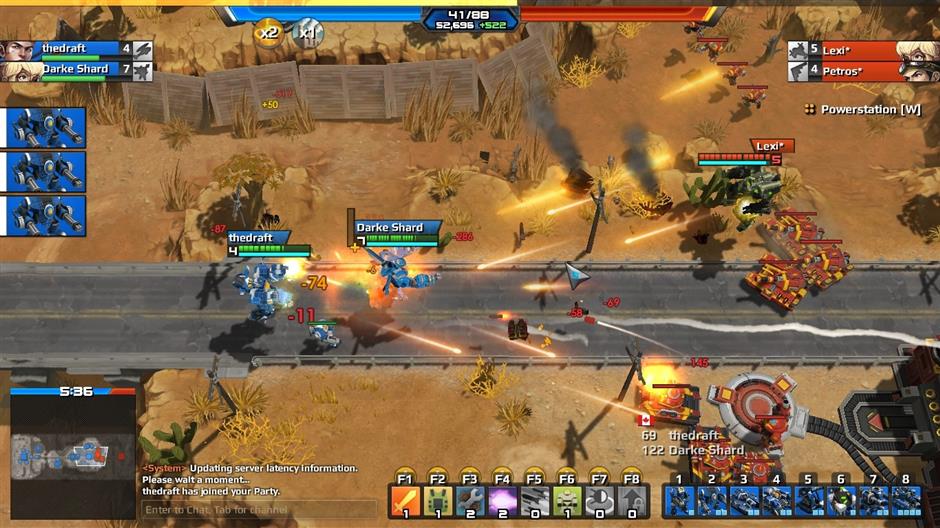 WHEN YOU NEED A JOB DONE RIGHT: Sometimes the best way to push an assault is to transform into a ground mech and start pummelling the enemy with your own guns.

You’ll often find yourself commanding troops to capture an outpost in one moment; and in the next you’re joining the ground assault, pummelling opposing tanks with your guns; and out of nowhere you’re in an aerial dogfight with an enemy mech; and then suddenly you’re rushing off to a friendly outpost to repair and refuel.

It’s fast, it’s chaotic, and, if you can keep up with the pace, it’s superbly fun. What more can you ask for?

Oh, right: you can ask for more robots. We should’ve mentioned this earlier, but AirMech runs on a free-to-play model. You’ll start playing with some standard soldiers and a Striker, (an excellent all-rounder reminiscent of Macross Valkyries) but a lot of other robots need to be unlocked first. MAKE A MECH: There are nine mechs to unlock, skins to add variety and mech parts that modify stats. Happy customising!

Fortunately, most of the “strategic” purchases — from troops to mechs to parts that upgrade your stats — can be paid for in Kudos, the currency earned by playing games. You don’t have to pay a cent to enjoy AirMech. F2P: Don't worry about the F2P model — new units and mechs are unlocked using the in-game currency; the real cash currency is mostly for decorations.

Unfortunately, the deco items are really, really tempting to have, and they can only be purchased with the Diamond currency (i.e. real cash). Sure, you could argue that different mech skins isn’t worth spending actual money on, but good luck resisting the urge to customise your chaingun-wielding Warthog Mech with a paintjob that makes it look like an insane skull-faced pirate.

Speaking of which, AirMech’s a pretty well-balanced strategy game, which is impressive considering it’s still (at the time of writing) a Steam Early Access title. So technically, the game’s a Beta, but we’re more than happy to recommend AirMech as a fully developed game. (It’s had plenty of time to be polished since its initial Steam listing in 2012.) DOGFIGHT: You'll engage in aerial combat, but it won't be Top Gun-style — all aircraft can hover and rotate in position.

In fact, there are many ways to enjoy AirMech. If you prefer playing skirmishes either cooperatively with friends or as a solo player, then the game’s AI bots actually provide a really good challenge. If you want a change of pace, the game also has a Survival Mode where your giant transforming robots get to play tower defence.

Of course, there’s the PvP (player vs player) mode if that’s your cup of tea, but if you’re going for that, we’ll just have to wish you good luck. Remember how we said the game can get a bit chaotic while you’re trying to fend off enemy aircraft while trying to sneak the equivalent of a mammoth tank behind enemy lines while deploying troops to defend your outposts? That was in the context of a solo 1v1 skirmish versus a bot. ZERG RUSH: Look, tactics are nice, but sometimes victory goes to the army with the largest crapload of cheap units.

Now imagine six humans outsmarting and out-micromanaging one another in a 3v3 PvP match. As we said, we’ll wish you good luck, but we’ll be doing so from a safe distance away.

We love ourselves a good RTS, and the ability to quickly switch from ­commanding troops to personally jumping into the fray with guns ablaze really made AirMech stand out for us. The crazy pace of battles and the fairly fair F2P model only add to our ­recommendation of this game. AirMech is proof that adding giant ­transforming robots makes any kind of game at least 200% more awesome. Now, on that note, who wants to hear our pitch for a new game, Doki Doki Decepticon Dating?