The Sims 4 is still fun with plenty of tweaks, but feels somewhat empty without much innovation.

Devoted fans of The Sims spend years playing each entry, continually expanding their sims’ lives. Some have family lineages that span generations, and others hone their building skills to create iconic landmarks.

These dedicated players have worked hard building their worlds, so asking them to start over with new iteration isn’t a small request. To justify the transition, a sequel needs to provide compelling new content while building on the innovations it has already made.

This is where The Sims 4 fails. It has some interesting tweaks, but doesn’t do enough to entice players to upgrade.

It introduces some promising changes. I love that sims now multitask and naturally converse in groups. Seeing parents take their dinner upstairs to chat while kids do homework is just one example of realistic behaviour. LOOKING GOOD: A graphical overhaul makes the sims more expressive. They look the best they ever have.

Sims are also more expressive thanks to the new emotion system. New dialogue options and extra activities appear based on your sims’ emotional state; if my sim is confident, she can write a motivational book.

Some activities tied to emotions are just stupid, though. Maxis has always had a sense of humour, but being able to “pee like a champion” and “take an angry poop” doesn’t add anything.

Emotions also fluctuate too quickly during group conversations; going through three disparate moods in a flash doesn’t give you time to capitalise on any benefits (and makes you question a sim’s sanity).

Your basic needs bars are still present, but they take a backseat to the emotion system and drain slower. This gives you plenty of opportunities to socialise and build up your skills.

The career system has been revamped, and professions eventually branch into more specific aspirations, like becoming an e-sports competitor or a start-up entrepreneur.

I like that the new career system rewards you with items when you’re promoted, and how reaching certain career levels unlocks special items to purchase. GETTING AHEAD: The career system has been revamped, and professions eventually branch into more specific aspirations, like becoming an e-sports competitor or a start-up entrepreneur.

The Sims 4’s greatest achievement is the small progression throughout your activities. If your sim is a gamer, expect access to more games as you enhance that skill. Eventually, you can even unlock the option to livestream.

These clever changes don’t turn the experience on its head, but I enjoyed seeing new things open up even after I’d been playing for 20 hours.

Unfortunately, familiar problems plague The Sims 4. While the AI pathing has been improved, it still has issues. For instance, if you send sims to the refrigerator too close together, one of them abandons the task even if they’re still far away.

Dish-clearing is apparently too complicated for them, as well. I had numerous times where my sims simply couldn’t stack multiple dishes and would just put them down instead of washing them.

I felt pretty confident leaving the AI sims to their own devices, but they still need to be monitored.

Still, just letting my sims free and watching the drama unfold remains one of my favourite things. I like that a game focused on control can still have unpredictability.

My housekeeper actually dropped dead for unknown reasons while cleaning my sink. I had to mourn his death, watch the Grim Reaper take him away, and then deal with the urn. Afterward, Death hung out and watched TV with my sims. Fun stories like this are what make The Sims 4 thrive.

That being said, The Sims 3 innovated on making the world feel alive, and one of The Sims 4’s biggest disappointments is that a lot of those enhancements are gone. 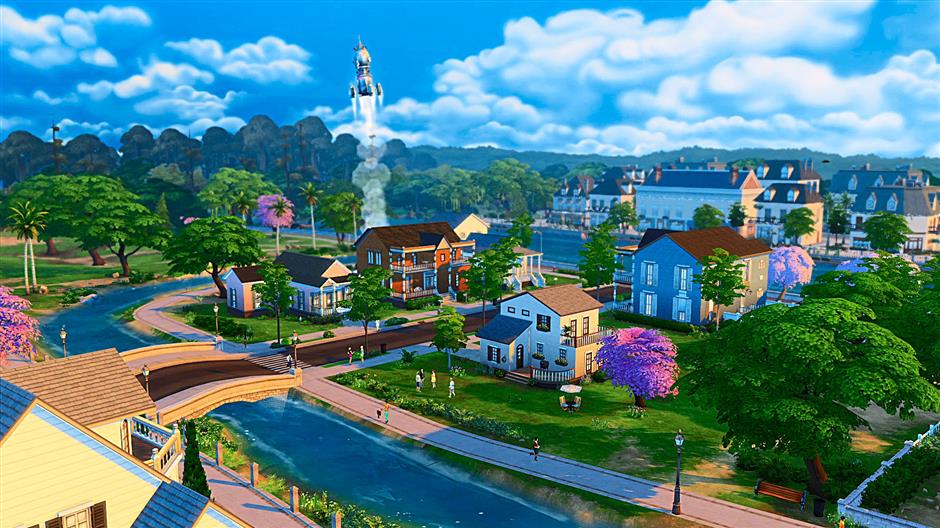 SIMPLE: The basics are easy to grasp, and you get tips along the way, but the tutorial system needs to be less intrusive.

Simple things, like not being able to walk around the neighbourhood, broke the immersion for me. The absence of the toddler stage makes it feel like your kids grow up too fast.

The recreational lots are the most affected; you can travel between different neighbourhoods, but these barren locales don’t have much to do in them.

You can fish and take your kids on the new playground equipment, but most of the activities can be done from your home, like grilling or playing chess. This doesn’t give you much reason to leave the house except to socialise, which makes the world feel smaller.

The Sims has always been about making your options seem endless, but here they are limited. Even when making your sim with the improved creator, the outfits only have a few colour variations.

Builders are even affected, as basements ceased to exist and there aren’t many options for carpets or wallpapers. I like that the building tools are more accessible and provide less room for failure, but the minimal options restrict how far you can take your creativity.

I have no doubt that, like every other Sims title, this one will continue to grow with future expansions, but that doesn’t do players any good right now.

The Sims 4 needs to stand on its own. With all of the steps back from the baseline established by the previous game, it doesn’t. I feel like I’m playing a game that’s half-baked.