Nikon shrinks the size of its mid-range DSLR and adds a few very useful features.

Nikon has been introducing DSLRs at a fairly steady pace, releasing the D810, then the D750 and now the D5500.

The D5500 is the mid-range model in the lineup and is different from the lot, simply because the camera comes with a fully articulating touchscreen, which also necessitates having a button layout that’s different from any other Nikon camera. COMMAND WHEEL: One noticeable change is in the command dial – unlike the D5300, the D5500’s is exposed.

I admit I am not a fan of the D5500's predecessor, the D5300. While it’s a great camera in terms of image quality and features, the unusual button layout meant that I couldn't use it as a second camera body as I would have to perform a mental realignment every time I switched from my main camera to the D5300.

However, with the D5500, Nikon has greatly improved the functionality of the D5000 series by including a touchscreen monitor.

This alone makes the camera much easier to navigate as you now have the option of just touching the screen to access many of the functions.

However, that's not all that makes the D5500 a great camera as you'll see in this review.

Out of the box, the first thing you'll notice is the how amazingly small the D5500 is – it's really significantly smaller than the D5300, which is quite a feat, as the D5300 was already a very small camera.

In fact, it's so small (especially with the new collapsible 18-55mm kit lens) that it's not much larger than a mirrorless Micro Four Thirds camera. SMALLER LENS: The Nikon D5500 with the 18-55mm collapsible kit lens. The button on the lens allows you to twist the zoom ring into its fully closed position.

Nikon managed to do this by having a carbon-fibre reinforced polycarbonate monocoque body onto which components are bolted onto. On previous cameras, the components were fitted onto an inner metal frame which was then covered by a polycarbonate body.

You'd think that shrinking the camera body would also consequently mean that the D5500 gives up something in ergonomics – not so, and in fact, Nikon has redesigned the grip on the D5500 to make it a lot nicer to hold.

I have small hands, so it feels good to me, but I've passed the camera to quite a few people at the office and all of them say that the D5500 feels really nice in the hands.

Kudos to Nikon for improving the grip and I hope that this design carries forward into future Nikon DSLRs.

Nikon has (finally) added an eye sensor so that the screen on the back turns off when you bring your eye up to the optical viewfinder. This feature has been available on a lot of cameras for awhile now and it's certainly high time that the company incorporated it into its DSLRs.

Of course, the biggest feature of the D5500 is the touchscreen. Again, Nikon is very late to the game, but this addition really makes the camera a lot more usable. 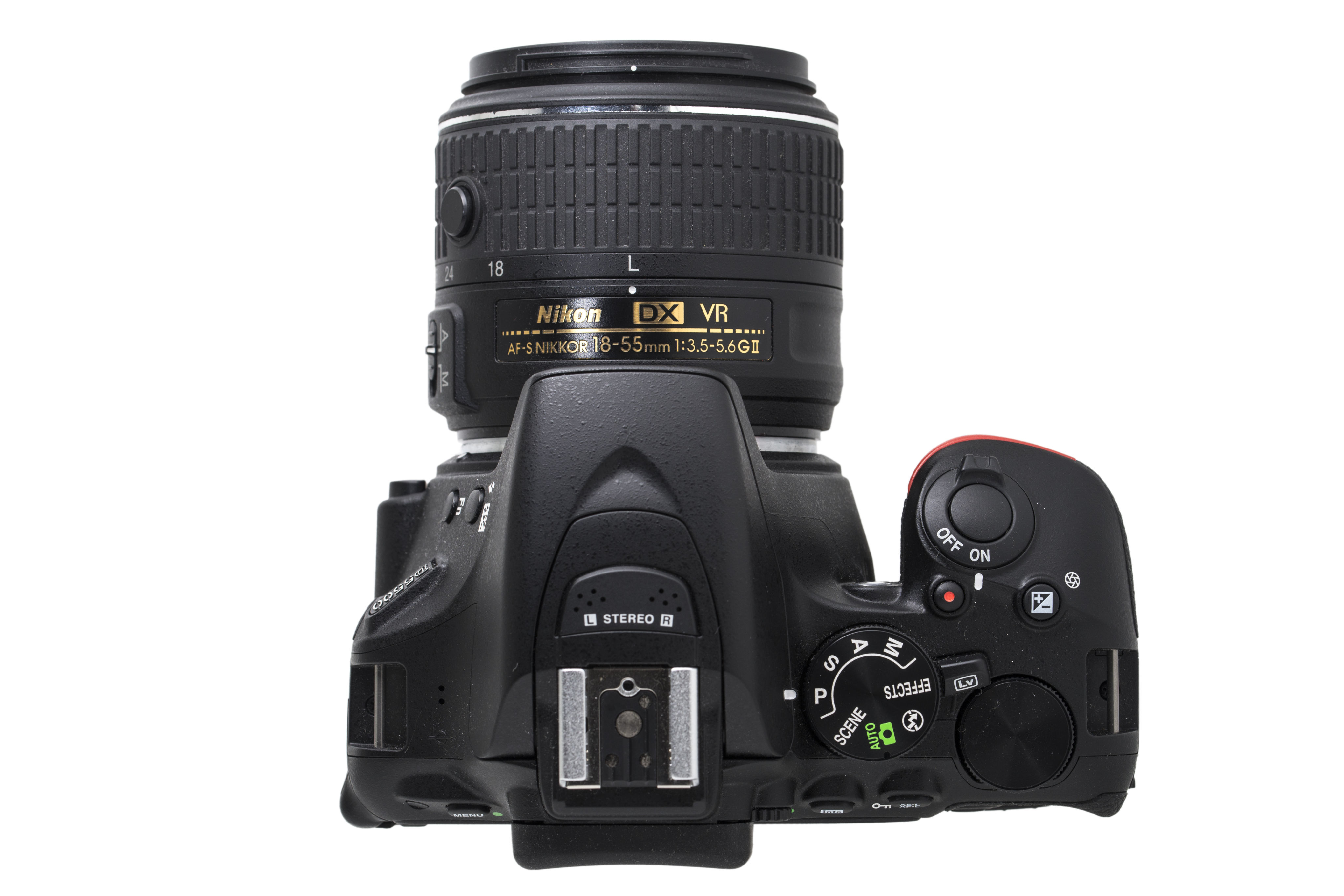 SIMILAR BUT DIFFERENT: The control layout of the Nikon D5500 will be familiar to users of previous D5000 series cameras but its still not quite the same as on any other Nikon DSLR.

With the touchscreen, you get all the usual features: you can touch and flick to navigate the menu system and you can touch to focus (and snap a photo) in Live View mode.

One very cool feature that the touchscreen allows you to do, however, happens when you bring the camera up to your eye. When you are viewing through the optical viewfinder (and the screen on the back is off), touching and swiping on the screen will actually allow you to move between any one of the 39 focus points in the viewfinder.

This actually works very well, although sometimes the AF points switches because my nose touches the screen but you can turn off this feature if it bothers you, but I found it useful enough to leave it on. CONTROLS: Despite the shrinking of the body size over the D5300, the D5500 control layout remains largely the same.

The LCD has also been trimmed down in thickness but thankfully Nikon has kept the full articulation which allows the monitor to be flipped in almost any orientation, including facing forwards for selfies.

As mentioned before, the 18-55mm f/3.5-5.6 kit lens is of a newer design that's been appearing on other entry-level Nikon DSLRs and it's small. When fully collapsed to the closed position, it's actually only about as big as a snooker ball.

Apart from these changes, the control layout on the D5500 is very similar to the one on the D5300.

In the couple of weeks that I had the D5500, I really had a blast using it – it's small, comfortable to hold, and very light so I never felt like it was a chore to carry the camera around.

Focus is pretty fast when using the optical viewfinder and the 39 phase detect autofocus points on this APS-C camera is similar to the one found on the more expensive full-frame D610. The 24-megapixel APS-C sized image sensor has no optical low-pass filter, which means images are a little bit crisper than cameras with filters.

In my shooting, the D5500 produced some excellent photos with very good detail and sharpness.

In tricky lighting situations (like when there is strong backlighting), the camera tends to overexpose slightly and I found myself having to dial in -0.5EV or -1EV of exposure compensation whenever this happens.

ISO performance was really good, as I could easily shoot from ISO 100 to 800 without any problems, while ISO 1600 still produces very usable shots.

STAY FOCUSED: The removal of the optical low-pass filter allows the camera to capture a little more detail.

It's still okay at ISO 3200 although there’s visible noise and only at ISO 6400 and up does the camera show some loss of detail due to noise reduction.

Battery life is actually better than the D5300 even though both cameras share the same battery.

The camera is rated for about 800 shots, and in practice I got about 500 shots or so before the battery ran out and the camera refused to let me continue shooting.

It's not the best battery life for a camera, but it's actually a lot better than the D5300 which generally demanded that I charge after about 300 to 400 shots.

I really enjoyed using the D5500 – the various tweaks Nikon has made to this camera certainly aren't revolutionary, but they make the camera a lot more usable.

On top of that, the grip design is so good that it almost makes you forget you're holding a tiny camera in your hand. So is the D5500 a good buy? Well, considering that I was lukewarm on the D5300, I'm really surprised to say that I really like the D5500 and would consider it a solid buy for anyone looking for a small, capable camera.

In this segment of the market, there are a few options to choose from, but few APS-C sensor cameras offer this much in so small a package and that's something to seriously consider if weight and bulk is an issue for you.

Cons: Viewfinder image could be larger; battery life is good but not great.