THERE are many negative stereotypes surrounding cancer. For example, it is often seen as being incurable, and being diagnosed with cancer is considered a death sentence. Even in cases of successful treatment, survivors are often associated with physical weakness. As a result, the discussion of cancer is often considered taboo, particularly in the Asian context.

However, open discussion is needed to foster a better understanding about the nuances of cancer and treatment. Cancer is not necessarily a death sentence, and there are many possible treatments available to combat its spread within one’s body. Here are some inspirational stories about how two people overcame cancer and went on to live fulfilling lives despite their illness. A healthy and happy Giridhan Palani is driven to live his life to the fullest.

One of the goals that kept 27-year-old Giridhran Palani motivated throughout his cancer treatment was to explore the world. Since beating cancer, he has gone backpacking across Australia, the UK, and various parts of Europe. He is also planning to visit iconic landmarks such as Santorini in Greece and the sakura blossoms of Japan in the near future.

Giri, as he prefers to be called, first discovered two swollen lymph nodes during a practice physical examination as part of his studies as a medical student. He was then 20 years old. After consulting a specialist, he was diagnosed with stage 3 nasopharyngeal cancer and referred to Dr Yap Beng Khiong, a consultant clinical oncologist at Subang Jaya Medical Centre. Giri then underwent intensive treatment for seven weeks straight; this included radiation therapy on every weekday and chemotherapy every Wednesday morning.

After those seven weeks, Giri was told to take a few months off to fully recover from his treatment. Despite being a young athlete who had represented his school in the likes of football and track at the time, the treatment had drastic effects on Giri’s physical and mental health.

“My particular form of treatment left me with a few lasting effects; first of all being the lack of stamina. After such an intense week as well as two months of recuperation, I was mostly bedridden. A lot of the stamina I had built over the years disappeared overnight and I think I lost about 15-20 kgs.

“Being isolated from your friends and family made me feel alone and lost at times. I was about 20 at the time, and I had friends who were going overseas to study, some had started working, and some were even travelling the world.

“It took me a few years to accept that I would not be at the same level as my friends after treatment, because they are a year or two ahead of me in terms of studies and work experience.” Since treatment, Giri has become more relaxed and tries not to let stress get to him.

Following his treatment, Giri resolved to make the most of his second chance at life with a fresh perspective and renewed purpose. While some sacrifices had to be made, such as opting out of his pursuit of a career in medicine, every step he took was towards living his life to its fullest.

“What kept me motivated to recover was realising that this was just a very small part of life and there’s a lot more to look forward to from here on out. Thankfully, my parents had reminded me of this. They said, “This is just a year off your life. If you live up to 70 years old, that’s only one year out of that 70.”

“I took a trip to Australia a few months after my treatment where I spent a lot of time reflecting. That was meant to be like a reset for me – away from the opinions of friends and family. I started journaling as well, trying to draw up what I foresee for my own future and what I wanted to do.

“Of course, I was sad to give up medicine, especially after pursuing it for so long. But looking back, I'm more than satisfied with where my life is now in the grand scheme of things.”

Giri is grateful for the immense support from family and friends during this treatment and acknowledges how essential that support was to his swift recovery. In particular, there were two individuals who were cancer survivors whose comfort gave Giri some much-needed solidarity.

“One of the people whom I resonated with the most was my older cousin, who was diagnosed with cancer when he was 17. He was a huge role model mainly because he reaffirmed that the negative thoughts I had were normal. He would say words such as, “I had it as well” and “It’s perfectly normal that you’re going through these thoughts”.

“It was amazing that while he was going through all that, he would still offer me support. That was always so inspirational and a very positive experience for me.” Today, Ethan is a happy and chatty 10-year-old boy just like any other.

As a parent, it is natural to be worried about your child’s well-being. However, Mary Anne had her parental anxiety taken to the extreme when her son Ethan was diagnosed with leukaemia at only three years old.

Mary Anne first noticed something was off when Ethan refused to walk, and showed signs of pain under his armpits when she tried to carry him. It was later discovered by an orthopaedic paediatrist that this was due to swollen lymph nodes around the armpit and feet caused by leukaemia.

“From there, everything happened so quickly. For the blood tests, Ethan’s white blood cell count came out really high and his haemoglobin was critically very low. He was hospitalised for the night, and the next morning, he was transported by ambulance to Subang Jaya Medical Centre. In under 24 hours, my world had completely changed.”

Today, Ethan is like any other 10-year-old boy. He is chatty and active, and has a strong fascination about space & science. To satisfy this curiosity, he often watches documentaries related to these topics. He also enjoys playing online video games during his free time.

One of the major side effects of Ethan’s cancer treatment was peripheral neuropathy, which resulted in weakness in his legs and feet. As a result, he usually moves around by tiptoeing around. However, over the past year, he has slowly begun to walk flat on his feet and even run around the house on occasion.

“As a mother, it’s very natural to want to fight for your child. With cancer, you’re thrown into this battle and you just have to deal with it. That said, Ethan was the one who always stayed cheerful throughout his treatment. Funnily enough, I think he was the one who was lifting our spirits as a family instead.

“It made me focus on the bright side of things, to look for silver linings and not fret over things too much. If there is one piece of advice I could give to families going through something similar, it would be to keep your kid happy. When the kid is happy, it lifts the atmosphere and helps the family carry on more easily.” 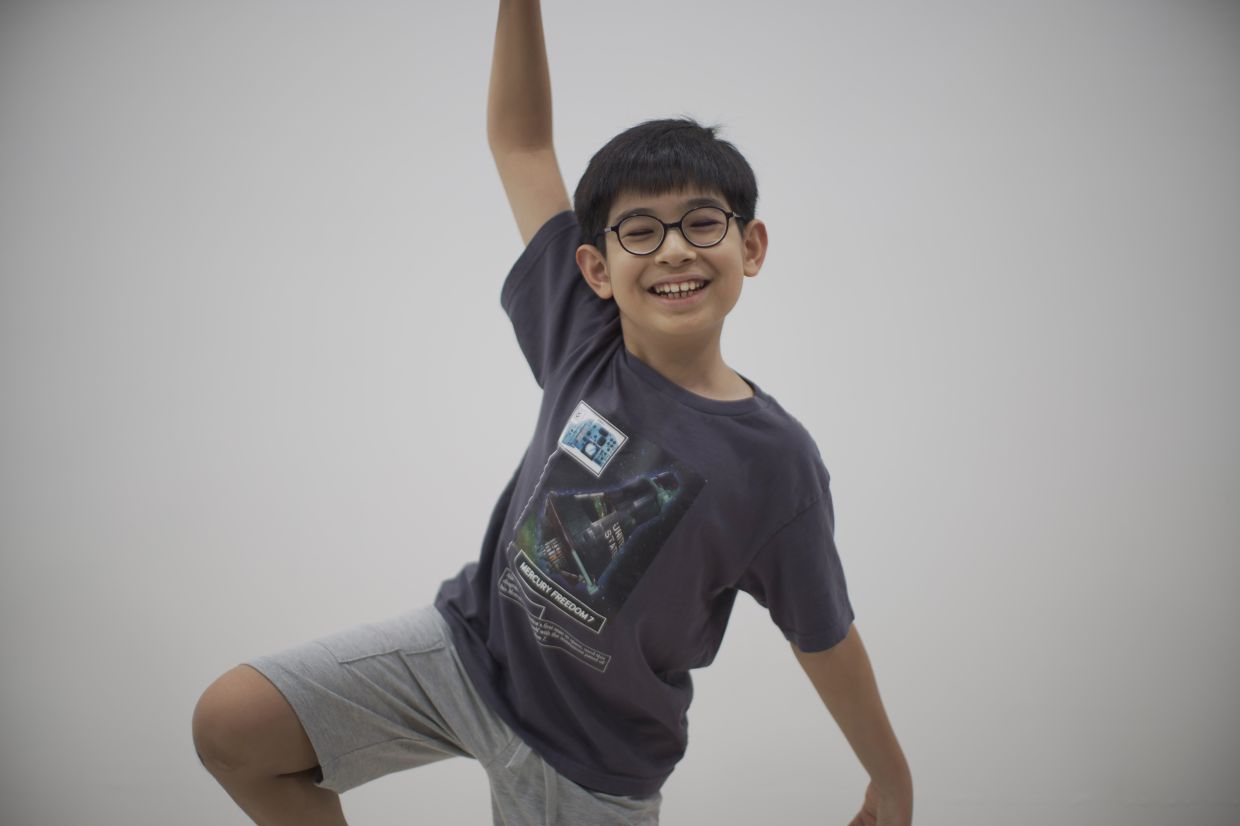 Ethan’s energetic personality was what got his family through this challenging period.

Mary Anne advocates extensively on childhood cancer in pursuit of raising awareness and dispelling the taboo in Malaysia. She also regularly works with NGOs that focus on providing support to lower-income families who are struggling with cancer, and has even started her own ‘Wishing Star’ initiative that is similar to Make-A-Wish Foundation in the United States.

“It can be very lonely sometimes, even with the best of friends. It's not that they don't want to support you, but sometimes people don’t know what to do as they don’t have enough understanding about how cancer works. When it comes to childhood cancer, it is difficult to get parents who are willing to come out to speak about their experience.

“September is Childhood Cancer Awareness month which is represented by the colour gold, but I don’t see it getting the same exposure as breast cancer awareness, for example. There needs to be more awareness, enough to let these parents know that they aren’t alone and that their kids matter as well.”