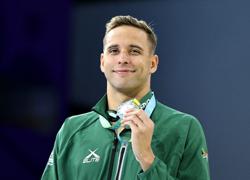 McKeon missed out on an 11th gold on Saturday when she finished 0.02sec behind Olympic champion Margaret Mac Neil in the 100m butterfly, with the Canadian setting a new Games record of 56.36sec.

But she will have other chances in Birmingham to win an 11th gold.

Scott beat England’s Dean in a thrilling men’s 200m freestyle duel, pulling away from the Olympic champion in the final 50m to win in a time of 1:45.02.

Scott, who won silver behind Dean at the Tokyo Games, was forced to withdraw from last month’s world championships in Budapest following a bout of Covid-19 but managed to turn the tables on his friend.

Australia’s Elijah Winnington, who won the 400m freestyle on Friday, was third.

Scott returned to the pool to take bronze in the 400m individual medley behind New Zealand gold medallist Lewis Clareburt, who won the race in a new Games record of 4min 8.70sec and silver medallist Brendon Smith of Australia.

Scott, who said it had been a “tough” double, added he and Dean, who usually compete together for Britain, relished their rivalry.

“It’s a really positive thing,” he said. “It’s a nice change being on different sides of the table this time. Scotland vs England. It’s always positive.”

The 2014 champion, who was disqualified from the final at the 2018 Gold Coast Games after he was deemed to have started early, said he felt unexpectedly emotional.

“Eight years ago I walked into this competition and took gold,” said the world 50m freestyle champion.

“Four years ago I felt that was taken away from me. I said to myself I’d be here four years later and that’s what’s happened.”

Another South African, Pieter Coetze, won the men’s 100m backstroke final in a time of 53.78sec.

Australia, with McKeon on the last leg, won the women’s 4x100m freestyle and rounded off the night in style by winning the men’s event.

England star Adam Peaty dominated his semi-final to qualify quickest for the final of the 100m breaststroke.

The world record-holder was forced to miss last month’s world championships in Budapest with a foot injury.

He posted a time of 59.02sec in the semi-final, nearly a second quicker than his swim in the morning heats.

Peaty said he was “fighting” his way back after his injury.

“Paris (2024 Olympic Games) is always the goal and that is the pinnacle of the sport as we all know.” — AFP 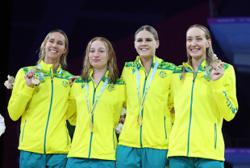 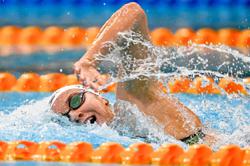