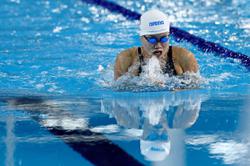 ARVIN Shaun Singh Chahal caused a sensation at the Philippines SEA Games in 2019 when he became the first Malaysian Sikh swimmer to bag a medal, and he is ready to continue from where he left off in Hanoi from tomorrow.

The 21-year-old is determined to make the podium again when he takes to the pool at the My Dinh Aquatic Centre in Hanoi this week.

“The main events I will be focusing on are the 200m individual medley as well as the 4x100m and 4x200m freestyle relays,” said Arvin, who felt he is better prepared now compared to his first outing in the Philippines.

Then, he took bronze in the 4x200m freestyle with Welson Sim, Khiew Hoe Yean and Keith Lim.

“My preparations have been different this time as I have been able to be part of a true training camp in Bukit Jalil.”“I was based in Australia for the last six years. This time, I have been able to train with coach Chris Martin and also have had support from the National Sports Institute to overcome injuries that I suffered over the past two years.

“I am hoping to win more medals for the country,” he said.

Singapore and hosts Vietnam are expected to dominate the swimming competition but Arvin is only focused on his own performance.

“I don’t really pay attention to my opponents. Swimming is a sport where it is you versus your time. It doesn’t really matter who is beside you.

“As long as you swim your best time, you have a chance to win.

Arvin is one of only four swimmers competing in Hanoi under category A. The others are Welson, Hoe Yean and woman breaststroker Phee Jinq En.