National squash player Ishant Shah (front) during one of the international junior tournaments.

PETALING JAYA: Youngster Ishant Shah Atul Kumar is one bright spark who is set to make his mark in squash.

The Penangite is already an instant hit on and off the court. Ishant, the British Junior boys' Under-17 runners-up scored 8As and 1B in the Sijil Pelajaran Malaysia (SPM) recently and is well on his way to prove that one can strike a balance between sports and studies.

Like how national icon Nicol David showed equal excellence in both areas, the 18-year-old Ishant is now looking at furthering his studies in the United States and making his mark in the professional ranks.

"I've managed to balance between studies and squash well at the junior level despite some injury issues," said the Bukit Jambul Secondary School student.

"I had slip disc and hamstring tendonitis, which hampered my progress at one stage of my playing career but in 2020, I went on to reach the British Junior Under-17 final. I've learnt to cope with it."

Ishant is only the third Malaysian after Ong Beng Hee and Ng Eain Yow to reach the boys Under-17 final in the prestigious British Open.

Ishant trains in Penang under coach Aaron Soyza together with national No. 1 women player Low Wee Wern and a bunch of others.

"I've been involved in squash since I was young but a first round defeat in the CIMB Rising Star national junior meet when I was nine years old changed everything.

"Instead of a hobby, it became a challenge for me to beat the opponent I lost to.

He then went on to win the boys' Under-11 title in the Redtone Kuala Lumpur Junior Open squash in 2013 and there was no turning back.

"My dad (Atul Kumar) used to be a former national hockey international and he introduced me to many sports but I chose squash. It's an individual sport and I like the creativity part of this game," he said.

Not wanting to be left behind as he is currently ranked 607 in the world junior professional ranking, Ishant has visualised a 10-year plan for the future.

"I'll sign up for pre-university and then pursue a scholarship to study in US and continue my professional squash career. I hope to build on it from there. With more competitive matches as a pro, I will be able to improve on my world rankings," he said. 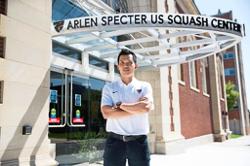