PETALING JAYA: National No. 4 squash player Addeen Idrakie admitted that experience made all the difference after he fell to Ivan Yuen in the final of the Squash Racquets Association of Malaysia (SRAM) In-House Tournament.

It was only last month that Addeen suffered a straight-set loss to Ivan in the semi-final of the National Championship.

“Ivan is a very good player and much more experienced then me. I needed to start strong as he’s a slow starter. I managed to win the first set and came close to getting the second but he managed to get his game right,” said the 26-year-old Addeen, who was the second seed.

“Despite the loss, I’m happy with my performance because my game was better.

“In our last encounter last month, I lost 3-0 but this time I managed to get one set.

“It shows that the training session after the National Championship last month is working well for me.

“I will continue working hard in training to improve.”

Addeen added that he will now prepare for the SRAM’s second In-House Tournament from Dec 9-13 which is a doubles event.

The tournament is held to make up for the SRAM PSA 1 event, which was cancelled due to the extension of the conditional movement control order.

“I’ll be competing in the men’s doubles with national juniors coach Jess Tay and in the mixed doubles with Chan Yiwen.

“We need competitions to keep ourselves sharp and I’m looking forward to seeing my progress in training,” he added. 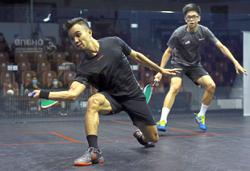