IT’S a silver and a new national record for Aznil Bidin (pic) in his second SEA Games appearance in Hanoi this time.

The 27-year-old lifted 135kg in snatch and 155kg in clean and jerk for a total of 287kg, which saw him rewriting his own total national record in the men’s 61kg category.

Aznil set the previous total national mark of 285kg in a competition in Pattaya, Thailand, in 2019.

Indonesia’s Eko Yuli Irawan, a two-time Olympic silver medallist in the category, was in unbeatable form as he cruised to gold in a total of 290kg.

Vietnam’s Nguyen Ngoc Trung got the bronze with a total of 286kg.

“I’m happy with my performance as it’s a difference of 3kg from Eko. It’s not my day because the second attempt was cancelled,” said Aznil.

“If not, maybe I got a chance to fight for the gold.

Aznil will now prepare for the Commonwealth Games in Birmingham where he will bid to defend the gold he won in Gold Coast four years ago.

Tokyo Olympics champion Hidilyn Diaz put up a solid show in the clean and jerk to beat Tanasan Sanikun of Thailand for her second straight gold in the women’s below 55kg category.

The Filipino weightlifter was trailing after the snatch category but put up a 114kg lift in the clean and jerk to overtake the Thai rival with a total of 206kg.

Tanasan, the Rio Olympic champion in 48kg, settled for silver with her total of 203kg. 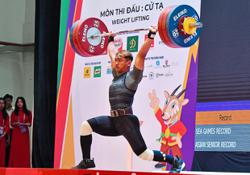