TOKYO (Reuters) - Twice Olympic champion Helen Glover's remarkable comeback kept rolling on Saturday as she advanced to the women's pairs semi-final years after having stepped away from the sport.

The 35-year-old Briton crossed the finish line with team mate Polly Swann in 7:23.98 in third place, charting once unfamiliar waters as the first mother to row for Team GB at the Olympics after giving birth to twins 18 months ago.

Bringing her children "along for the journey" back to elite sport was a major part of her inspiration, she said.

"Now they are seeing the fruits of the labour, of the (rowing machines) in the living room and the watt bike in the utility room, and lifting weights between making their dinner," said Glover, who put down her oars after the Rio Games and whose eldest child, Logan, celebrated his third birthday on Saturday.

"It makes sense a little bit. Putting all that hard work into the journey with them alongside me is key."

The three-time world champion had little doubt she and Swann, 33, a member of Britain's silver medal-winning women’s eight team in Rio, could improve in Tuesday's semi-final.

(Reporting by Amy Tennery in Tokyo; Editing by Ken Ferris) 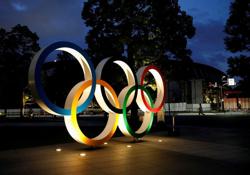