PETALING JAYA: There is a lack of knowledge among coaches on anti-doping matters.

This is the damning revelation by newly appointed Youth and Sports Minister Datuk Seri Reezal Merican Naina Merican in the wake of the International Weightlifting Federation’s (IWF) imposing a one-year suspension on the Malaysian weightlifters following a string of doping cases in 2018.

The IWF suspended Malaysian Weightlifting Federation (MWF) from taking part in any of their activities for a year beginning from April 1 as well as barring all Malaysian weightlifters from competing in next year’s Tokyo Olympic Games.

The world body had also barred Malaysians from taking part in any IWF-sponsored championships and programmes for five months until Sept 1, 2020.

Reezal wants immediate actions taken to redeem the battered image of Malaysian weightlifting in the world.

For a start, Reezal has suggested for anti-doping module be included as a mandatory syllabus in the National Coaching Academy (NCA) to educate coaches on how to prevent the use of illicit substances among athletes from recurring.

“Every coach must know and understand the World Anti-Doping Agency (WADA) code so that they can educate their athletes,” said Reezal.

“Athletes and coaches must be reminded so that this doesn’t happen again.

“I’ve also asked all sports associations, including the MWF, to forge a closer working relationship with the National Sports Council (NSC), Anti-Doping Agency of Malaysia (Adamas) and also the NSI to curb the doping menace.”

He added that it was up to the MWF to decide whether to appeal to the Court of Arbitration for Sports (CAS) to reduce the one-year suspension.

Meanwhile, MWF president Datuk Ayub Rahmat said: “We are in the midst of getting additional information as well as studying the effects and consequences before making a decision to bring this matter to CAS.

“It’s not just about costs, but also about the time and, more importantly, the federation’s image,” said Ayub.

“The doping cases were old ones and the athletes had been suspended. In fact, we even imposed a self-ban from international competitions.

“We have learned the lesson and we have been working on improving the situation. In 2019, we didn’t have a single doping case.”

“We even amended our constitution so that the state affiliates will also be held responsible for doping cases.

“In fact, we made a ruling that every state coach must get the approval from the national body before their appointments.” 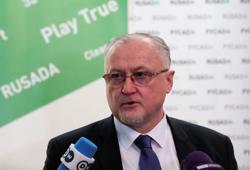