Huge loss: Several events at the Sepang International Circuit have been called off since the government’s directive to stop all sporting activities three weeks ago.

SIC chief executive officer Datuk Razlan Razali revealed they had already lost RM4 million in revenue from track fees after the government issued the directive to stop all public gatherings, including sporting events three weeks ago.

The Sepang track, first opened in 1999, is not only the home of Malaysian motorsport events but also booked for private testing and functions.

Among the events called off last month were the Asia GT official testing, Malaysia Speed Festival (MSF) and Desmo Cup.

The first and second round of Malaysia Championship Series (MCS) together with Round 1 of Malaysia Superbike Championship were also postponed to a later date.“As you know, we have already heeded the call by the authorities as we are an agency under the Youth and Sports Ministry.

“But like any business set-up, we have been greatly affected. Track fees are our bread and butter.

“We had to postpone all events scheduled last month and I believe we will not see any track activity until the end of May at the earliest, and only if things get back to normal.

“The last time I checked with my business team, we lost RM4 million in revenue and we will likely lose more the longer this situation continues as we’re not sure if the events will be rescheduled or just called off,” he said.

“We can only hope for the best and pray the situation gets better in Malaysia and the rest of the world.

“This is a global thing and affects us all.

“Participants are unable to travel because of the restrictions and fans will not show up either.

“But health is more important than anything else,” he said.
Article type: free
User access status: 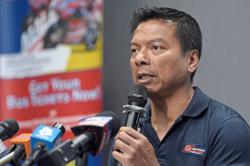 SIC to call off several major racing events because of coronavirus