Marhan can still be a marvel from the sidelines PETALING JAYA: It has been frustrating for Marhan Jalil to watch the Speedy Tigers from the sidelines but the defender has never failed to deliver strong messages to keep his teammates motivated before an international event.

Marhan, 32, will not be in action at the Nations Cup (Nov 28-Dec 4) due to a foot injury but the veteran, often referred to as “Captain Marvel”, has urged the Tigers to capture the crown despite the tough competition in Potchefstroom, South Africa.

His positive mindset was evident when he bravely announced, prior to the Asia Cup in Jakarta, that Malaysia’s aim is to go for the title and he led from the front with his tireless work rate and leadership.

Not only did Malaysia qualify for the World Cup by reaching the super four stage, they advanced to the final and narrowly lost 1-2 to South Korea in the final.

Misfortune struck when Marhan suffered a hairline fracture on his right metatarsal bone during their final friendly against France (Malaysia won 4-2) during the Tour of Belgium in early October, which forced him the miss the Sultan Azlan Shah Cup but Najmi Farizal Jazlan skippered the side to their first crown in 39 years in Ipoh.

Marhan believes Malaysia have a balanced side of youth and experience, and are shaping up nicely for the World Cup in Bhubaneswar-Rourkela from Jan 13-29.

“The team have shown tremendous improvement since the Asia Cup and despite injuries, we managed to win the Azlan Shah Cup. They should maintain this winning mentality and target to become champions at the Nations Cup.

“They must trust themselves and not fear any team although there are some players who are still young and lack international experience.

“I had to miss the Nations Cup as the doctor advised me not to take the risk. If I suffer the same injury again, I may not be able to recover in time for the World Cup.

“The young players are shaping up well and there is positive competition to be part of the squad and this is good for the team’s future.

“Although I’m not around, I believe Najmi can play his role as the captain as he also has the leadership group to back him at the Nations Cup.”

Malaysia, who arrived in Potchefstroom yesterday, will play their first match against South Korea on Monday (Nov 28).

Besides the Koreans, Malaysia have Canada and Japan for company in Group B while Group A consists of France, Ireland, South Africa and Pakistan. 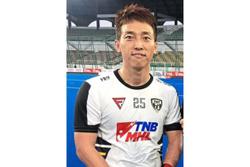