PETALING JAYA: South Korea, with their goalkeeper Kim Jae-hyeon in splendid form, showed their true colours but an Ashran Hamsani strike in the third quarter kept Malaysia’s hopes alive in the Asia Cup with a 2-2 draw in Jakarta yesterday.

Buoyed by their 5-4 win against the same opposition in the group stage, Malaysia started positively in the super four match but Jae-Hyeon’s heroics of saving four clear scoring chances turned the tide in South Korea’s favour.

Malaysia drew first blood through their top hitman Razie Rahim, who slotted in a penalty corner in the third minute.

The South Koreans, however, did not allow Malaysia to dictate the pace as they were quick on the counter attacks which resulted in goals.

The equaliser came through a penalty corner when veteran Jang Jong-hyun’s shot was deflected into goal by Lee Nam-yong in the 12th minute while another lapse by the Malaysians upfront saw the Koreans scoring a field goal through Jeong Jun-woo to take a 2-1 lead.

Malaysia battled hard in the third quarter where midfielder Faizal Saari continued playing despite suffering injuries to his left foot and left hand.

“This is a very crucial game for us and we needed to go all out, even if it means that we have to take body blows. Fortunately, we did not lose three points, we are still there,” said Faizal with a heavily bandaged left hand.

“I warned my teammates to take the positives from this game. Although I’m injured, I want to recover and play in the next match.”

Malaysia will play defending champions India today and coach A. Arulselvaraj said the Tigers could have done better in the game.

“I’m happy with the players’ positioning and ball handling but I’m disappointed with the result. The plan was not to give away penalty corners but we gave away two silly ones,” said Arulselvaraj.

“I am not questioning their effort today. The tournament is still open and we didn’t lose the point. We came back.

“Credit to our captain (Marhan Jalil) who took the initiative and overlapped in the last two quarters to create scoring chances. Every game, he is standing up and we want more players to do that.”

Malaysia will be playing India and a win will put them in the driver’s seat to claim a place in the Asia Cup final.

Meanwhile, India started their super four campaign on the winning note when they downed Japan 2-1 yesterday. 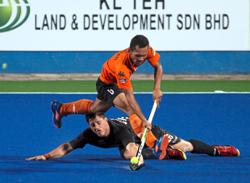