Razie: It’s not about self-glory 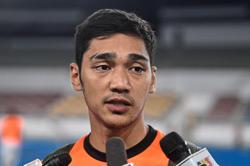 Prolific: Razie Rahim has scored five goals in the Asia Cup so far.

PETALING JAYA: Razie Rahim has been in imperious form since arriving in Jakarta but the current joint top scorer at the Asia Cup believes guiding the team to victory is more important than personal glory.

Razie has five goals to his name, four from penalty corners and one from a penalty stroke to share the top spot with Japan’s Koji Yamasaki.

Although Razie is Malaysia’s chief penalty corner taker, he refused to take full credit as he believes the responsibility is equally shared with Faizal Saari, Syed Syafiq Syed Mohd Cholan and Shahril Saabah.

Razie emphasised that it was team effort that has been making the difference in Jakarta as they book a spot in the super four stage even before their final Group B match against Bangladesh today.

Malaysia opened their campaign with a thumping 7-0 win over Oman before edging South Korea 5-4 on Tuesday.

“Our main objective here is not about the number of goals we score but to win every match. If we keep winning, qualifying for the World Cup will become easier.”

The two best teams from each group move into the super four where they will compete in a round robin format.

The top two will qualify for the Asia Cup final and also confirm their ticket to the World Cup. The remaining two will play in the third placing playoff where the winners will make it to the World Cup in Bhubaneswar, India from Jan 13-29 next year.

“That’s what I’m focused on as we go into the super four where every match will be tough,” said Razie, the most experienced player with 290 caps.

“I’m happy that I’ve scored from the penalty corners but it is not my responsibility alone. Shahril, Faizal and Syafiq can also do the job well.”

Razie is also mindful of the fact that Malaysia had conceded 11 penalty corners against South Korea.

“We need to cut it down as it adds undue pressure on us. We have to be disciplined and curb the habit of giving away too many penalty corners.”

Meanwhile, national coach A. Arulselvaraj said while the super four will be the main agenda for Malaysia, they cannot take the final group match lightly.

“We will not underestimate Bangladesh. Every match is a test and a chance to improve ourselves. We have to use every opportunity we get to progress,” said Arulselvaraj.