Cantlay stamps his mark on game 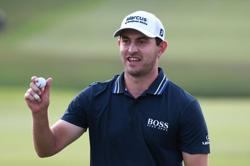 Cantlay endured and then overcame some real difficult times by way of injury and personal tragedy.

Patrick Cantlay has enjoyed his best season in the one just concluded and it is reflected in his successes that were highlighted by triumph in the FedEx Cup and Ryder Cup, and being chosen PGA Tour Player of the Year.

This was just reward for a player who turned pro in 2012 and after a promising start had to endure and then overcome some real difficult times by way of injury and personal tragedy.

The 2013 Colombia Championship on the then Web.com Tour was Cantlay’s first pro win. He made the Web.com Tour finals and his 11th place finish earned him his PGA Tour card for 2014. However, in the 2013/14 campaign he managed just five tournaments as a back injury curtailed his progress. In 2015 and 2016 he did not play at all.

The Californian-born Cantlay also had to deal with the untimely passing of his friend and caddie Chris Roth, who died in a hit-and-run car accident in February 2016.

Roth caddied for Cantlay, in both his amateur and professional careers. The two had known each other since their high school days.

But when the former number one ranked amateur in the world, did get fit and returned to the Tour after some three years, he made his presence felt in no small way.

He is a six-time winner on the PGA Tour and four of those came last season. He won the Zozo Championship by one stroke, edging out Spain’s Jon Rahm and fellow American Justin Thomas. Cantlay captured the Memorial Tournament in a playoff win over Collin Morikawa and then clinched the BMW Championship in a six-way playoff.

As if writing the script himself, Cantlay consigned Rahm to a second runner’s-up spot. This time he beat the Spaniard by a single stroke on the last day of the last tournament of the season to take the Tour Championship at East Lake in Atlanta, Georgia, which ultimately secured him the FedEx Cup.

He would then go onto make his debut on the US Ryder Cup team a couple of weeks later and emerge from that with his growing portfolio further consolidated.

The Americans thrashed Europe 19-9 and Mr Cantlay duly weighed in with 3½ points from his four matches.

As the new PGA Tour season begins to gather momentum, Cantlay’s performances will no doubt be closely scrutinised, and rightly so.

The world number four has certainly announced his arrival – and done so rather eloquently. Cantlay won the Tour Championship by a single stroke on the last day of the season to capture the FedEx Cup.

Following are excerpts of in an exclusive interview TeeUp conducted with the 29-year-old:

Q: First of all, congratulations on a brilliant season. And so, with all of this, in a nutshell how do you feel?

A: Thank you, it was great to accomplish so much on the golf course this year and the feeling is very rewarding. As long as I have played golf I have been very process oriented, with both my planning and preparation, so it’s great to see my commitment pay off in such a big way.

Q: What does winning the FedEx Cup and then being named PGA Tour Player of the Year mean to you and how do move forward from here?

A: It was a great feeling to win the BMW Championship in such a long playoff and then ultimately win the FedEx Cup the following week. The hard work from the last few months and years really, showcased during those few weeks. Being selected by my peers as the Player of the Year is a really nice honour, especially given how many other Tour players had phenomenal seasons as well.

Q: You have also broken onto the USA Team for your first Ryder Cup, another outstanding achievement in an outstanding season, what is your take on this?

A: I loved my time representing the US in Australia at the Presidents Cup in 2019. Now knowing how it feels competing during team weeks, I was so excited and happy to compete on home soil in my first Ryder Cup.

Q: Over the last 24 months or so, you really came into your own, particularly the past year, could you maybe share some thoughts on this?

A: Each year on Tour I have become more comfortable and learned how to best maximise my time and preparation. I’ve been a pretty consistent person both as a competitor and off the course which I believe have contributed largely to my success.

Q: You had an outstanding amateur career too, during which you were world number one for a record 54 weeks, perhaps you could touch on some of this?

A: I was fortunate to experience great success as an amateur and hold the number one ranking for a long period. I grew up surrounded by John Cook and other PGA Tour players at Virginia Country Club which helped elevate my game at a young age. Learning from those guys and being able to pick their brains on practice and on course strategy was extremely helpful in maturing my game while I was still young.

Q: From a personal perspective, who has been the most influential person or driving force behind your golf, even from an early age, and how?

A: My grandfather introduced me to the game as a young child. He pushed me to learn the game and proper fundamentals as I began to compete. He also introduced me to my coach Jamie Mulligan when I was about eight, who I still work with to this day.

Q: As you look forward to the season ahead now, would it be safe to say that the Majors will again stand out your agenda?

A: The Majors definitely stand out on the schedule, and yes, isn’t unique to this year. I love competing on the biggest stage and the Majors certainly provide that. I will stick to my everyday process and show up those weeks prepared and ready to compete.

Q: What sort of role do your sponsor partners play and how important are they to your game, and career?

A: My partners have been extremely important to my career from the day I turned professional. They all play an important role in my success. In particular, apparel partners are massively important given that clothing is an extension of equipment. Hugo Boss gives me the freedom to be comfortable and look good both on and off the golf course.

Q: You’ve recently acquired the nickname “Patty Ice”, share with us more on this?

A: I got a kick out of it, hearing it more and more from the fans during the BMW Championship. I think it hints to my on-course demeanor in a subtle way and I think it’s here to stay, which is great.

Q: Lastly, what sort of message could you share with young and aspiring golfers, and those who are thinking about joining the sport of golf?

A: Golf is a sport that holds you accountable and teaches you just as much off the course as it does on. The best message I could share for juniors or anyone looking to start playing the game is to take the first step in learning the fundamentals and be willing to put in the work!