KOHLER, Wisconsin (Reuters) - The Europe and the United States Ryder Cup captains shuffled their lineups from the morning foursomes for the afternoon fourballs on Friday, making sure everyone on their 12-man teams saw action on the opening day at Whistling Straits.

Despite dominating the foursomes matches 3-1 U.S. captain Steve Stricker chose to shake up his pairings by sending out Dustin Johnson and Olympic champion Xander Schauffele to face Britain's Paul Casey and Ryder Cup newcomer Austrian Bernd Wiesberger, who sat out the morning session.

Johnson had partnered Collin Morikawa and Schauffele teamed with Patrick Cantlay in the morning, winning their foursome contests to help take the U.S. to a 3-1 lead.

Following that group onto a sun-kissed links style layout will be big-hitting Bryson DeChambeau and Scottie Scheffler who will both be seeing their first action here going against Spanish world number one Jon Rahm and Britain's Tyrrell Hatton.

Tony Finau and Harris English, who also sat out the morning session for the U.S., will take on Northern Irishman Rory McIlroy and Ireland's Shane Lowry.

Last off will be Justin Thomas and Patrick Cantlay who will battle Briton Tommy Fleetwood and Norwegian Viktor Hovland. 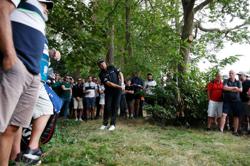