(Reuters) - Former United States captain Paul Azinger has questioned Brooks Koepka's commitment to the Ryder Cup after the four-times major winner described the biennial event as "a bit odd" and said he might not be cut out for team sports.

In an interview with Golf Digest this week, Koepka said the team event pitting the United States against Europe threw his regular routine off and it was tough dealing with distractions such as photo opportunities, meetings and team building.

"You go from an individual sport all the time to a team sport one week a year," he added. "It's so far from my normal routine. I can barely see my (personal) team. It's hard to even go to the gym."

The 31-year-old, who is still recovering from a wrist injury that forced him out of the Tour Championship, said there was no time to decompress at the Ryder Cup.

"It's more demanding than I'm used to, and there's a lot of emotion there, so by Sunday, you're just dead."

Koepka added that while he would love to represent his country at the Olympics, it was "just maybe not in my DNA, the team sports thing."

The comments did not go down well with Azinger, who works as an analyst for NBC.

"After reading that, I'm not sure Brooks loves the Ryder Cup that much and if he doesn't love it he should relinquish his spot and get people there who do love the Ryder Cup," said Azinger, who led the United States to victory at Valhalla in 2008.

"Not everyone embraces it, but if you aren't sold on it then I think Brooks should consider whether or not he really wants to be there."

Azinger is also concerned about the effect of his well-documented feud with Bryson DeChambeau on team morale.

"When you add the Bryson dynamic, that would make the decision easier for (Koepka)," he said.

"Brooks is one of the most honest, candid guys and if he is blatantly honest with himself and if he doesn't want to be there, he should come out and say it."

The Ryder Cup, postponed last year because of the COVID-19 pandemic, will be played from Sept. 24-26 at Whistling Straits in Wisconsin. Europe are defending champions after winning at Le Golf National near Paris in 2018. 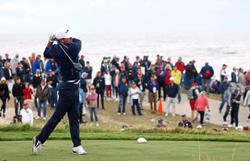