Not much change in standings

Marcus Lim climbed 11 places up the rankings this week.

THERE were no significant changes in the standings for Malaysia’s men and women in the World Amateur Golf Ranking system this week.

However, in the men’s section the country’s top six placed golfer all moved up the ladder and each of them by more than 20 spots, apart from the two leading players, top-ranked Marcus Lim Pang Chuen and Ervin Chang, who climbed 11 an 18 places, respectively.

The rankings change, sometimes dramatically, even if some of the players are inactive that week. This is because of the rolling format employed by the R&A and the United States Golf Association (USGA), the two world governing bodies who oversee the rankings.

Indeed, the men’s and women’s World Amateur Golf Ranking system ranks the top male and female amateur golfers on the basis of their average performance in Counting Events over a rolling cycle of the previous 104 weeks.

Marcus, based at Sacred Heart University in Connecticut, US, but on a brief visit home at the moment, rose to become Malaysia’s number one ranked men’s player in April.

He replaced Ervin Chang at the top, with latter slipping to second in the country standings, and with his 11 places gained this week, he improved his career best 242. 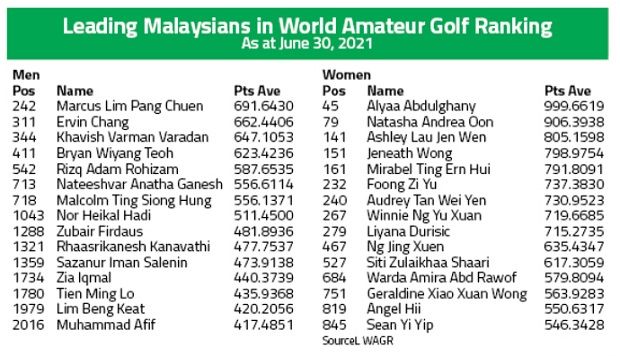 Khavish Varman Varadan, the third ranked Malaysian at 344 (another career-best) on the World Amateur Golf Ranking, shot up 28 places, while Bryan Wiyang Teoh climbed to 411th after gaining 22 spots.

Rizq Adam Rohizam moved to 542nd with his 20 places gained and Nateeshvar Anatha Ganesh is now at 713th after he moved up 25 spots in this week’s standings. In the women’s standings, Alyaa Abdulghany remains Malaysia’s best-placed player. However, she did stumble three placed down to 45th in the world.

Alyaa’s best has been 24th, which was highlighted by her reaching the semi-finals of the 2020 US Women’s Amateur Championship at Woodmont Country Club in Rockville, Maryland.

Natasha Andrea Oon, retained her 79th place in the amateur global rakings, while Ashley Lau Jen Wen moved up eight slots to 141st, to round out Malaysia’s top-three.

Jeneath Wong, the biggest mover this year in the Malaysian women’s standings, climbed to a personal best 151st.

The Australian-based player has benefitted immensely from being able to play in a few events and show good form at it.

In her six competitions Down Under this year alone, she has posted top-10s in each of them. Three of those have been marked by victories, another by a runner-up finish, to add a fourth place and seventh place.

For good measure, in her last three Counting events of 2020, she had two wins and an eight lace finish.

Mirabel Ting Ern Hui at 161st is the fifth ranked Malaysian in the women’s section.