Eventful developments for the sport

South Korean Cho A-yean in action at at the 42nd KLPGA Championship this week.

IN many respects it has been an interesting and also welcome week in the world of golf.

Indeed, it has been one that has had several narratives that really got the industry’s spirits lifted amidst the grave concerns borne of the Covid-19 pandemic.

Among the key factors here was the return of competitive pro golf in the form of the Korean LPGA Tour, the scheduling of a couple of top-class charity matches featuring world number one Rory McIlroy and Tiger Woods, the US PGA Tour outlining the mechanics of how they intending restarting their own season and the European Tour doing the same.

The KLPGA Championship, which began on Thursday and is due to be completed today, is widely been viewed as a test-case for the return of pro golf proper.

The protocols adopted are those which organisers believe will get the competitive game going again and notably include the absence of spectators.

The new rules also have the players required to “wear masks before and after their rounds” with an option of wearing them during the game, while caddies have to “wear masks on and off the course”.

Park said she felt it was “a little boring, yet refreshing”.

Kim said that “it felt more like a practice round” but hastened to add that they were just “thankful to able to play again”.

And therein lies the one thing that tips the scales. The tournament is being screened live on Astro today (12noon to 5pm).

The TaylorMade Driving Relief charity match at Seminole Golf Club in Florida, pencilled in for tomorrow morning (2am-6am, Malaysian time), will have McIlroy team up with Dustin Johnson against Rickie Fowler and Matthew Wolff, both from Oklahoma State.

It’s a team skins match that will see each player play his own ball, with each team counting the lower score between the two on each hole. 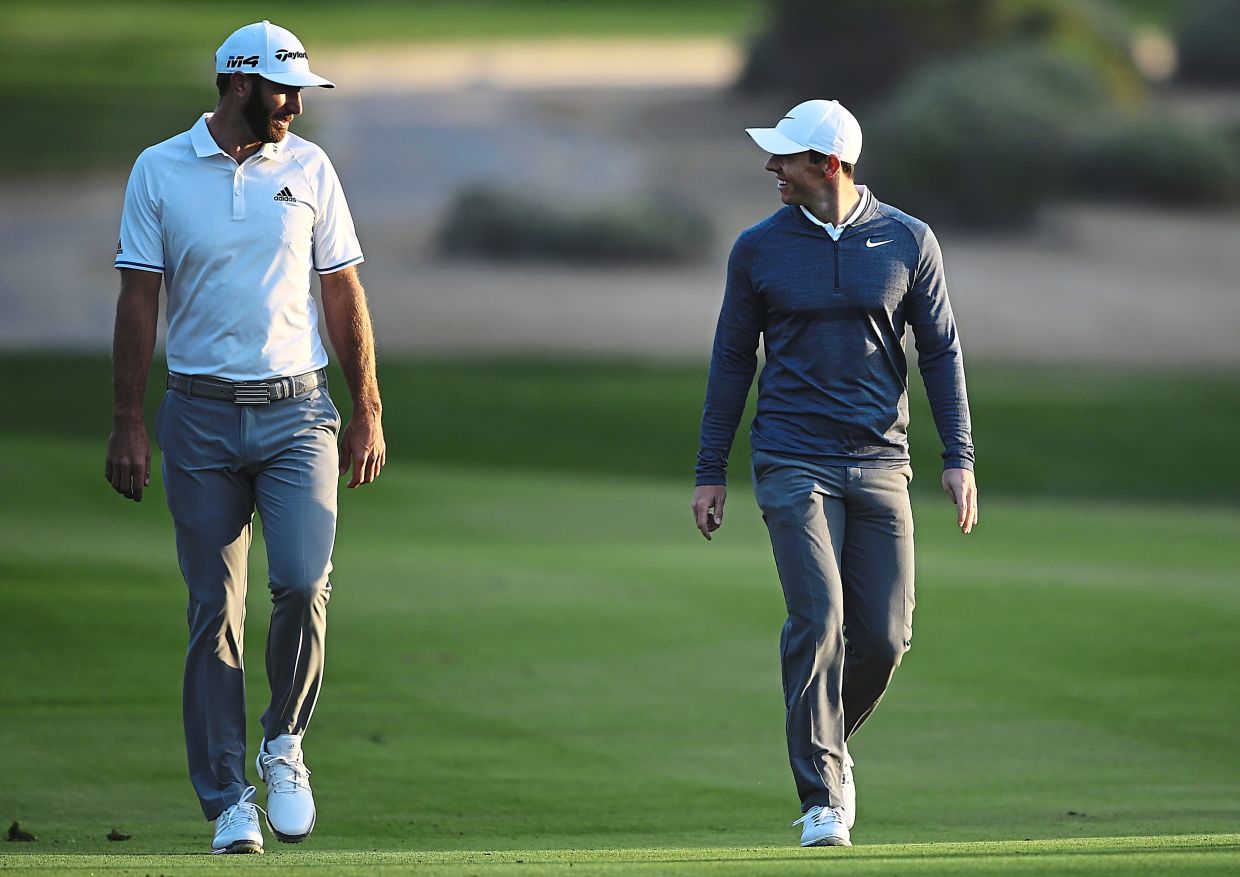 Dustin Johnson (left) and Rory McIlroy will be partners in the team event.

The event will have both teams handed $500,000 apiece and in the event of any ties, the “dollar values will carry over from hole to hole”.

If things are still even after that, there will be a playoff. All the funds will be later handed over to charities - the American Nurses Foundation, if McIlroy and Johnson win, and the US CDC Foundation if Fowler and Wolff win.

The Champions for Charity that will have Woods play alongside Peyton Manning against Mickelson and Tom Brady is scheduled for Medalist Golf Club in Hobe South, Florida next weekend and will also be broadcast on television.

Woods and Mickelson, the biggest draw-cards of their generation, are featured with American football quarterback legends in a showdown that is also expected to generate millions of dollars for charity.

It also comes after Mickelson beat Woods in US$9mil winner-take-all match in Las Vegas in 2018.

In this one, Woods and Manning have been tipped to topple Mickelson and Brady, just as McIlroy and Johnson are favoured to beat Fowler and Wolff.

Following his exploits in the TaylorMade Driving Relief match, McIlroy has indicated that he plans to play in the first three events when the PGA Tour return to the fold.

If things go according to plan, he will play in the Charles Schwab Challenge from June 11 to 14, the RBC Heritage from June 18 to 21 and the Travelers Championship from June 25 to 28 - all regular events on the circuit.

Speaking to Golf Channel, he said: “I guess I can’t speak for everyone, but for me personally, I just want to get back out and play. So that’s my plan, play the first three. I think it’ll be nice to get back out there and play.”

If the European Tour get their way, they will have four tournaments on the trot in England. These would be the British Masters in Newcastle-upon-Tyne from July 30 to Aug 2, the Scottish Open in North Berwick from July 9-12, the BMW PGA Championship in Surrey from Sept 10 to 13 and Alfred Dunhill Links Championship in Kingsbarns, Scotland from Oct 1-4.

We all hope things continue to improve, both on and off the course. And, we shouldn’t forget those who have fallen victim to Covid-19 nor those on the front-lines, combating this scourge – and it is them whom we salute.