Stress-free: Marcus Fraser of Australia reacts before putting at hole seven during the first round of the Maybank Championship yesterday.

SHAH ALAM: Australian Marcus Fraser is competing in only his fifth tournament in the first three months – two less during the same period last year – and calls himself a 'part-time' golfer.

And playing with a more relaxed mindset seemed to be working wonders for the 40-year-old as he shot a seven-under 65 to grab a share of the opening round lead of the US$3mil (RM12.23mil) Maybank Championship yesterday.

Fraser, who won the inaugural edition in 2016, was sizzling at the Saujana Golf and Country Club when he mixed eight birdies with a bogey to tie for top spot with Spaniard Nacho Elvira.

Austrian Matthias Schwab, Thailand's Jazz Janewattananond and Angelo Que of the Philippines were among the three players bunched in third place after carding matching 66s.

Fraser was surprised by his fine start.

"It's been a good day. Played steady all day and putted really well," said Fraser, a three-time European Tour winner.

"I was more surprised than anyone going out there and shooting seven-under!

"I've been playing well having a hit (practice) at home, but I haven't played a whole lot of competitive golf. It was nice to go out and play well in a great tournament.

"I'm definitely a part-time golfer these days. It's nice to go out on the golf course and it doesn't mean as much as it used to. I think when you've got that mindset it probably helps."

Fraser will want to build on the solid start as he has gone three years without a win since he last captured the Maybank Championship, then at the Royal Selangor Golf Club.

Sharing the same ambition is none other than Elvira, who's still seeking a breakthrough on the European Tour.

The 32-year-old, fresh off his joint second finish at the Qatar Masters two weeks ago, is knocking on the door again by carding eight birdies to offset a bogey.

"To be honest, seven-under is always good. With my record here not being too great, 65 is very good," said Elvira, who missed the cut in his last two visits.

"I'm happy the way things are going, happy to be turning around my golf game a little bit. We'll see where that gets me."

Defending champion Shubhankar Sharma of India failed to get off to an inspiring start, battling to a 71 to be joint 41st, while 2017 champion Fabrizio Zanotti of Paraguay shared 63rd on 72. 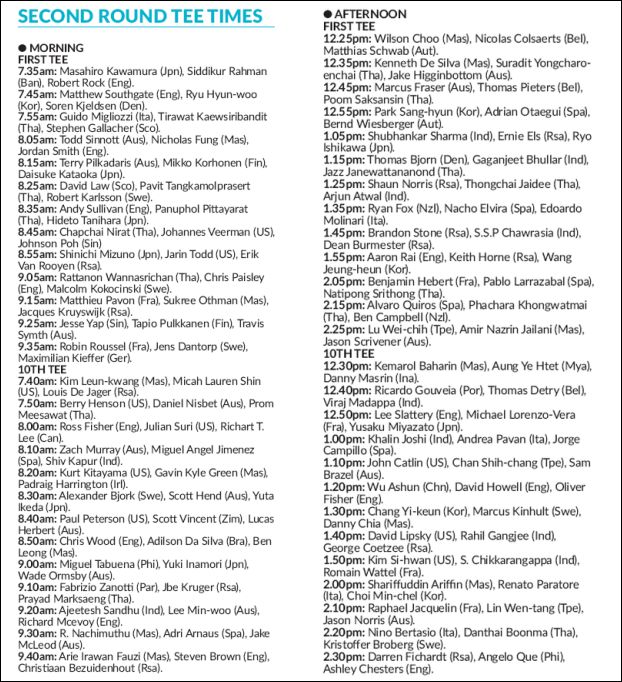 ‘Human Highlighter’ in the limelight

Arjun ready to play ‘awesome golf’ with partner Kiradech
Jeneath to stake her claim for a spot in SEA Games squad
Ashley joins group of collegiate winners in the US
Eyes on Major No. 4
Golf-Catlin beats Kieffer in playoff to win Austrian Open
Kelly finishes tied 22nd in Lotte Championship
Kelly keeps up the momentum with near-flawless round in Hawaii
Masters win was magnificent
In-form Patty set for Singapore
Practice, practice, practice