PETALING JAYA: Inspirational Selangor stalwart Brendan Gan has received a boost in his comeback bid to the national team when he was named by head coach Kim Pan-gon as one of the four joint captains for the upcoming Asean Football Federation (AFF) Cup.

The Football Association of Malaysia (FAM), in a statement yesterday, announced that Pan-gon picked Brendan and Mohd Faisal Halim to be captains for the national team, together with Dion Cools and Safawi Rasid.

The 34-year-old Brendan, who has survived cancer and two anterior cruciate ligament injuries, skippered Selangor to a gallant campaign in the Malaysia Cup where they reached the final before losing 1-2 to Johor Darul Ta’zim (JDT) on Sunday.

Four to the fore: The four captains in the Malaysian football team are Brendan Gan (above) and from left Safawi Rasid, Dion Cools and Mohd Faisal Halim

Brendan was out for a year to get treatment for early stage testicular cancer and only made his comeback to top-flight action in June this year.

“Dion, Safawi and Syafiq Ahmad of JDT were joint skippers during the 48th King’s Cup 2022 in Chiang Mai, Thailand, in September.

“But, with Syafiq absent from the centralised training camp this time, Brendan and Faisal have been named as his replacement,” added the statement.

Syafiq was among 11 JDT players who could not join the Harimau Malaya side for the training camp this time due to personal matters, family commitments and injuries.

Meanwhile, Pan-gon will only reveal his target for the AFF Cup after reviewing the performance of the squad from the two friendly matches against Cambodia and Maldives on Dec 9 and 14 respectively.

With Kuala Lumpur players Declan Lambert and Akram Mahinan declining to join due to personal reasons, Pan-gon will have 28 players to choose from.

The AFF Cup is scheduled to kick off on Dec 20, two days after the conclusion of the World Cup in Qatar and will run until Jan 16.

Malaysia failed to reach the semi-finals in last year’s edition and that led to the resignation of head coach Tan Cheng Hoe. 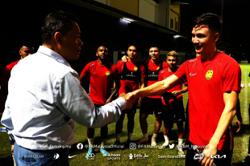