Coach Asri currently happy with Mousedeer in his care PETALING JAYA: It looks like Melaka will not dip their hands in the second transfer window to bolster their squad for the remainder of the Super League campaign.

The Mousedeer believe the talent and quality they have at their disposal is enough to sustain a strong challenge in the top division.

Interim coach Asri Ninggal said he has had no issues with the players’ performance and commitment since he took over.

Melaka are currently ninth with seven points from six games.

He believes when the league resumes after the international break, they can further improve on their standings.

“We are back to training and will arrange some friendlies before we resume our campaign against Negri Sembilan at home. As for personnel changes, I do not see it happening at the moment,” he said.

“But we will see how it goes because the window is up to June 24.

“Right now, I cannot fault the boys I have at the moment. They have been good.

“When I took over, the boys made sure that we found some momentum.

Asri took over from Risto Vidakovic in April and admits the challenge ahead will be much tougher, especially when they face Negri at the Hang Jebat Stadium on June 18.

Negri are currently third with 15 points from eight matches.

But he knows the boys are in the mood to continue their winning momentum after the break.

“We will be facing tougher oppositions from now on.

“We will face Negri, then Sarawak United, Johor Darul Ta’zim and then Selangor.

“The gap between these games is short.

“It won’t be easy, and who knows, they might make some changes or two to their squad.

“So my boys have to be truly ready for these challenges.” 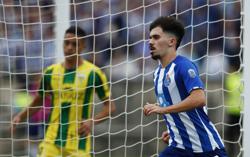