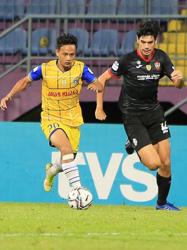 PETALING JAYA: With 14 players over 30 years of age, Sarawak United have the oldest squad in the Malaysia Cup competition.

But their Nigerian striker Uche Agba, who is 35, showed he isn’t too old for some spectacular acrobatics in their shock Group A opening win over Penang at the City Stadium in Georgetown.

Agba scored what could be the goal of the season when he connected with an overhead kick off Tommy Mawat Bada’s cross in the 47th minute to give Sarawak the lead in their 3-1 win.

Khair Jones added a second for the Crocodiles in the 54th minute before winger Al-Hafiz Harun pulled one back for Penang two minutes later.

But the night belonged to the exciting Agba, who completed his brace in the 58th minute to secure three points for the Premier League runners-up.

An elated Agba was excited to talk about his wonder goal.

“As a striker, it’s all about instinct and decisions,” said the former Police and Melaka player.

“The cross came in from a distance and that was my instant decision.

“It’s indeed a goal to remember, more so against a very good team.”

He was also quick to salute his teammates who played their parts effectively.

“Everyone was willing to go the extra mile. I had a good time on the pitch, looking out for spaces to exploit.

“But it wasn’t easy, as the rain affected both teams and we tried as much as possible to minimise our mistakes especially in the middle. We also kept our play simple.”

As for defying his advancing age, Agba said that it was a player’s professionalism on and off the pitch that determines how long he would last in this career.

“I still have more to give and will keep giving and enjoying it.”