(Reuters) - Daniel Maldini said it was emotional to score his first AC Milan goal on his first start for the Italian club in a 2-1 win over Spezia on Saturday, following in the footsteps of his father Paolo and grandfather Cesare.

Italian media said it was the first time three generations of the same family have started in Serie A, with Paolo Maldini's last goal coming in 2008 and Cesare's in 1961.

The 19-year-old was named in Stefano Pioli's starting line-up and opened the scoring after 48 minutes with a powerful header to send Milan on the way to a victory that sent them top of the standings.

"It was a very strong emotion," Maldini told DAZN.

"Today I was quite emotional, but calm. Luckily we took the three points home, even though it was tough.

"The coach told me yesterday that I was going to play, but I was relaxed. It is difficult to find spaces on the pitch, to move around and create chances. But in the second half a bit more space opened up."

Paolo and Cesare were both defenders and enjoyed hugely successful playing careers with Milan.

Cesare joined Milan from Triestina in 1954 and went on to captain the club, winning Serie A four times and the European Cup in 1963, before later returning as manager and leading Milan to the Coppa Italia and European Cup Winners' Cup in 1973.

Paolo, widely considered one of the greatest defenders of all time, spent his entire career with the Rossoneri and captained the club during a glittering period of success, winning seven Serie A titles and five European Cup/Champions League trophies among other honours.

Now working as a technical director for Milan, he was in the stands at the Stadio Alberto Picco to celebrate his son's milestone.

"Dad is demanding, but he gives me advice and helps me," said Daniel Maldini. 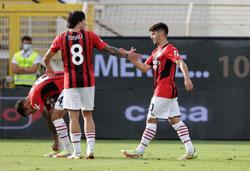