COPENHAGEN: Sweden striker Marcus Berg was subjected to abuse on social media after missing an open goal in his side’s scoreless draw with Spain at Euro 2020, prompting his teammates to publicly back him.

Many abusive comments were posted below pictures on the 34-year-old’s Instagram account after he skied a second-half shot over the bar with the goal at his mercy before being substituted along with Alexander Isak who set up the chance.

“It’s so ridiculous, I’m not even going to invest energy in it. I and everyone else in the team knows how important ‘Mackan’ (Berg) is for the team,” goalkeeper Robin Olsen told reporters.

“It’s incredibly low to be carrying on like that. He knows that I and the rest of the team have his back,” he added.

Former Sweden captain Andreas Granqvist posted a picture on Instagram of himself and Berg embracing with the caption: “KING @marcusberg.9. I stand behind you always.”

At the 2018 World Cup, the Swedes made a public stand against racism when winger Jimmy Durmaz was subjected to a similar stream of abuse for conceding a free kick against Germany which their opponents scored from.

Swedish team press officer Jakob Kakembo Andersson said the country’s FA would monitor the comments and report threats and abuse to the police if they deemed it necessary. — Reuters 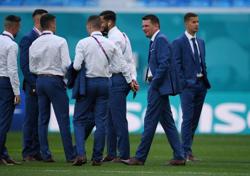