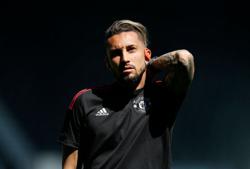 (Reuters) - Manchester United skipper Harry Maguire is set to miss Tuesday's Premier League meeting with his former side Leicester City as he waits to discover the full extent of the ankle injury he suffered at the weekend, the Old Trafford club said on Monday.

Maguire, who has been ever-present in United's defence this season starting all 34 of the second-placed outfit's league matches, sustained the problem after landing awkwardly during Sunday's 3-1 victory over Aston Villa.

United are grappling with a busy fixture schedule and face Liverpool in a rescheduled match on Thursday.

Manager Ole Gunnar Solskjaer said he would ring in the changes against fourth-placed Leicester with several of the club's academy players set to feature.

"They're training with us every day so... some of the young boys will get an appearance," he said on Monday. "If it's coming on towards the end or starting I don't know because I don't know how the players will be on Tuesday.

United said on their website https://www.manutd.com/en/news/detail/team-news-for-man-united-v-leicester-11-may-2021?utm_source=web_notification&utm_medium=notification&utm_campaign=muwebsite&utm_content=Team%20news%20for%20Leicester%20h that winger Daniel James is doubtful and forward Anthony Martial is also unlikely to play.

"I wish I could have said let's go full out in all the games. But it's impossible. That's the hard bit for me - knowing that if I do play the same eleven again on Tuesday and Thursday, it's impossible," Solskjaer added.

"I run too much of a risk of injuries so talking about integrity in the league and stuff, don't blame me when I have to make changes, because I have to. It's not safe... I've got to prioritise."

United have 70 points from 34 matches, 10 points behind local rivals Manchester City who have played a game more.