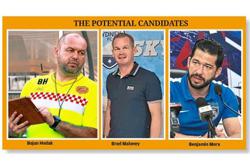 Past and present: A montage of legendary footballer Datuk Soh Chin Aun. — www.fam.org.my

Until today legendary skipper Datuk Soh Chin Ann does not understand why was his name is spelt as Chin Aun. But that name is held in high esteem as one of the best defenders in Asia at the height of his powers in the 1970s.

“When I pointed out the correct spelling of my name to my media friends, they simply shrugged it off. Perhaps they thought Ann was girlish. So the name Chin Aun stuck.”

The Malaysian and Singapore papers carried his name as either Chin Aun or Chin Ann with no uniformity.

But the moniker Towkay unmistakably belonged to Chin Aun.

The Melaka-born was a composed centreback blessed with the burst of speed and the ability to command the team with his leadership qualities, besides his occasional forays into the opponents’ box.

First selected to don national colours in the Thai King’s Cup in Bangkok in 1969 when he was barely 19, Chin Aun was an international player young enough to represent the youth side in the Asian Youth Championship on two occasions – 1969 and 1970 and enjoyed a colourful career until his retirement from international duty in 1984.

Following the retirement of M. Chandran and later Namat Abdullah (both conferred Datukship later), Chin Aun was handed the captain’s armband beginning in 1975, an honour he carried to his final match in the Asian Cup qualifiers in October 1984.

(Records show Chin Aun made 252 appearances for Malaysia, which may have included non-A matches).

Although he remains the only Malaysian to be part of the national team in two Olympic Games (1972 and 1980), Chin Aun’s most memorable moment was when Jalil Che Din’s men scooped the bronze medal in the Asian Games in Teheran in 1974.

His fling with politics ended with defeat in the Kota Melaka parliamentary seat in the 1986 General Elections. His true legacy, unquestionably, lies in football. — Football Association of Malaysia