Not short of help: Kedah striker Kpah Sherman is one of 23 players who are represented by the Professional Footballers Association of Malaysia.

PETALING JAYA: The Kedah wage row has gone to the Professional Footballers Association of Malaysia (PFAM) with many of the players reporting their grievances to the association.

This was confirmed by Football Association of Malaysia (FAM) secretary-general Stuart Ramalingam, who said there was communication between the players and the state body.

The PFAM have now sent a letter to Kedah with a timeline for settlement. The Red Eagles management will have to settle the arrears by a specific date.

“For now, they have not had any official communication with FAM. However, we are privy to their communication, ” said Stuart.

“I believe it will reach us soon if they do not solve the matter according to the timeline. PFAM are representing 23 players, including one foreign player Kpah Sherman.”

As for Melaka, Stuart did say that Naruphon Wild Putsorn’s revelation that he had gone to FIFA to report salary delays will have a bearing on the team’s licence for the 2021 season.

Asked if any local Melaka players had reported salary issues this season, he said none had come forward so far.

“We did deduct points this season because they did not respect the 2019 salary arrears issue. It is more or less settled.

“As for 2020, nothing has been reported. Naruphon’s case is between FIFA and Melaka now.”

The salary issues have been happening for years with seemingly no solution in sight.

Stuart did say that the club licensing and privatisation process undertaken by the FAM will put an end to this menace soon.

“The privatisation process is meant to instil some responsibility among owners on the importance of administration and financial management. We are bound to face some issues with the current set-up of certain clubs.

“The stability of football in some states is dependent on the transition of presidents and executive committee members.

“The exercise is a step to mend these issues. FAM have already exercised footballing sanctions this year on teams like Melaka and Police. We are following FIFA’s modus operandi of transfer bans and points deduction to ensure teams discipline themselves.” 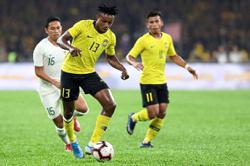 FAM: Show us the money or it’s game over