Goal machine: Zainal Abidin during his playing days with the national team.

This year, another Malaysian has been globally recognised for his goalscoring feats.

Former international Zainal Abidin Hassan has been listed in the Global Soccer Awards’ Top 10 All-Time International Goalscorers for scoring 78 goals from 1984 to 1996.

In the list that was published on April 6, the former Selangor and Pahang player was placed seventh, upstaging the likes of Brazilian legend Pele (77 goals), former Kuwaiti international Bashar Abdullah (75) and India’s top striker Sunil Chhetri (72).

The Melaka coach, who earned 180 caps for Malaysia, said it was an honour to be recognised by the United Arab Emirates’ based organisation.

“It’s a nice recognition to be among the world’s top goalscorers. When I don the national jersey, my aim was always to do my best, ” said the 57-year-old who played for 12 years with the national team.

“This recognition is due mainly to my teammates. Without them, I would not have been able to achieve this.”

Saeed was sixth as he has lesser caps than Zainal.

When asked what was the secret behind his goalscoring feats, Zainal said it’s just plain hard work during training.

“Training makes you perfect. Just work hard and the results will come.

“Through training, you can identify and rectify your weaknesses.

“One has to understand that it’s a totally different ball game at international level. Only hard work can take you far.

“During my time, I had the privilege of playing with the late Mokhtar (Dahari), my best friend Dollah Salleh and others. They know my style, so it makes scoring goals that much easier.” 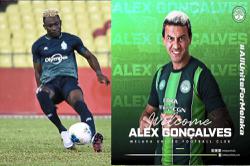