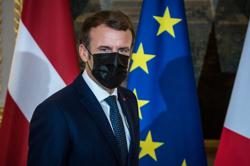 PETALING JAYA: National track cyclist Mohd Shah Firdaus Sahrom may still be carrying the psychological scar from his crash at the Tokyo Olympics two months ago.

The effect was evident in his weak performances at the World Track Championships which saw him not progressing beyond the first round of the men’s keirin in Roubaix, France, on Thursday.

He finished fifth in the first-round heat won by defending world champion Harrie Lavreysen of Holland and had to go through the repechage but did not survive.

Shah Firdaus was eliminated after finishing third while Sebastien Vigier of France won the repechage to go through to the second round.

It was a Dutch show of power in the final as double Olympics champion Lavreysen beat teammate Jeffrey Hoogland to claim his eighth career world championships gold medal.

Assistant coach Harnizam Basri felt Shah Firdaus was not able to give his best performance.

“I feel he was too conservative in his race approach to avoid crashing or falling,” said Harnizam.

“This was his first race after the Olympics. His form was not at the optimum level after resting for a month since returning from Tokyo.”

Shah Firdaus bounced back from a high speed crash during the men’s keirin first round in Tokyo to reach the quarter-finals. The trauma of the crash, however, clearly had an effect on the 25-year-old as his challenge fizzled out in the last eight.

Harnizam said the Malaysian cyclists also did not have enough time to get used to the track as they did not take part in the team sprint unlike the Europeans.

“We only had the chance to check out the track two days before the competition started because of the Covid-19 protocols. I hope he will be ready for the sprint event on Saturday (today),” he added.

Mohd Fadhil Zonis will next compete in the qualifying round of the men’s 1km time trial event.

The in-form Hoogland will be one of the favourites in the men’s 1km time trial along with his teammate and defending champion Sam Ligtlee.