Cyclist shows heart of a fighter to reach last eight 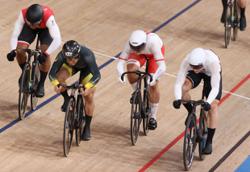 Hats off to Mohd Shah Firdaus Sahrom. The Olympic debutant showed the heart of a fighter when, despite suffering from nasty skin abrasions from a crash, he picked himself up, got back on his bike and stormed into the keirin quarter-finals.

The 25-year-old Johorean used every ounce of his energy to power his way from the back in the repechage to join Azizulhasni Awang in the last eight at the Izu Velodrome today.

Shah Firdaus was sent crashing when he collided with Britain’s Jack Carlin in Heat 2 of the first round yesterday.

He pulled out from the restart and put everything on the line in the repechage where he qualified in second place.

Former world champion Azizul, meanwhile, enjoyed a smooth passage when he won Heat 3 ahead of Trinidad and Tobago’s Nicholas Paul.

Azizul had only praises for his teammate.

“Shah was a warrior today. I’m not surprised as mentally he is not about to give up on his dream without a fight.

“I was on the side as my race was coming up when it happened. I feel sorry for him as he had some serious skin burns.

“But it’s common to fall when you are blocked while trying to sprint,” said Azizul.

The Pocket Rocketman added that he was satisfied with his performance.

“My aim was to get a clean passage without needing to race in the repechage.

“I want to save my energy because of the likelihood that we will have to race three times (quarter-finals, semi-finals and final) tomorrow.”

In the quarter-finals today, Shah Firdaus will be in Heat 2 with Carlin, Germany’s Maximilian Levy, Callum Saunders of New Zealand as well as Suriname riders Paul Nicholas and Jair Tjon En Fa.

Azizul will be up against Australia’s Matthew Glaetzer, Germany’s Stefan Boetticher, local hope Yuta Wakimoto, the ROC’s Denis Dmitriev and Kwesi Browne of Trinidad and Tobago in Heat 3.

The top four from each of the three heats advance to the semi-finals.

Coach John Beasley said he feared the worst and thought Shah Firdaus had broken his ribs as he was having difficulty breathing after the race.

“The initial report says there’s no broken ribs and, fingers crossed, he will be okay tomorrow.

“We waited five years for this and I never thought that one of them is going to end up in hospital,” said the Australian. 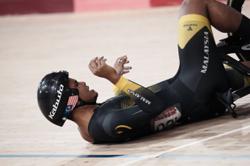 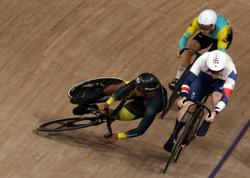