A group shot of the coaching seminar participants in Klang. (Right) In high spirits at the event were (from left) See, Hazi and Low.

THE Softball Asia Baseball5 coaching seminar held at Botanic Resort Club, Bukit Tinggi and SK Puala Indah in Klang proved a huge success and gave a clear indication that the sport is heading in the right direction.

Held under the auspices of the World Baseball Softball Confederation (WBSC), the two-day event drew 63 participants who comprised teachers and coaches from various state associations and clubs, as well as Pakistan, Singapore and Vietnam.

There was a general feeling of excitement and enthusiasm during and after the course that was conducted by instructors Ran Liu of China, Japan’s Ayako Rokkaku and Itsarapong Oyaree of Thailand.

More importantly, before departing, the participants pledged to spread the sport in their respective regions.

Played on a much smaller area than the conventional sport, with fewer players (just five), over a shorter period (10 to 15 minutes and five innings) and no equipment required except for a rubber ball, B5 is simple to get started with.

It can be played on a hard court or field and is also a mixed gender game.

Softball Asia president and WBSC secretary-general Datuk Low Beng Choo said at the coaching seminar, “The game may be new but it has caught on like wildfire in other parts of the world and there are already plans to stage an Asian Baseball5 championship to be used for qualification for the World Cup Baseball5. 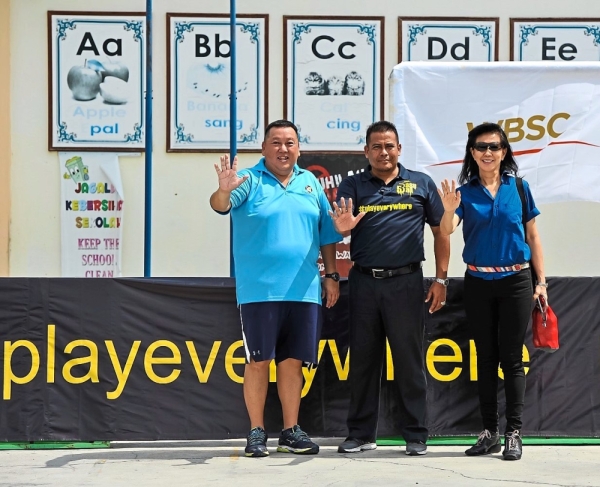 In high spirits at the event were (from left) See, Hazi and Low.

“Thailand is interested in hosting the Asian championships early next year and we are excited about this,” said Low.

“This sport is really in line with the International Olympic Committee’s (IOC) vision of being young and urban, and we are also working towards preparing Baseball5 as a showcase sport at the Tokyo Olympics.

“We are also hoping that we can get Baseball5 into the next Youth Olympics which will be held in Dakar, Senegal in 2022.

“With this, we aim to introduce Baseball5 at all levels here, especially in schools, colleges and universities, to popularise the game,” she added.

Low said to develop and grow major sports, they must be easy to play, exciting, fast, inexpensive and with access to playgrounds.

“Many (sports) have reduced their number of players in the game and taking them to exciting new grounds like the beach, open air, indoor courts, hard courts and the streets. And in a way, Baseball5 is like a street version for us.

“I see no problems because it is an exciting game that can be played everywhere with just a ball, bases, a small area and just five players on a team,” she added.

The regional supremo explained that Baseball5 was promoted by WBSC through the softball division.

“Although many may mistake it for a baseball game because of the name and acronym B5, the name was actually coined by combining “base” (the bases used in the game), “ball” (one ball used) and “5” (five players).”

Softball Association of Malaysia president See Kok Wooi said it would “definitely catch on” in schools and that there were plans to include it in the schools’ sports calendar.

“First and foremost, on our agenda is to organise a national Baseball5 championship and we urge all our affiliates to familiarise themselves with the game and form their state team. So, for starters, the states can organise their state championship,” added See.

SK Pulau Indah headmaster and former Selangor schools softball coach Hazi Kadir, who also played a key role at the seminar by offering the school facilities, said he planned to propose to the Education Ministry and Malaysian Schools Sports Council to include Baseball5 in the schools’ sports curriculum.

All the participants at the event underwent a test and were presented with certificates of participation.